1. Despite what I thought at age 11, the world does not revolve around me.

2. The beginning of anything is always the hardest.

3. There’s a fine balance between having a thick skin and a thin skin. It’s difficult to allow negativity and rejection to roll off while still having the self-awareness to know when you need to change. Perhaps having a patchwork skin is best? (And I am SO SORRY for that mental image, dear reader.)

4. Similarly: people don’t change, particularly if you push them to change. If you can’t accept someone for the way they are, move on (and take a closer look at yourself).

5. Good quality cheese tastes so much better than Kraft singles.

7. The most valuable things in life don’t come easy. If something is just handed to you without a struggle, have you really grown as a person?

8. Despite being 28, I still need to remind myself to appreciate what I have right now rather than realize what I’m missing when it’s gone.

9. F = ma is the root of everything in the universe. That Newton was a smart guy.

10. Nothing is worth lying awake for. Except perhaps waiting to open Christmas presents!

11. The world is so specialized now that it’s best to trust trained professionals while still keeping common sense and ethical standards on high alert. That said, I still want to be a Renaissance woman. (And yes, this is a shameless plug to recognize many registered dietitians as nutrition professionals rather than TV, the Internet, or your best buddy who read an article once.)

12. It’s okay to quit, especially if what you’re clinging to is a mistake you’ve made three times already.

13. If I don’t eat enough during the day, I’ll make up for it later by eating too much and making poor food choices.

14. It’s much better to take care of your health now instead of trying to fix it later. It makes me sad that many people still don’t recognize their bodies are a product of what they eat.

15. An oldie-but-goodie: If you try to please everyone, you’ll end up pleasing no one.

16. Every single time I’ve gone into a task with preparation and perfect confidence that I’ll rock, whether it’s performing a violin solo, drilling a hole through sheet metal in this EXACT spot, or giving a presentation to a prestigious research community (and I’m first on the roster, egads!), I’ve nailed it. Going along with that: you know that phrase “fake it ’til you make it”? Totally true.

17. That nursing home resident who yelled at the nurses and called you in to complain about her frozen yogurt being runny? No one had had a pleasant conversation with her all day. Sometimes, all someone wants is to be listened to.

18. I feel so much better when I eat well and exercise.

19. If you don’t see it, you don’t miss it. This applies to junk food, negative people, and that new kitchen appliance you’ve been hankering for.

20. Standing up straight and wearing flattering clothes will do remarkable things to your energy and confidence.

21. How to look natural in pictures: pretend someone you love is taking the picture.

22. Chocolate goes well with almost everything.

24. It’s okay to hate exercise. If you’re an able-bodied person, it’s not okay to use that as an excuse to sit around all day.

25. The more often I do something as part of a routine, the more likely I am to keep doing it. The Good: I dislike exercise, but I’ve made it part of my daily routine for so long, I feel antsy when I skip it. The Not-So-Good: When I get into a habit of reaching for heavy desserts after dinner, I’ll continue to do so even when I’m full.

26. Another oldie: Mistakes aren’t necessarily bad. The biggest mistake you can make is not trying because you’re too scared to make a mistake.

27. No one’s opinion about yourself is as important as your own.

28. Having someone in your life who loves you, listens to you, makes you feel better about yourself, and with whom you have mutual respect? Now that’s really something. 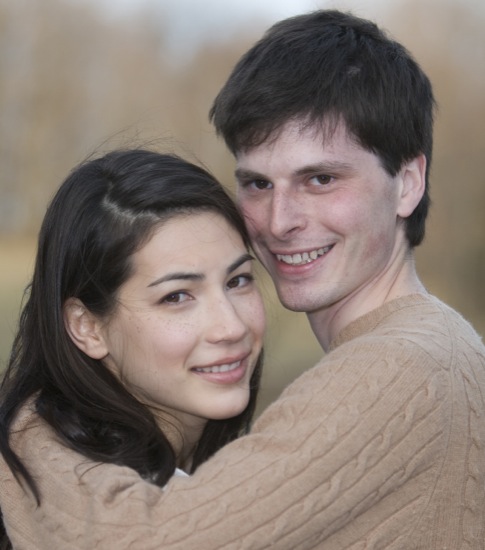 Edited to add: By request, a pinnable version: 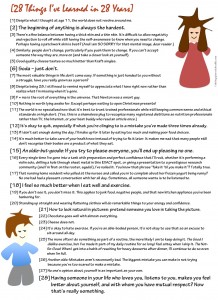