This post is adapted from my guest post on Stone Soup, the blog of Food and Nutrition Magazine, which is a publication of the Academy of Nutrition and Dietetics. 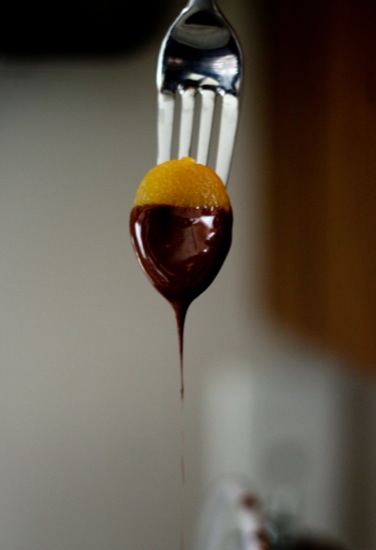 Just the word conjures up the taste of rich hot cocoa and the snap of a pure chocolate bar. For some, it is tied to the memory of a favorite birthday cake or the fluttering nerves of a first Valentine’s Day date. For others, it’s an everyday treat to be slowly savored with a mug of coffee.

We often think of chocolate only in the context of a sweet dessert. Yet, the chocolate we know today is quite different from how it was consumed originally. Did you know that during the vast majority of chocolate’s 2000-year history it was enjoyed as a beverage—and not even a sweet one? As far back as 1400 B.C.E., chocolate was prepared as a bitter drink that was sometimes fermented. It wasn’t until after Europeans set foot in the Americas that chocolate was sweetened. The first chocolate bar was created hundreds of years later, in the mid-19th century.

Today, chocolate is big business, with Americans buying more than $345 million in chocolate candy during Valentine’s week, making up 5.1 percent of annual sales. How much chocolate do people eat around the world? 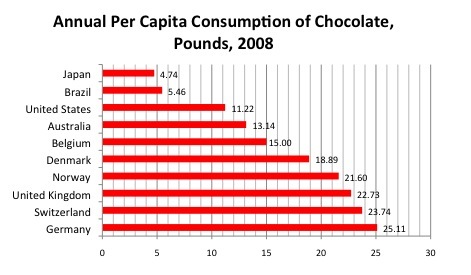 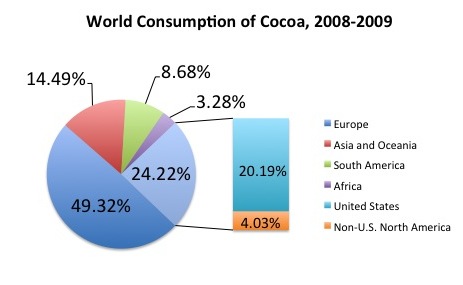 With the abundance of chocolate in stores across the U.S., we may think we eat the most of anyone. Not true! People in Germany, Switzerland, and the U.K. eat about twice as much chocolate per year as those in the U.S. Europeans consume nearly half the world’s cocoa, while Americans consume just over 20 percent.

Enough statistics. How about nutrition? Cocoa contains vitamin E and some of the B vitamins (thiamin, riboflavin and niacin), as well as minerals such as magnesium, copper, phosphorus and zinc. Check out the chart below for a breakdown of macro nutrients in different types of chocolate: 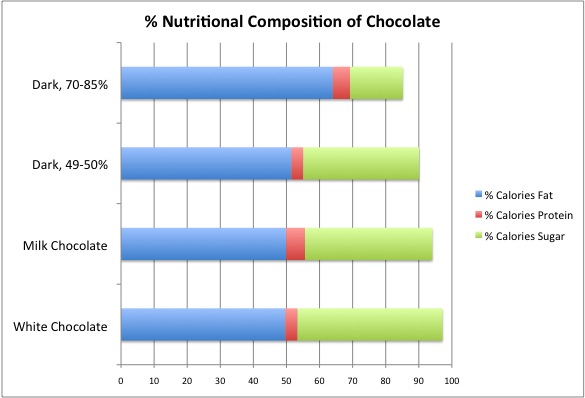 Surprisingly (for me, at least), dark chocolate tends to have a higher percentage of calories from fat than milk or white chocolate. This trend is due to the fact that dark chocolate tends to have more cocoa butter added to it to help it flow better. I would not have know this before we got our own chocolate temping machine and struggled with stiff dark chocolate. Notice that as you move from dark chocolate to white chocolate, the percentage of calories from sugar increases. This makes sense: if you take away the cocoa, you need to replace it with something. Sugar to the rescue! Finally, note the percentages don’t add up to 100 percent. This is partly due to rounding and mostly due to the other things in chocolate, such as fiber.

Chocolate is also rich in flavanols, a substance that protects the body against oxidative damage and may help improve blood flow to the brain and heart. To benefit from these flavanols, choose dark chocolate over highly processed milk chocolate and cocoa powder that has not undergone Dutch processing. Enjoying an ounce of chocolate once in a while is something to which I can raise my glass!

While I had my open hours at Strawberry Fields last weekend, I offered these chocolate-dipped apricots for customers to nibble on while they asked me questions. They were a universal hit with everyone (well, except the kiddie who swallowed the chocolate and spat out the apricot. Can’t get them all, I guess.) 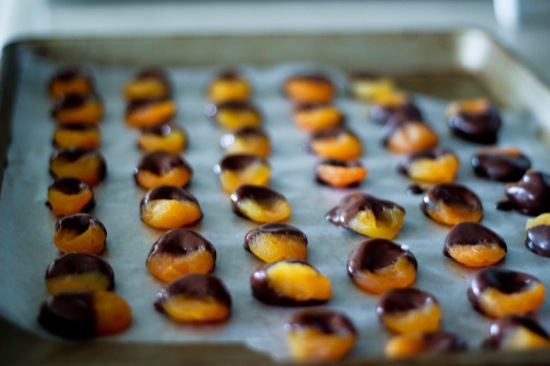 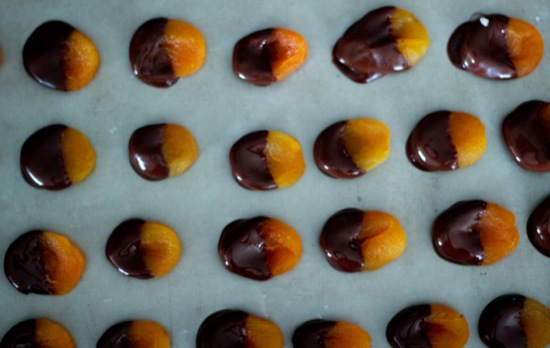 Looking for more chocolate recipes? Give these a try!

P.S. No post this Friday – I’m flying to Colorado for a lovely long weekend with my dad and sister.

Why yes, yes I was. I’m going again because (a) I have a few extra days off between large projects, and (b) plane tickets are so darn cheap from here. Who knew?

See you on Monday, dear reader!