Shortly after I mentioned in my last post that I would get the recipe for amaranth granola from my sister Courtney, I heard my email program announce the arrival of a new message.

In my inbox waited the recipe for this granola: 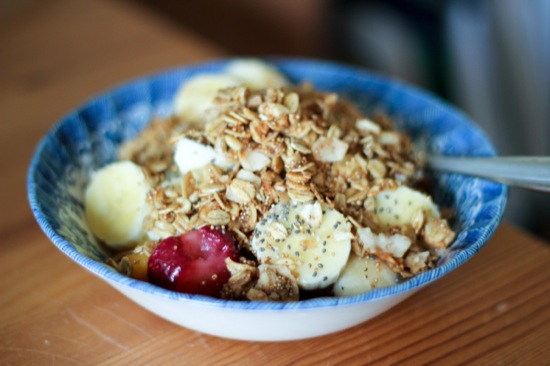 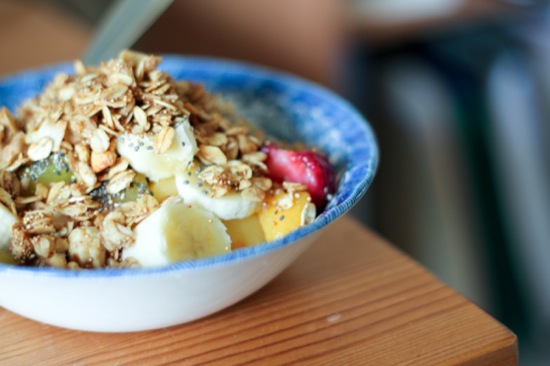 Amaranth is a protein-packed little grain rich in fiber and some essential amino acids (Edited to add: Just to be clear, amaranth is a seed that’s called a grain 🙂 ). It’s a shame amaranth isn’t used much in the U.S. – this grain is seriously tasty. You can find it online or in your local natural foods store.

Sprinkled on top of a smoothie: 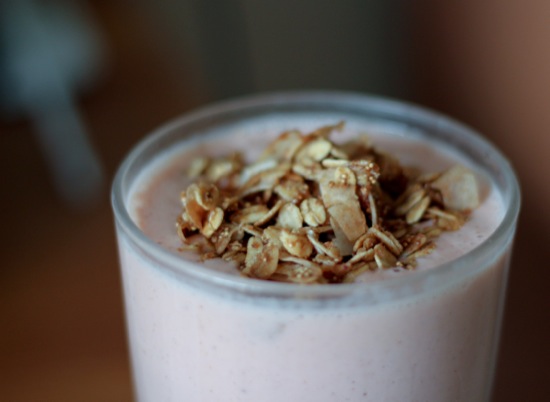 Courtney’s recipe is adapted from this one. She made it lighter by cutting the amounts of fat and sugar, neither action of which interfered with the deliciousness of this granola. Nice job, sister!

Preheat oven to 350°F. Heat a frying pan over medium heat and add amaranth. Use a lid or splatter screen to cover. Shake the pan continuously until about half of the seeds have popped, about 1 to 2 minutes. Set aside.

Combine canola oil, brown sugar, and honey/maple syrup in a small saucepan. Heat gently over medium-low heat until brown sugar has dissolved. Bring to a boil and cook until slightly thickened, about 5 minutes. Remove from heat and stir in vanilla, salt, and cinnamon. Set aside.

Combine sugar mixture, cashews, coconut, and oats to amaranth and stir. Spread evenly on a baking sheet. Bake until lightly browned, about 15 minutes, stirring every 5 minutes. Remove from the oven and place on a wire rack to cool completely. Stir in dried fruit if desired.

Have a great weekend, dear reader!

Q: Have you ever tried amaranth? How did you prepare/eat it?