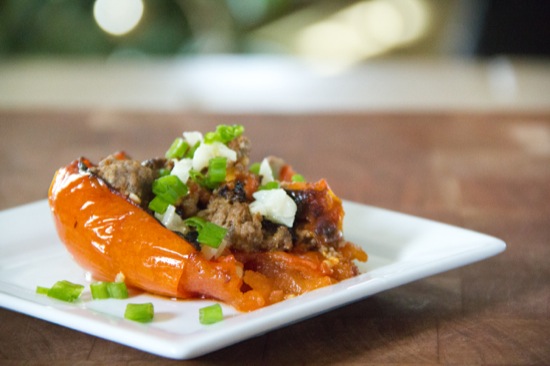 With the craziness this fall, I’ve cooked as many times as I can count on one hand — if that hand was wearing a mitten. And when I say “cook,” I mean “drag out a cookbook and actually combine ingredients in a new or semi-new fashion.” (It’s like a new language, I swear. For example, when I say “celery,” I mean “foul weed that could kill a man (or Super RD) from ten paces.”)

What a shame, dear reader, because there are so many wonderful dishes to make in the wide, wide world. That’s why I’m so grateful for The Recipe Redux. Once a month, I set aside time to enjoy an hour or two in the kitchen to tackle those kitchen challenges that bring out the creativity I miss.

It’s the end of the year and we’ll taking a moment to reflect: ReDux has been around for 42 months! (Can you believe some of you have ReDux-ed 42 recipes?) To celebrate, we’re playing a little party game this month: Grab your nearest cookbook and ReDux the recipe on page 42 or 142. We can’t wait to see the books you’re cooking from these days – and how you make that recipe healthier.

My first instinct was to dive into one of my most influential cookbooks, The Little House Cookbook. Then I found that the author had devoted page 42 to a description of dairy foods in the late 1800’s and page 142 had a recipe for lard and crackings. Yes, lard.

Instead, I opened a cookbook Peter bought for me after our return from Cambodia (what? You didn’t know we went to Cambodia? Wait ’til I tell you THAT story. Probably sometime next year.) The Elephant Walk contains a recipe for my favorite Cambodian recipe: loc lac. This simple marinated beef dish highlights the simple, fresh flavors that make Cambodian cuisine so special. Naturally, I wanted to try another. 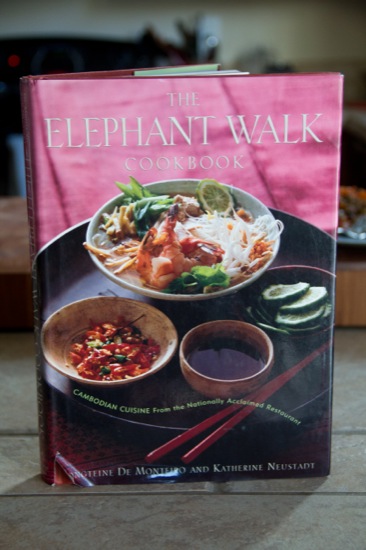 The Elephant Walk had no recipe on page 42, so I chose the recipe on page 142: braised tomatoes stuffed with pork. I decided to use lean bison in place of pork because bison has plenty of iron and protein while also being very lean. Also, I may or may not have had no pork on hand. I’ll never admit it either way. I cut down on the salt and oil and used plenty of scallions for color and flavor — I cleverly added sliced scallion greens to the final dish to haphazardly add a bit of class to a stuffed tomato that’s about to give up. 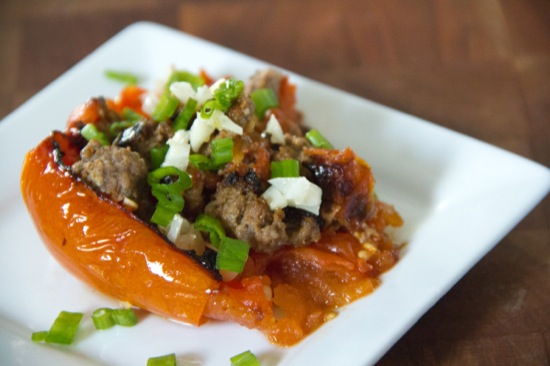 I blame the recent lack of time in the kitchen for my rusty presentation skills. It’s like the tomatoes are rejecting the super-healthy filling, and I tried to cover it up with scallions and garlic. Dear me. The tomato-cooking step left a mess in the kitchen like you wouldn’t believe. I will not be posting THAT picture on THIH (but, you may see it in Kitchen Disasters. Just sayin’.)

Nevertheless, this dish was delicious. The tomatoes have a crisp edge and a melt-in-your-mouth texture, while the lean bison and sautéed garlic hit the spot. This dish would make a nice light meal (as this one did) or a complete meal rounded out with some more veggies and a crusty baguette.

Just remember: Keep your eyes on the tomatoes. They’re prone to spontaneous combustion.

Cut off the top 1/2 inch of the tomatoes and use a spoon to scoop out the meat into a medium bowl. Turn tomatoes upside down on to a paper towel to drain.

While tomatoes drain, mix together bison, egg, the white part of the scallions, cilantro, sugar, soy sauce and black pepper in a large bowl. Mash the reserved tomato meat and add 1/3 cup to the bowl.

Turn tomatoes right-side up and stuff with the bison mixture. Heat oil in a large skillet over medium heat and saute chopped garlic for 30 seconds. Use a slotted spoon to remove to a paper towel-lined plate and set aside.

Add the stuffed tomatoes, cut side down, and partially cover. Reduce heat to low and cook for 25 minutes. Use tongs to flip tomatoes right-side up and cook until meat is done, about 25 minutes more. Remove to serving plates, top with sauteed garlic and sliced green scallions, and serve immediately.

P.S. Want to try another bison recipe? Try this incredible bison chili with chickpeas and squash!

P.P.S. Check out the other awesome recipes below: