Not together, of course! (Although, come to think of it, that combination doesn’t sound too bad.)

I ate a lot of interesting foods today — some good, some not so much. But, part of being an amateur adventurous eater is experiencing both the yum and the yuck.

WARNING: Skip the next three paragraphs if you don’t like physics.
I began my morning with a fun run on the treadmill. Like any nerd, I starting thinking running on a treadmill vs. running outside. Even though you are “stationary” to someone who standing next to you while you are running on a treadmill, you as the runner don’t feel like you’re standing still — you’re working! How can you be working if you’re not going anywhere (to the outside observer)?

Imagine if you were running outside, and your observer buddy was driving along next to you in a car at the same speed. Just like in the treadmill scenario, your buddy sees you as stationary. It’s all a matter of reference frames. A treadmill simulates running on actual ground.

Of course, this comparison only works in an ideal world. A treadmill is springier than a paved road, and the human body is complicated enough so that the running on a road and running on a treadmill are NOT the same thing. Don’t you guys all think about this when you’re running? 😉

Back to the foodstuffs:
I’m sure many of you knew that Whole Foods held a Chocolate Fest today. Yes, a CHOCOLATE fest. I was expecting booths and booths of every chocolate delicacy Whole Foods carries (and there are a lot of ’em), but there were only a few booths, and the treats on display were more like this: 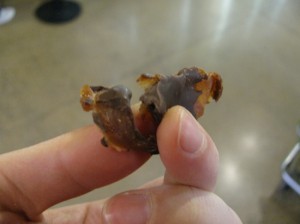 Do you know what that is? … Yup, it’s chocolate-dipped bacon. That’s right: the epitome of class. 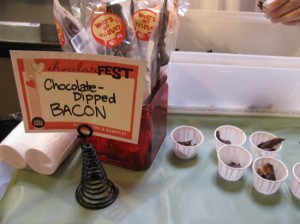 Not liking bacon much anyway, I concluded that the chocolate did not improve it. Chocolate is best eaten alone and bacon not at all (or rarely). At least, not this bacon :/

Most of the other samples were similarly not great, although this hot chocolate from Green & Blacks was like drinking melted chocolate. 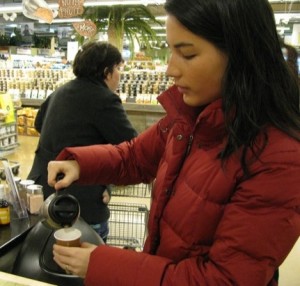 Something as rich as this drink is wonderful to enjoy slowly, so that I can be satisfied with less. Have you guys experienced that feeling when you drink (or eat) something really rich so fast that by the time you realize you’re full you’ve already had too much? I don’t like that sickly feeling I get when I overdo it, so I try to remember that feeling whenever I’m tempted with a rich food (often involving chocolate).

Whole Foods was pretty smart with their Festival timing (11 – 1), because the lunch area was PACKED while we were there. I couldn’t pass up their salad bar, so I piled lettuce to my heart’s content:

During the afternoon, I ate a couple of snacks.  First up is a new fruit: 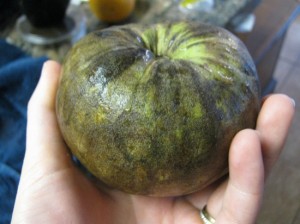 This is a cherimoya, and Andean fruit that grows at high altitudes (although this one came from California). 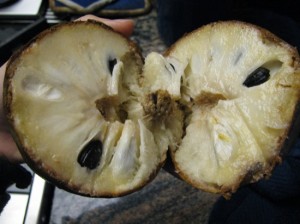 Cherimoyas have soft, pale flesh and large, hard seeds (inedible). They taste sweet and slightly tangy, with a quaint, old-fashioned flavor. Peter and I weren’t big fans of this fruit. Have any of you tried it?

The second snack was kombucha: 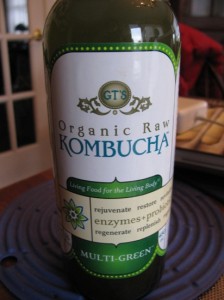 On sale at Whole Foods, yet still pretty pricey. I’ve heard that kombucha is an acquired taste, but I’ve actually liked it since day one. I even tried to make my own kombucha a few months ago: 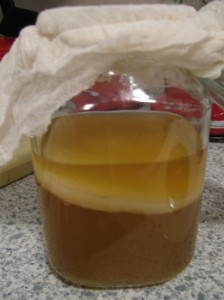 I fermented the green tea for a few days to give it that tangy flavor. Unfortunately, I kept my second batch in a place that was too cold, so the mixture went bad. I’m planning on trying again once the weather warms up.

On the way out to dinner, I saw a reminder of why I like to carry a camera: 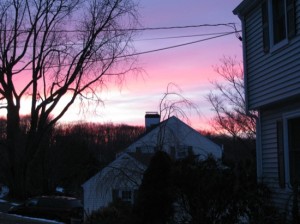 Dinner was at a place we had been talking about for a few weeks: Shady Glen. If you live in Connecticut, you know what I’m talking about. This diner is practically an institution in the state. Peter has eaten there a few times, but not for many years. 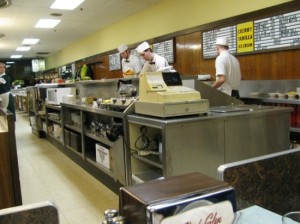 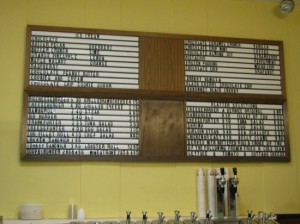 Like any “famous” diner, the menu is small and mostly revolves around burgers, fries, and ice cream. We each ordered a cheeseburger with their signature crispy cheese. 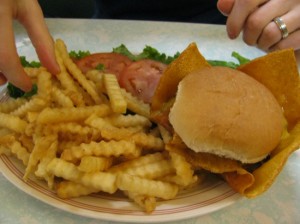 Look at this milkshake: 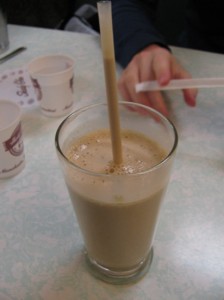 Verdict? If you’re from CT, please don’t hang me, but … I didn’t like it. Of course, I have admit that I don’t like hamburgers in the first place, but these burgers reminded me too much of McDonald’s (of which I used to eat plenty as I was growing up). Mass-produced, previously-frozen patty on a mass-produced, flavorless bun. The crispy cheese was interesting, but the taste did not live up to the appearance. For a treat dinner, this one was disappointing.

After all the chocolate I sampled today, I didn’t feel much like having dessert, so instead I roamed the apartment looking for cute doggle poses.

Nero didn’t let me down. 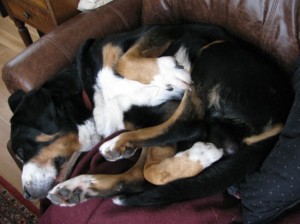