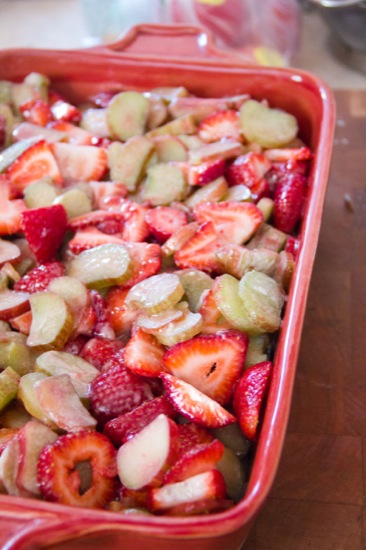 Rhubarb is one of those foods that people either love or hate.* Pleasantly tart and sour to some, like choking down Class 8 Hazardous Materials to others, gently-cooked rhubarb often finds its way into desserts.** It’s botanically a vegetable but devoured like a fruit***; in fact, it’s so often used in pies and tarts, rhubarb is also known as “pieplant.” During my China studies, I learned that rhubarb is also used to cool the body and keep things, ahem, moving.

*Although I have yet to see an “I Hate Rhubarb” site as vehement as the anti-cilantro contingent.
**I did try raw shaved rhubarb over a restaurant dessert once. It was like chewing tart celery. And I didn’t think celery could get any worse.
***”Rhubarb Identity Crisis” would make an awesome band name. Up for grabs, people. 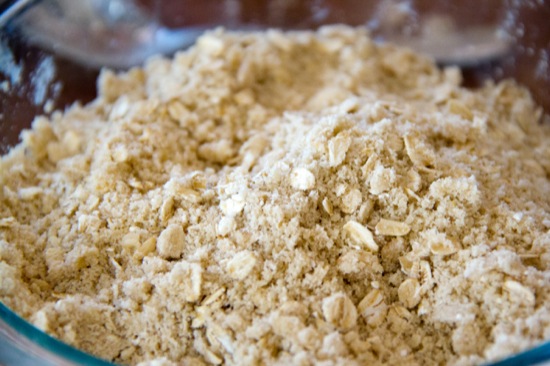 Typical taste buds tend to prefer a bit of sweetness to temper the tart of pieplant. This preference can be expressed by something I like to call “The Rhubarb Meter.” 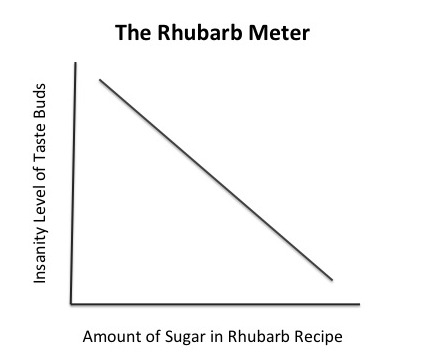 As you can see from this totally scientific graph, most sane taste buds like sweet flavors with their rhubarb. And then there’s me. 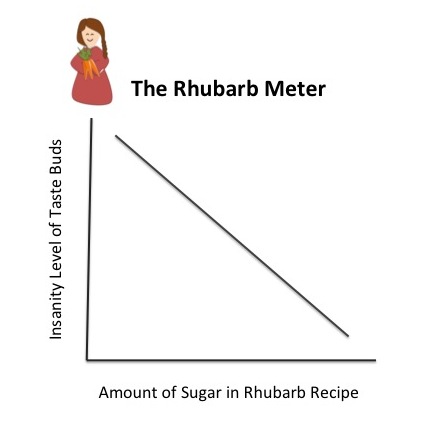 One of my favorite yogurt toppings is plain rhubarb stewed in a saucepan over medium-low heat for 10-15 minutes. If I’m feeling a little sour, I’d add a few strawberries to the mix.

Why am I using completely legitimate free-form PowerPoint “graphs” to explain this odd preference? Because I want you, my dear reader, to understand the low sugar content of this delicious strawberry rhubarb crisp. If you’re used to sweet flavors the tartness may be a turn-off, but I promise, if you work your way to less sugar, you’ll enjoy the lightly pungent taste of rhubarb without the cloying sweetness (and the crisp will be healthier to boot). 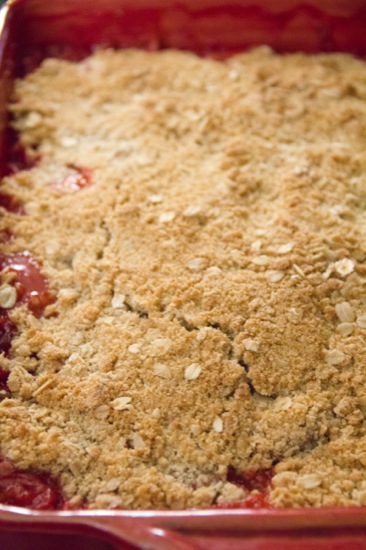 I somehow ended up with no pictures of this crisp served piping hot with yogurt or vanilla ice cream, so you’ll just have to imagine the beautiful deep red of rhubarb and strawberry.

And so I leave you with your mission of the week: Enjoy the taste of rhubarb!

In a medium bowl, mix flour, oats and brown sugar. With cold hands, use fingers to work butter into mixture until pieces are pea-sized. Crumble on top of fruit. Bake 45 minutes or until top is lightly browned. Serve immediately.

P.P.S. Where do you fall on The Rhubarb Meter? Bonus if you can somehow turn it into a parabola.