Doesn’t that sound like a great name for a rock band?

In non-rock band-related topics: can you believe at this time last year, I was in China? Time flies when you’re learning how to be a dietitian! To relive my China adventures, live scorpions and all, click here.

In non-rock and non-China-related topics: I have just completed my penultimate dietetic internship rotation in food service at Jefferson House, a long-term care and rehabilitation facility in Connecticut. Remember my previous posts about what a dietitian does? In this post, I’ll chat a little about what a food service dietitian in a health care setting might do. First, let’s go inside Jefferson House! 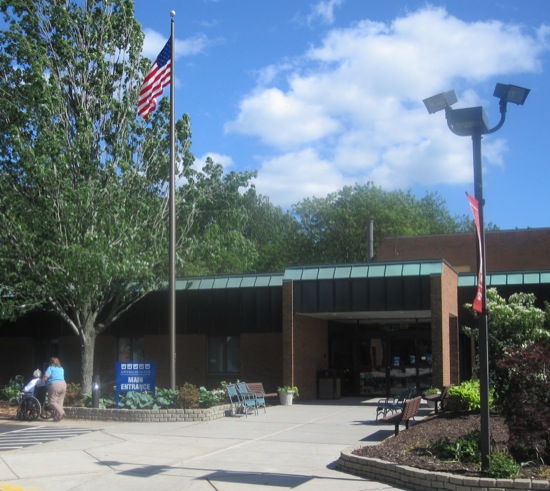 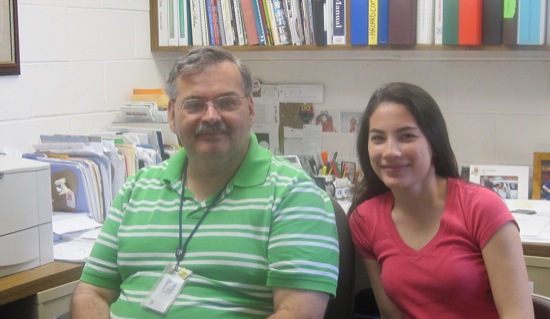 Bill oversees both the kitchen staff and the clinical dietitians at Jefferson House, creating one efficient team that works well together. Part of his success as department director, I believe, is his ability to step into any role required of him: in one day, I’ve seen him both attend a food contract meeting with department heads from other hospitals and unload four pallets worth of groceries into the facility’s storeroom (I tried to help and spent most of my time either struggling to lift relatively light boxes or standing in the middle of the room, asking “Where does this go?” Yeah, I think you were more of a hindrance, Jessie. Also, I need to work on my T-rex arms.)

Bill happily explained his many daily tasks, including ordering food and supplies based on inventory, figuring out the department budget, discussing new food products with sales representatives, reading about the food service industry’s latest news (including changing food prices), reviewing current menus for possible changes, researching new equipment purchases, evaluating the draft contract for an upcoming food contract, reviewing bills and expenses, etc., just to name a few! In addition, Bill operates a catering business that serves both Jefferson House residents/employees and outside groups. To be able to manage all these tasks, one needs to be organized and efficient – Bill certainly has both these qualities in spades! Although Bill is not a dietitian himself, dietitians often hold similar positions. If you’ve been reading my dietitian series, you’ll know that dietitians have many diverse jobs!

I don’t have any pictures of me at a computer this time, because, with the exception of a few projects, I spent most of my time on my feet and in the kitchen learning how a large kitchen operates. An enormous THANK YOU to all the wonderful women and men who work in the Jefferson House kitchen who welcomed me into the facility! You were a huge part of why I had such a great time over the past four weeks 🙂

While working in the kitchen, I learned how food production is carefully timed and organized so that meals reach the residents on time and piping hot (or cold, as the case may be). Everyone has their own job that must be completed by a certain time. People who have not worked in a large-scale kitchen may not realize how much work goes on behind the scenes – I can tell you, it takes a LOT of work to serve those meals.

Here, I have just finished setting up these trays: 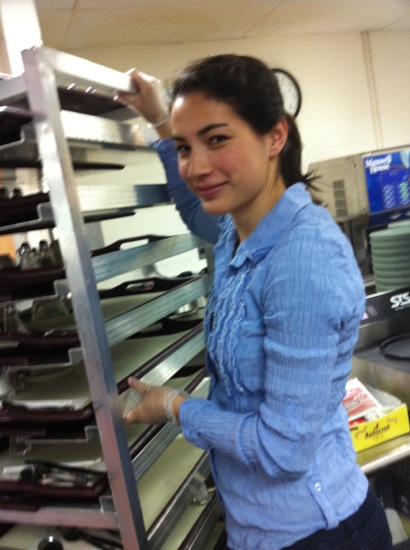 And toasting bread for “breakfast club”, a special breakfast the kitchen cooks for the residents once a month: 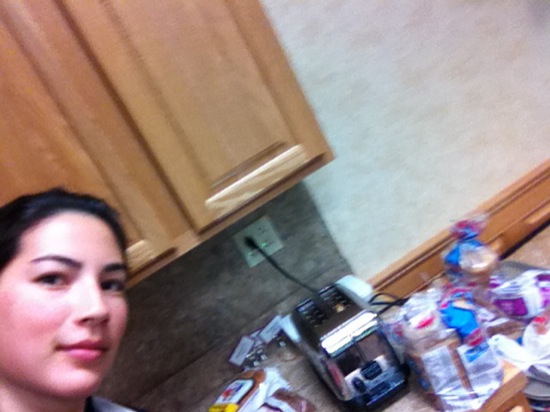 Obviously, I still need to work on my aim when taking pictures of myself.

When working in a long-term care facility, you often need to think about older residents who may either not be eating enough or have chewing or swallowing difficulties. Nutrition supplements to the rescue! I had a chance to finally see some of the nutritional supplements that I had only heard about, including this little gem: 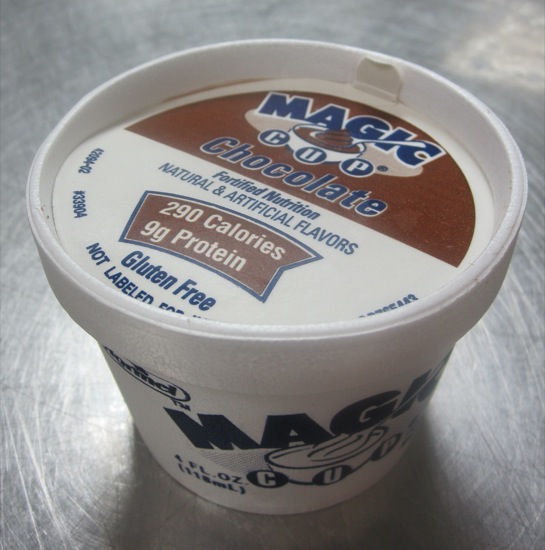 This ice cream-like item is a Magic Cup, a high calorie, high protein supplement for people with swallowing disorders. Often, someone who has difficulty swallowing (due to neurological or physical problems) cannot swallow thin liquids. Even though Magic Cup has the consistency of ice cream when frozen, it doesn’t melt into a thin liquid like regular ice cream does – that could be dangerous for someone with swallowing difficulties. Instead, it softens to a pudding-like consistency.

Like many specialized nutritional supplements, Magic Cup is expensive, so I made sure to get permission from Bill before trying one (thanks, Bill!). I chose the chocolate flavor (of course). 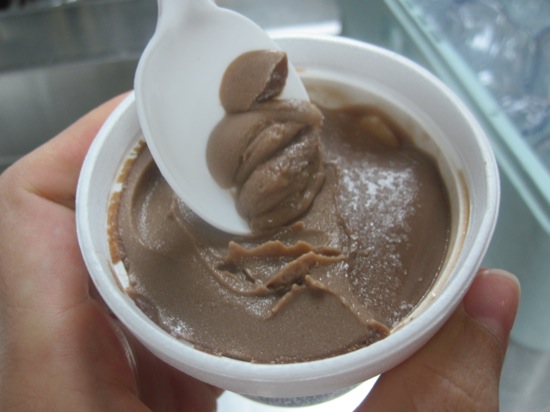 The frozen version tastes almost like chocolate ice cream. I could taste a little “extra”, likely from the additional supplements in this product. When melted, the Magic Cup looks like this: 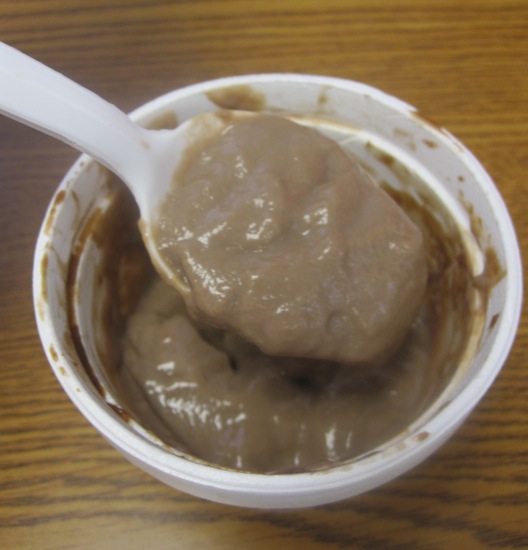 … and, tastes just like chocolate pudding! Mmm. I can imagine that someone who is not eating well and has difficulty swallowing would enjoy a Magic Cup.

Another product for people with swallowing difficulties is pre-thickened water and juice: 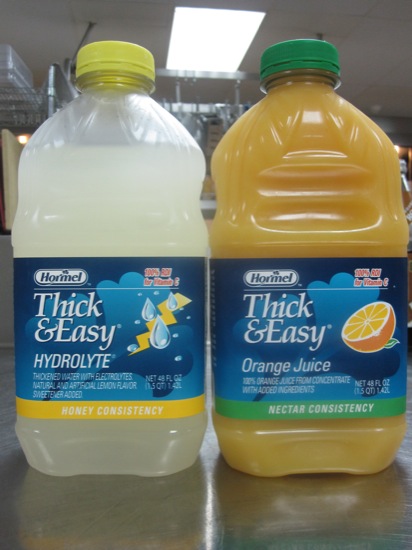 Enlive, a clear liquid supplement for people who are recovering from surgery or who currently can’t handle regular food or liquids: 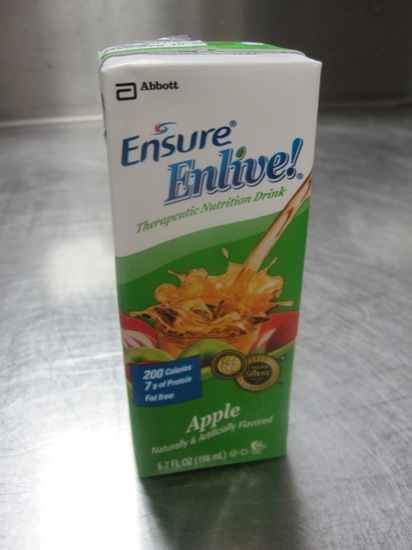 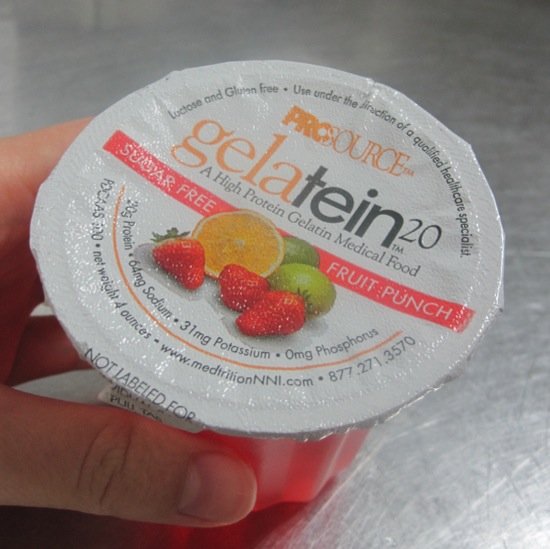 Finally, for residents with oral problems including chewing difficulties, pureed food is available. I love how these pre-pureed foods are reformed in the shape of the actual food. For example, corn: 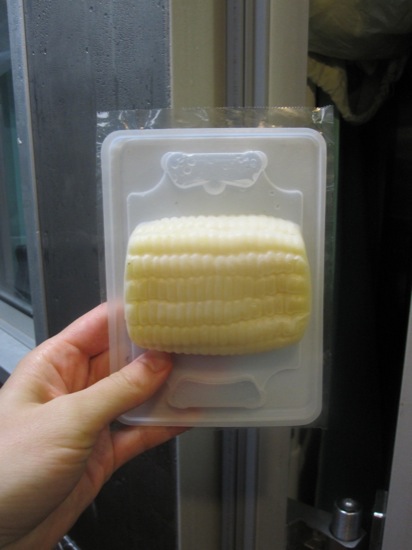 Pureed turkey, with meal tallies in the background: 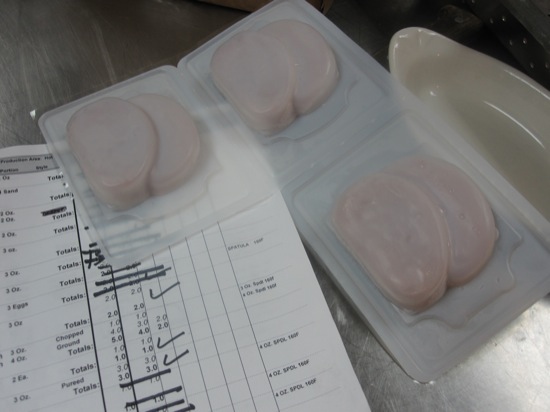 A few other images from my time at Jefferson House:

Pretending to flip burgers for one of the residents’ cookouts: 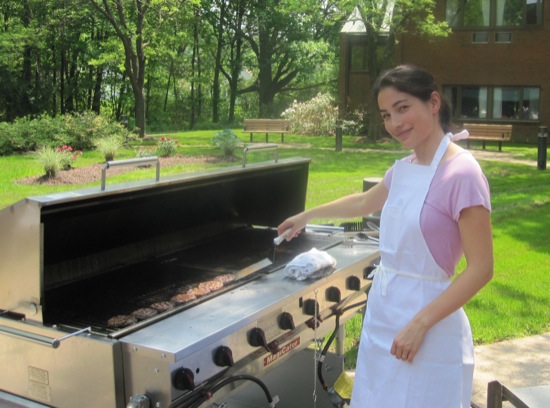 Womanning the table at one of Bill’s catering events: 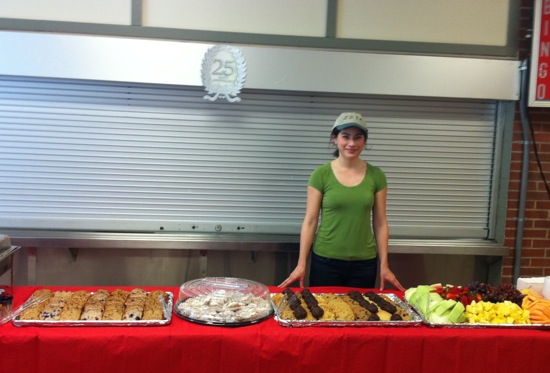 One of my projects during this internship was finding the kitchen a new frialator (I kid you not). Here, I’m standing next to the current fryer: 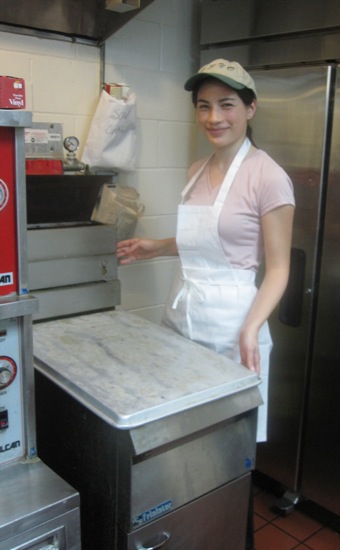 On my last day, everyone in the kitchen threw me a party: 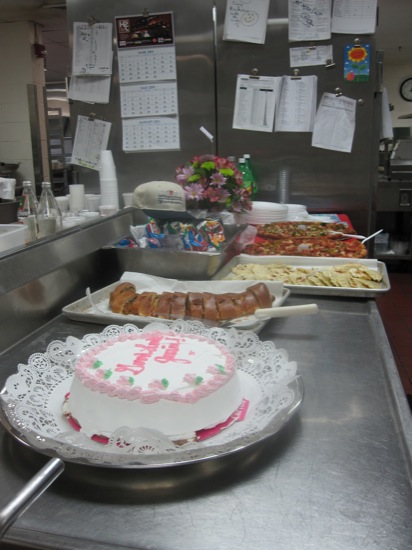 I’ll admit to you, my dear reader: I got a bit teary when I saw this spread. Ladies and gentlemen of Jefferson House, I will miss you tremendously. 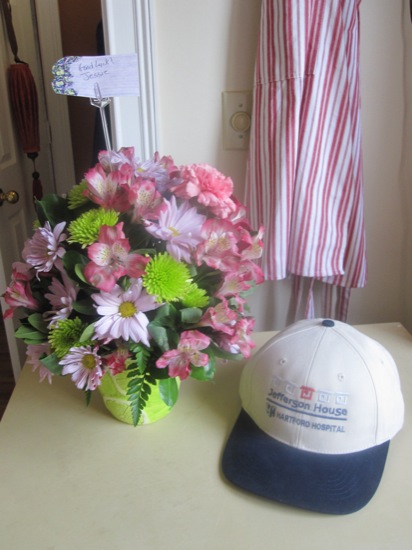 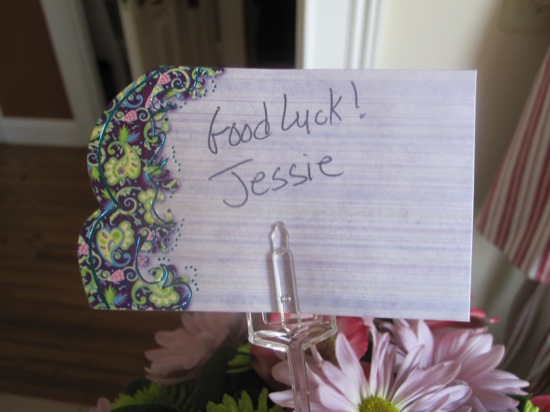 So, there you have it, folks! Dietetics and food service in a health care setting – varied and never boring!

Now, I only have ONE two-week rotation left in my dietetics internship! I can’t believe I’m almost done. For my final rotation, I will be working with Lanette Kovachi, Subway‘s corporate dietitian. I’m looking forward to it!

Have a wonderful week, everyone! 😀

Q: Have you ever worked in a large-scale kitchen? What do you think about those nutritional supplements? Before studying dietetics, I never knew there was a need for these modified food supplements!