Let me set the scene for you: it’s 5:30 on a Saturday evening (aka last night), and I’m responding to comments on my last post while thinking about the new recipe I want to share with you all. While in the middle of a comment, I hear it …

That was the sound of the smoke detector giving a last protest before it switched to battery power. A split second later, all the lights went out. That’s right – no power. No Internet, because our wireless modem was dead (I guess I could have plugged directly into the wall, but … oh well. Hindsight is 20/20, yes no?).

So, that little incident scrapped our plans for dinner. I was going to be all thrifty and flexible and scrounge up a dinner that involved canned beans and little else, but Peter was aghast at that idea and convinced me that we should order takeout instead. Foodie Peter 1, Thrifty Jessie 0.

So we ordered delicious takeout from one of our favorite restaurants: Char Koon. Reader, I enjoyed it.

So today, I finally get to share my recipe with you. Let go over a few images from the day first.

An easy snack: sharp cheddar and kumato with a drizzle of basil pesto: 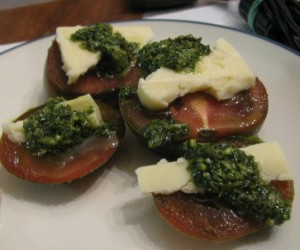 The new cleaver that Peter is working on: 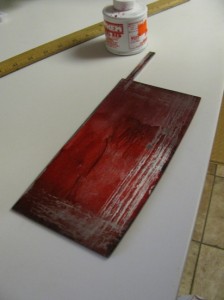 (I realize that this picture looks rather suspicious. That color is from the dye Peter uses to mark the knife, I swear.)

Peter has often joked that Maddie doesn’t look like the most intelligent dog. I always defend her, but when she photographs like this … 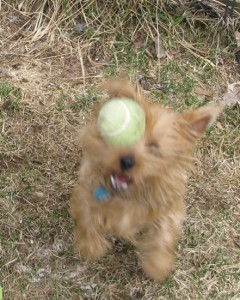 In addition to my recipe, Peter decided to smoke a few cuts of meat. A Maddie-eyed view of the smoker: 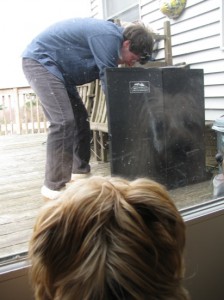 Let’s get to the recipe!

Ingredients:
1 lb mahi mahi (any white fish will do)
2 tbsp pesto
2 tbsp nonfat yogurt
1/4 cup panko breadcrumbs (can find in the Asian food section of the supermarket)
Nuts of choice (I chose hazelnuts and, after some hesitation, macadamia nuts)

Heat oven to 350 degrees F. Place baking sheet in oven to warm. Meanwhile prepare the fish: spread pesto on one half of fish and yogurt on the other (you can also just chose one or the other). Sprinkle with panko. 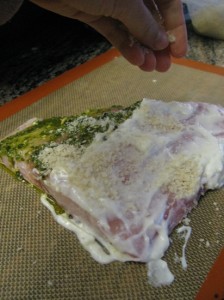 Crush/chop nuts and press into the fish. I originally thought that I wasn’t going to use macadamia nuts because, c’mon, macadamia nut-crusted mahi mahi is SO cliche. Yet, these beauties were just begging to go on the mahi mahi, so I caved and used both hazelnuts and macadamia nuts. 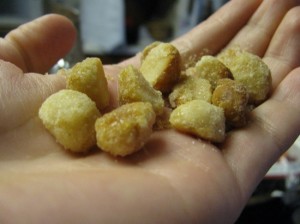 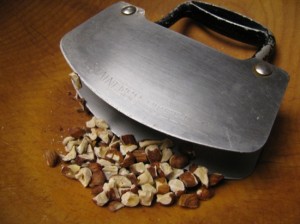 I went with the same four quadrant technique I used for the Secret Apricot Passion Pudding, with pesto-macadamia nut, yogurt-macadamia nut, pesto-hazelnut, and yogurt hazelnut making up the four squares. 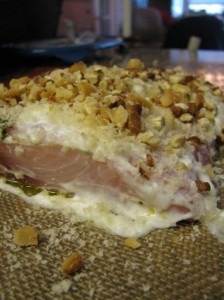 Bake fish for 10 minutes per inch, or until fish flakes with a fork (I usually like my fish a little underdone). Enjoy!

During our grocery shopping trip today, I saw these fun mushrooms and I knew I had to try them: 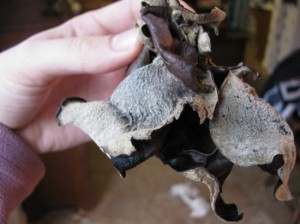 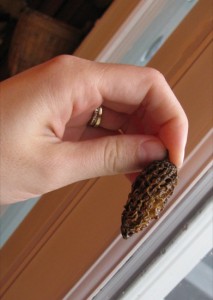 The top one is a wood ear mushroom and the bottom one is a morel (the same as I had at lunch on this day). Morels are pricey ($39.99/lb!), but 6 mushrooms cost about a dollar because they’re so light. These ain’t no white button mushrooms!

I decided to saute them in a little butter to preserve their natural flavor: 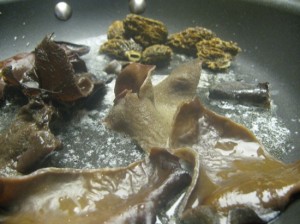 Dinner was served with a side of steamed broccoli topped with a drizzle of balsamic dressing (with my last morel): 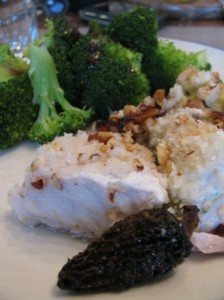 The fish was wonderful, though a little overdone. I think the yogurt-hazelnut combo was the best – the strong nuttiness of the hazelnut and the cool yogurt with the mild mahi mahi was lovely. The macadamias tasted like nothing, sadly. 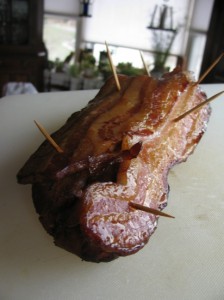 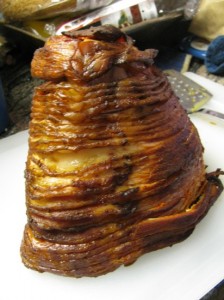 Now thatsa tower a’meat. I tried a little of each, and they were pretty tasty 🙂 Rich and smoky.

After reading both Em‘s and Samantha‘s posts about loving foods now that they previously hated. I started thinking about how tastes change over time and how my own food preferences have changed. Hated shrimp, but now – YUM! Hated ginger, but now – how could I live without ginger?? However, there’s one one food that I’ve always hated and will probably never like … 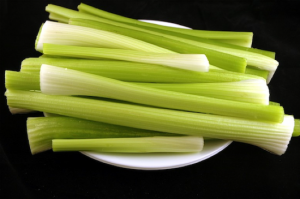 Just looking at those pale green stalks makes me feel ill. Yeep. I’ve tried celery repeatedly over the years, but I think it may be time to give up. Sometimes, there are just foods you don’t like!

But, don’t let my anecdote stop you from trying new foods or old enemies! As you can probably tell, I love to try new foods. I myself am evidence of how tastes change over time – for example, when I was overhauling my diet several years back, I found that the healthier I ate, the more I craved healthier foods. Amazing how our bodies take care of us, isn’t it? 😀

(I’m trying to convince Peter that the more natural PB he eats, the more he’ll prefer natural PB over Skippy chock-full-of-trans-fats-and-HFCS, but as yet my gentle suggestions fall on deaf ears.)

So, I ask you now: Are there any foods that you hated as a child that you love (or still hate!) now? Do you find that the healthier you eat, the more you crave healthy foods? I’d be interested to hear your opinions, because people are so different!

Have a nice evening, everyone! 🙂