Impossible, you say? You can judge for yourself shortly.

As I hinted in my last post, Peter and I made a mysterious side trip in the middle of our Switzerland adventures. When I discovered Paris was only four hours from Zurich by train, I pushed for us to go, particularly as we’d seen all we wanted to see in the area and our lovely hosts would be unexpectedly absent during the last few days of our trip.

“But, wait!” you cry. “How can you possibly see all of Paris during an overnight trip?”

The short answer is: you can’t. However, Peter and I don’t travel much. When we do, we visit family or go scuba diving. We are not returning to Europe any time in the foreseeable future. And this chance to sample Paris was too good to pass up.

So, how did we do it? A breakdown (times are approximate):

2:30 pm on Wednesday, March 20th: Arrive in Paris, 50 minutes late due to “signal problems” on the train. The Swiss train system is extremely efficient and almost always on time. As soon as we passed the border between Switzerland and France (like, literally just over the border), the train slowed to a stop for nearly an hour. I know the timing was just a coincidence, but still.

After leaving the train station, we wandered around the Right Bank on our way to Notre Dame Cathedral, nibbling on crossiants and one of the cured meat and cheese sandwiches that seem to be in every bakery and supermarket.

3:30 pm: Arrive at Notre Dame Cathedral. I eyed the line snaking around the corner, packed with people waiting to climb one of the Cathedral’s towers. I had thought to climb the tower myself, but with just over 24 hours in Paris, doing so was impossible. I didn’t mind. We only wanted a taste of Paris, after all. I guess my reenactment of the iconic scene from the end of The Hunchback of Notre Dame will have to wait until next time. 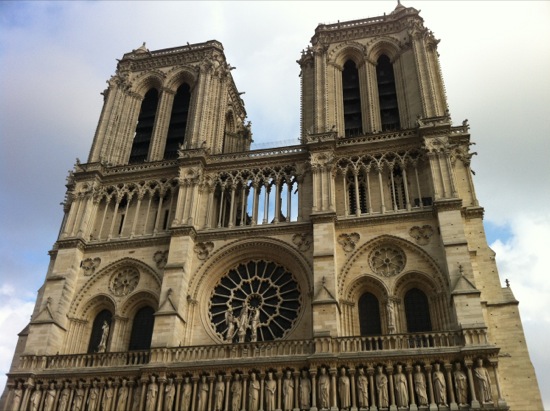 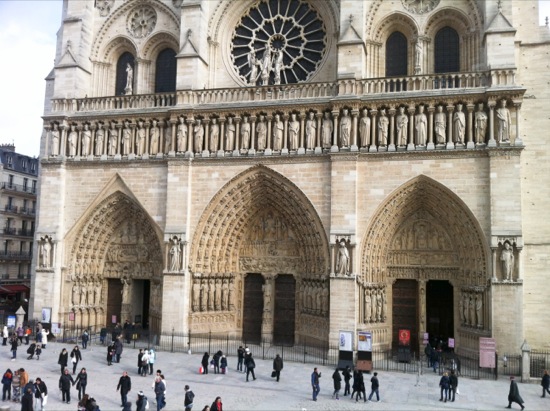 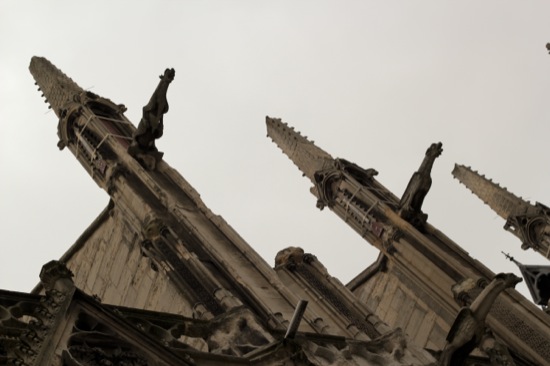 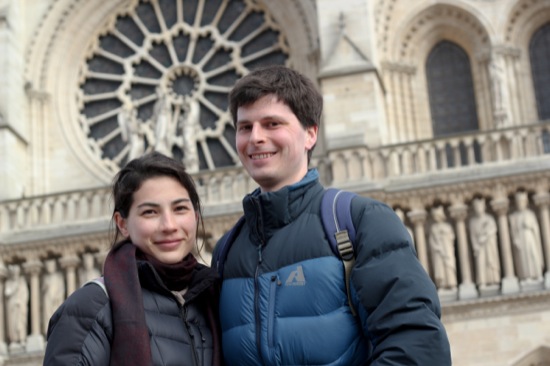 The cathedral itself was more crowded than I expected for a chilly March day. I can’t even imagine how crazy it must get here in the summer. We still had plenty of time to wander around in search of beautiful lighting. 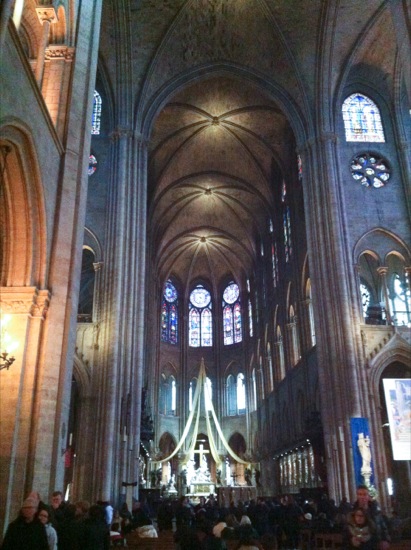 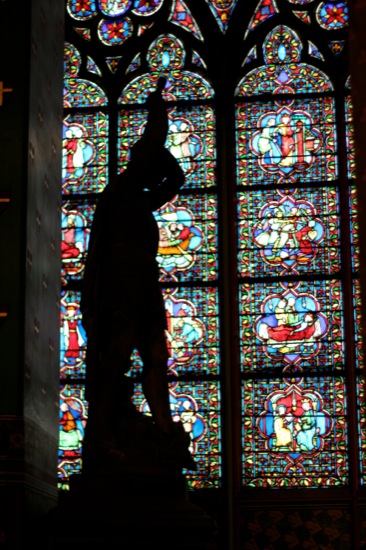 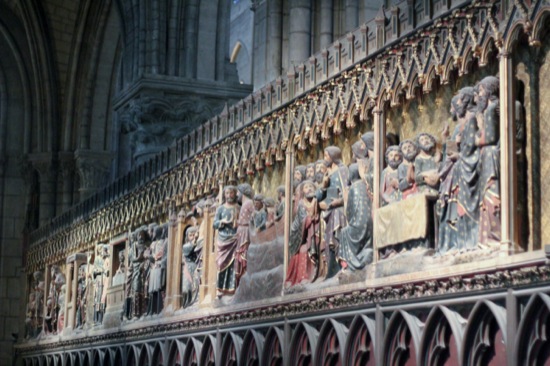 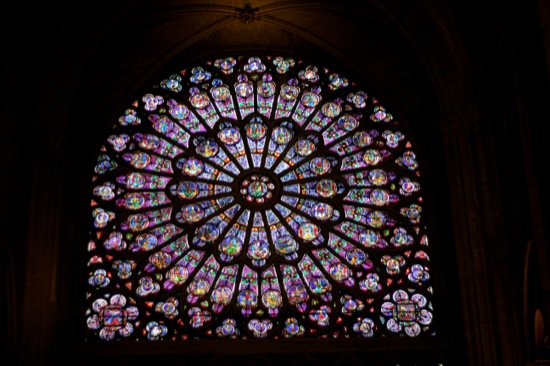 4:15 pm: Left the Cathedral and wandered across the river toward our second destination: Musée national du Moyen Âge, also known as the Cluny Museum. Not typically on tourist lists (particularly tourists only in the city for a day), this museum houses an exhibit I’ve wanted to see in person since I was fourteen years old. 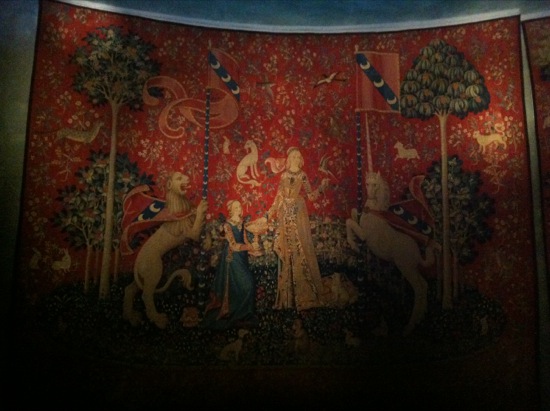 Toward the back of the museum, a circular room houses the famous “The Lady and the Unicorn” tapestries. Five of the tapestries depict the five senses, while the sixth (partly pictured below) is titled “À mon seul désir”, or “My Sole Desire” (French speakers, is this right? As you might guess, I know approximately [6.023 x 10^23/infinity]% of the language. And that’s because I don’t even pronounce “Bonjour!” correctly.) 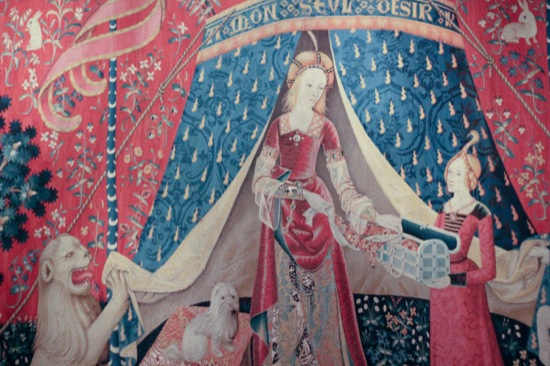 I can’t even tell you how brilliant the colors are in person. Just go.

The Cluny Museum is filled with gorgeous medieval art, but we didn’t have time to see it all. One of the casualties of limited Paris time, I’m afraid.

5:30 pm: Relaxed in the Jardin du Luxembourg, which toward the end of daylight looked especially bewitching.

After resting our feet and shoulders (we carried everything in backpacks), we wandered north through the Latin Quarter and St. Germain Des Pres, pausing to take pictures as we walked. 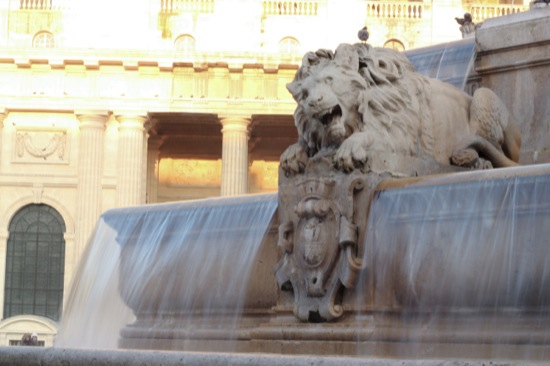 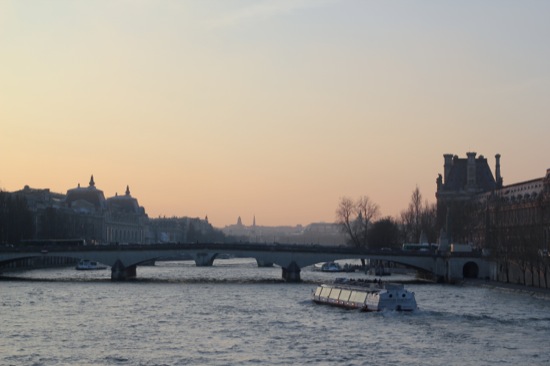 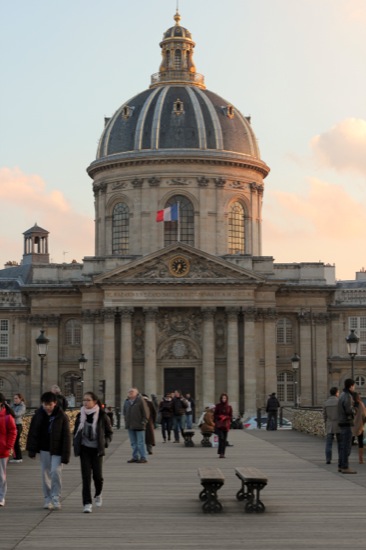 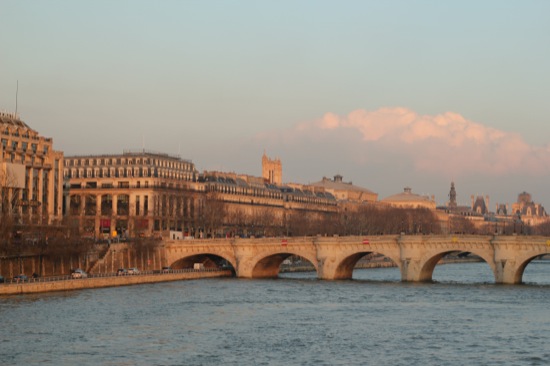 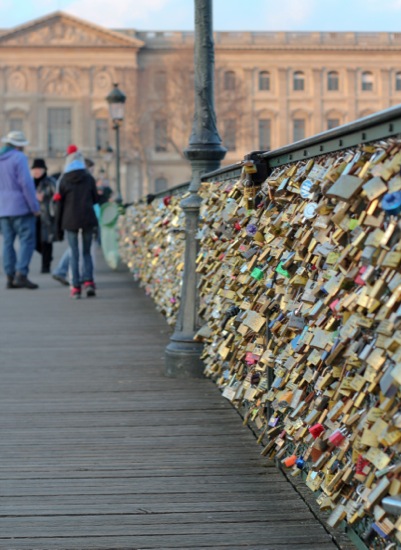 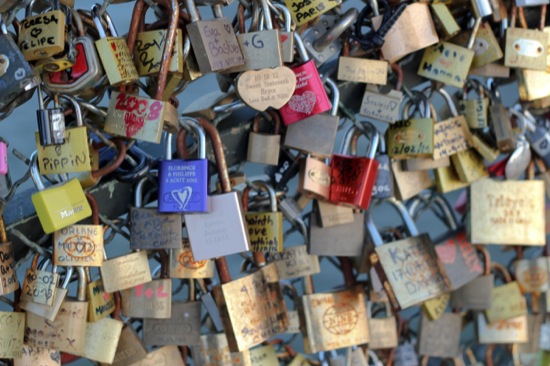 We were in search of paella maker on the Right Bank who ended up not being where we thought. Instead, this lovely woman made us crepes filled with Nutella or bacon. I think you can guess which I chose and which Peter chose. 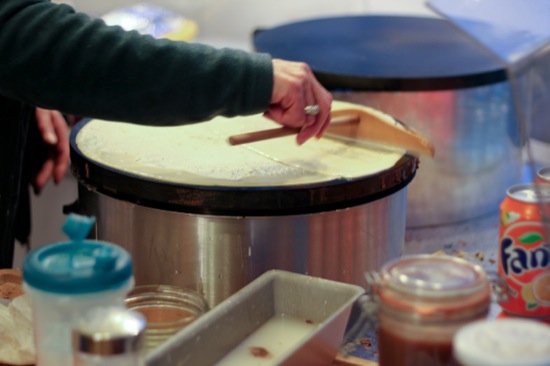 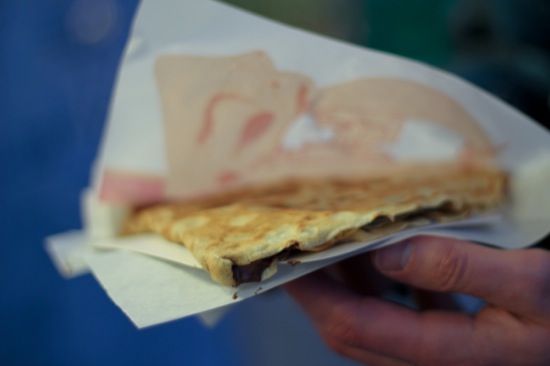 7:30 pm: Foiled in our paella dinner plans, we headed to the Louvre to take advantage of the late opening hours on Wednesdays, only to encounter crowds there, too. There’s not a lot of food immediately around the museum and we were both getting mighty hungry (seriously, we usually eat dinner around 6 pm), so we decided to head to our hotel and see what we could find. We took a few pictures on the way out. 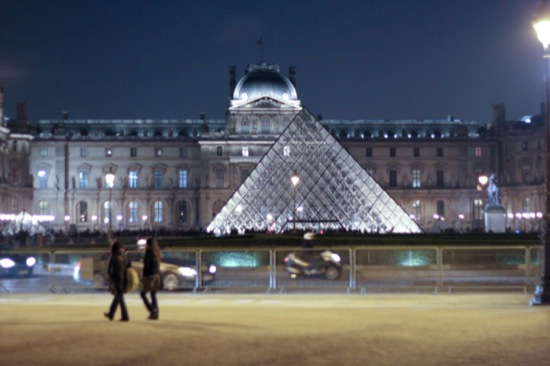 Whenever I ask Peter to take a picture of me, he takes a round dozen or two instead. That’s how I got this stop-motion sequence depicting my attempt to pose casually against the bottom of the Louvre’s pyramid:

A tiny picture of the Eiffel tower at night: 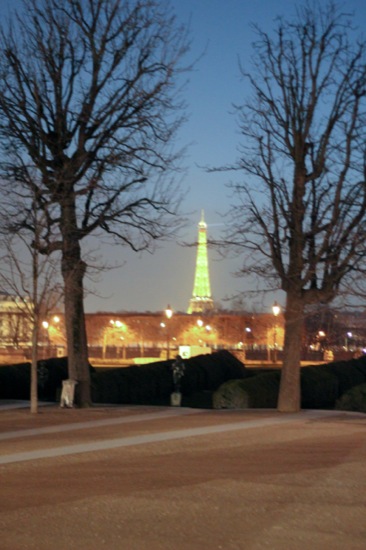 Our hotel was down south, mostly out of the tourist area. Peter found the hotel through his favorite bidding site for which a certain celebrity shills (I won’t name the website, but I will say we went where no man has gone before). At first I bemoaned the distance of the hotel from the city center, but in reality it was perfect. The Paris Metro is incredibly fast and easy to use, and being somewhat out of the tourist area allowed us to enjoy dinner at this gem: 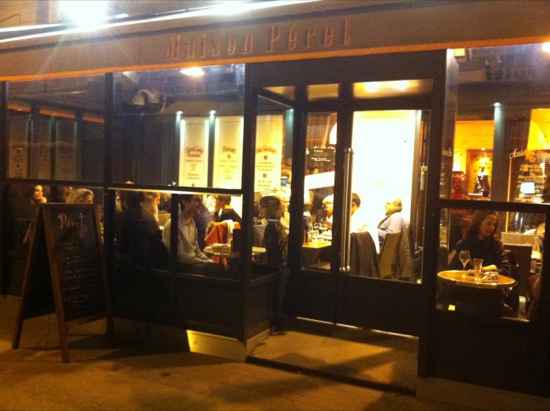 9:00 pm (!): Peter ordered some kind of open-faced sandwich with ham and cheese, while I went for the cheese, meat and pickle platter with bread: 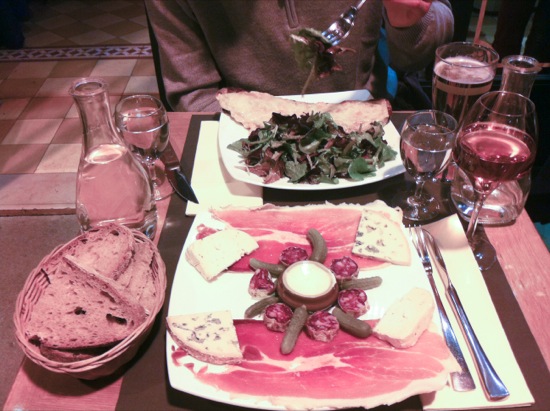 Normally I stay away from meals like this due to the high saturated fat content, among other things, as well as the lack of green (and no, the salt-packed pickles don’t count). However, I will say this meal is a real treat to be savored in a French restaurant. As a very “sometimes” meal, I didn’t mind indulging and didn’t feel a bit of guilt.

10:30 pm: Check into hotel and collapse into bed. Proceed to sleep soundly for eight hours (exhausting day in Paris: best sleep aid ever!).

8:00 am on Thursday, March 21st: Took the Metro to the Tuileries Garden and strolled through them on the way to the Louvre. We spent a couple of hours in the Louvre, which houses, among other works, the Mona Lisa and Venus de Milo. I have a few pictures from the museum, but in truth, it’s best to see the museum in person. I won’t bore you with blurry pictures of great art, but I will say that the museum was much less crowded than I expected, even around the Mona Lisa.

Of course, I would have loved to spend more than a couple of hours in the Louvre, but with time limited and an impatient Peter trailing behind me, I saw a few highlights and called it a morning. Besides, the signs are in French, and we all know how good my French is. Peter rejoiced when he saw the signs had no English translation.

12:30 pm: After our art consumption, we moved on to lunch at a little place a few streets away from the Champs-Élysées:

This restaurant is run by two women in a tiny kitchen which still managed to turn out magnificent food. Peter and I went with a price-fixed three course lunch.

1:30 pm: Walked along the Champs until we got to the Arc de Triomphe. 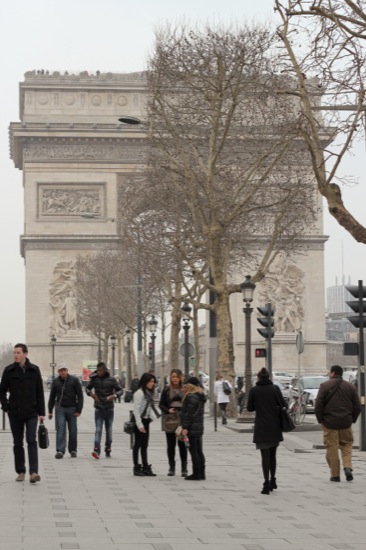 2:00 pm: Headed south until we reached the Trocadéro, which is across the Seine River from the Eiffel Tower and offers excellent views. 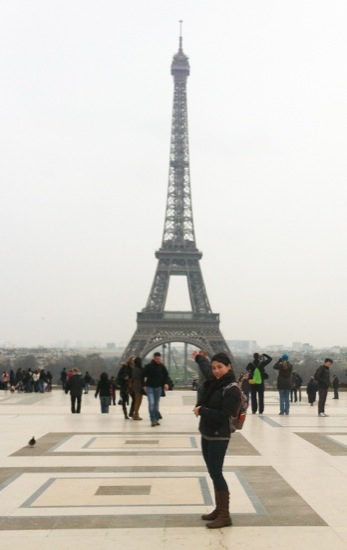 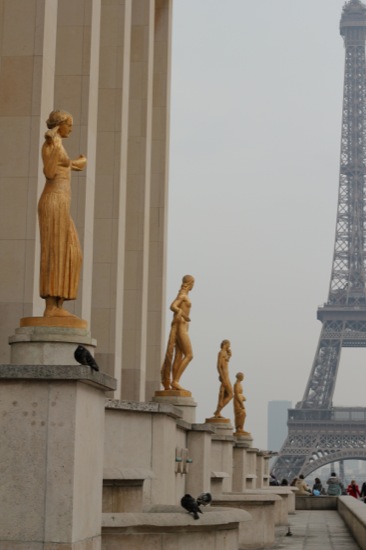 I particularly like the guy craning backward on the left side of the picture below as he struggles to take a picture of his companion’s attempt to “hold” the tower. 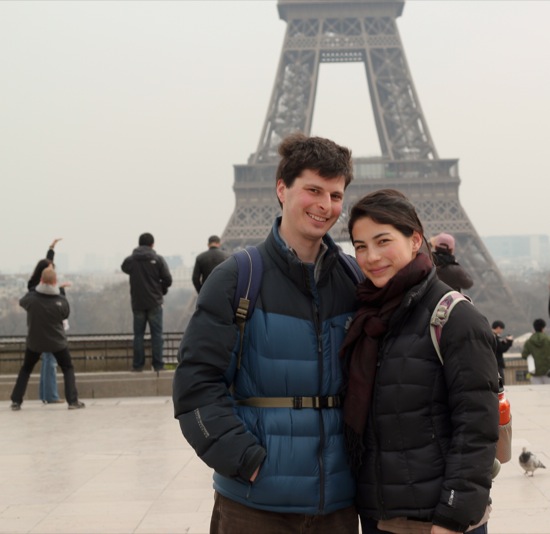 We opted not to go up the tower itself because of, again, limited time. Plus we heard it’s rather overrated. Anyone been up the Tower?

3:00 pm: We still had time before our 4:30 train back to Zurich, so I dragged Peter to La Sainte-Chapelle, only to encounter a huge line of people waiting to get in. Foiled again! One of the benefits of staying in Paris longer than a day is that you can remedy these foiled attempts the next day. Even so, I didn’t mind missing Sainte-Chapelle. Perhaps it will be an incentive to return someday.

4:30 pm: After loading up on French pastries and sandwiches, we embarked on our train ride back to Zurich.

And that, dear reader, is how you see Paris in 26 hours.

Q: Have you been to Paris? What are your favorite sights (or which sites do you most want to see)?