First off, thanks for your suggestions in my last post on how to keep pizza crusts from sticking to the Big Green Egg. We’ll give them a try and report back!

Second off, an update on my weekly planning attempt: If you recall, I had assigned particular meals to particular days of the week. I thought I was being all fancy-schmancy with my cool whiteboard and colored markers. 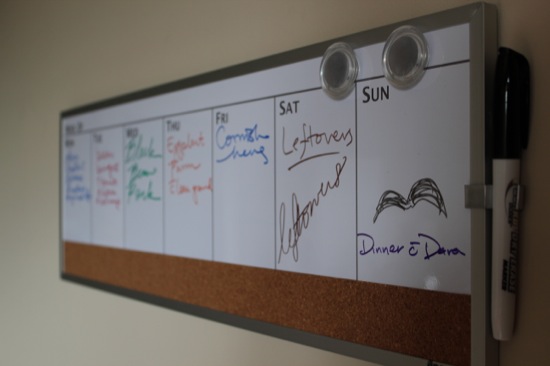 Yesterday (a.k.a. day TWO of the planned week), I deviated from my carefully planned … plan. How?

I prefer to exercise first thing in the morning — it’s cooler, I get it out of the way, all that. Yesterday, I was so busy I didn’t get to it until later on in the afternoon. I usually avoid exercising later in the day because I occasionally have exercise induced nausea when I wait too long (possibly related to dehydration, or an empty stomach, or a not-empty-enough stomach, which I’m sure you’re thrilled to hear about). I was feeling confident yesterday afternoon, so I went ahead and exercised anyway.

Sure enough, I regretted it later.

So, the bean burgers with awesome mayo I had originally planned to have for dinner wouldn’t fly. I had already made dough for homemade buns earlier that day. The only thing that sounded tasty was eggs. Eggs on homemade buns it was! Thanks to Peter for being flexible with dinner, just as I should have been from the beginning. We’ll probably just push the planned meals back by a day, maybe switch some around.

The moral here? I suppose it’s something about being flexible with meals or some such. Whatever. It’s all peachy. 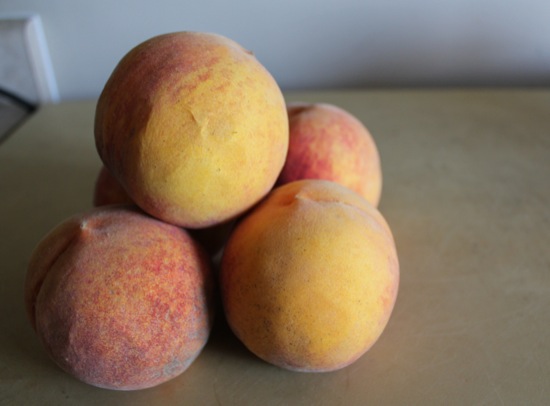 We’ve been on a peach kick lately. There’s an awesome booth at the Urbana Farmer’s Market that sells seconds peaches for $0.75 per pound — 75 cents! We buy them a peck at a time and use them in smoothies and for sweet, sweet eating.

… Ah, I know what you’re thinking. How could two relatively small eaters ever finish a peck of peaches in a single week? The answer is: we don’t.

So here it is, dear reader. The secret to “fresh”, local peaches all year round. Not a new concept, but new to THIH. 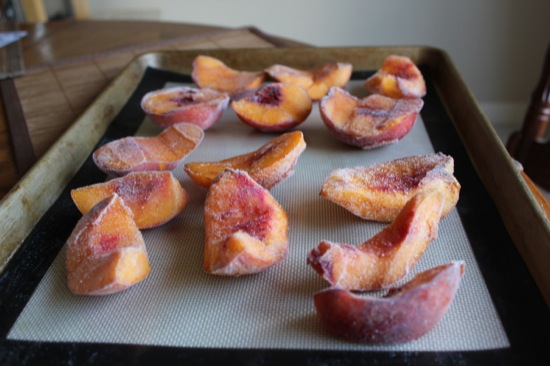 We’ve been freezing peaches non-stop for weeks in preparation for The Great Peach Dearth of Winter 2012-2013. After laying them out in a single later on a sheet pan, I freeze them for several hours. Then, I toss them all in a bag and return them to the freezer.

Whenever we want peaches during the winter, all we have to do is pull out some pieces. Freezing them in a single layer means they won’t get stuck together in a peachy shapeless lump in the bag. We’ll use them in smoothies or in peach desserts.

Still, we have fresh peaches now, so I’d better take advantage of them. I’m thinking the peach cobbler from this post.