Hi all, Jessie’s Subconscious here.  I have been dormant the last few days, clamped down by the stern gaze of Jessie and reveling in the digestive wonder that is Fried Chicken!!!! However, now that Jessie is without internet for five days and didn’t think of changing her password before she left, I can take the opportunity for another appearance!

Nope!  Jessie’s Subconscious wants to get back in touch with its Jewish heritage! 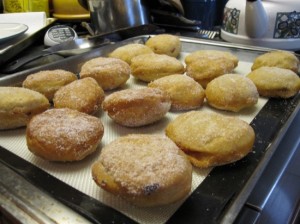 That’s right, Sufganiyot, aka jelly donuts!  I figured I’d get my stomach warmed up for the marathon digestion session that was to follow.  My Sufganiyot are made of a secret blend of dry ingredients, blended with a secret blend of liquid ingredients.  Hint: as with all my fried foods, there is plenty of love.

I had to sandwich the jelly between two layers of dough, because Jessie apparently decided to bring the pastry bag attachments with her to China. 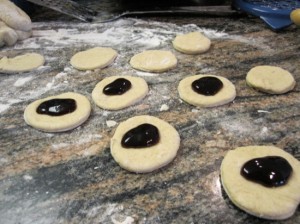 Very tasty indeed.  I think with a pastry bag I could have piped more high fructose laden preserves into the donuts, but they were pretty tasty as is.  A true breakfast of champions.  And I needed it, because dinner was

An impressive culinary creation that I’ve been angling to make for awhile now, but which Jessie has always overruled.  No longer!

What is a bacon wrapped stuffed sausage fatty, you ask?  Let’s view the creation process:

Top the lattice with a dry rub, and follow it up with sausage filling.  I used sweet Italian and flattened the filling first with a rolling pin.  Wait until Jessie tries to make whole wheat biscuits with it next time…. 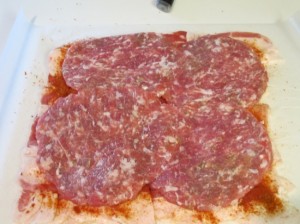 I topped it with tomato sauce, crispy bacon, diced ham steak, cheese, jalapeno, roasted chile flakes, and rolled it up.

Place in your smoker at 225-250 degrees until the center reaches 165 or so.  To generate smoke, I used oak cut offs from my work-in-progress table to house the smoker.

See all those wires around the smoker?  That’s so I can control it anywhere I get internet or phone coverage.  Pretty neat.  Here is a readout on the cooking process:

The program that makes these wonderful logs is PC only.  Some people install Windows on the Mac to take the bar.  Others install it to log their cooks. 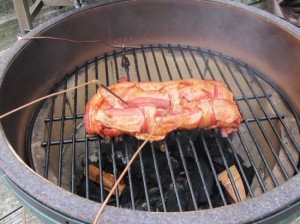 Crisp under the boiler for a minute and you are good to go.  What is the final verdict?  First, I will preface it by saying the prime motivator behind this project was not taste.  That being said, it was actually delicious!  If there were a picture of my face as I took that first bite, you would see an expression of rapture unlike no other.  That is assuming that Subconscii have faces.

With such a wonderful meal, it is only a matter of time until I attempt a turducken.  Have you ever had turducken?  What is the most exotic meat dish you’ve encountered?

Until next time, this is Jessie’s Subconscious bidding you tinkerty tonk!