I said this quote to myself repeatedly yesterday as we waited at the airport for our flight to take off (3 hours), sat in the plane waiting for them to load luggage, de-ice, and take off (1 hour), sat in the airport of our connecting city waiting for the next, delayed plane (4.5 hours), and waited for luggage before driving home, sans two of our bags (1.5 hours). This wonderful journey-not-destination also includes the 5.5 hours spent in the air. Grand total? 15.5 hours from arrival at the first airport to home.

At the Salt Lake City airport, I was anticipating a wonky eating schedule due to travel, time zone changes, and daylight savings, so I decided to go light with fruit, yogurt, and a little granola for “lunch” (brunch? blinner? bnack?). 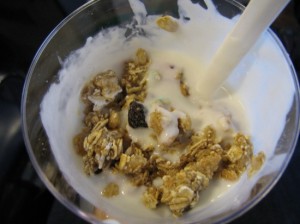 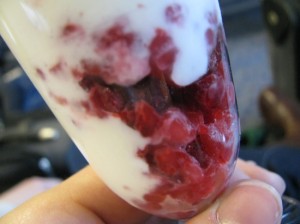 Our first flight was delayed by hours because of supposed bad weather (?) in Chicago, our connecting city. The airline kept pushing back the takeoff time until I stopped believing them. When we finally got on the plane, we were treated to a confined space for an hour while they took care of some “last minute” details.

Snow on the window: 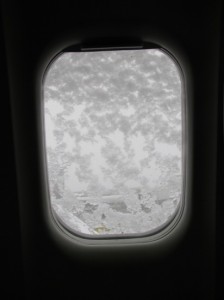 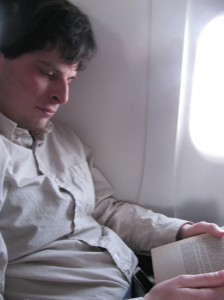 Compare the departure time on the ticket to the time on Peter’s phone right before takeoff: 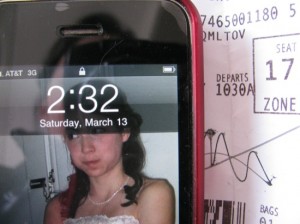 At least I had plenty of time to study for Monday morning’s Medical Nutrition Therapy exam:

Needless to say, we missed our connection in Chicago. As soon as we knew we were going to miss the connection, we asked a gate agent in Salt Lake to book us on the next flight from Chicago to Hartford (the ONLY flight on the same day, in fact). He was noncommittal about whether or not he had been able to book us. Who says flyin’ ain’t fun?

When we arrived in Chicago, we asked the airline agent for confirmation that we were on the next flight and were met with only rudeness. Now, we are calm and respectful people who are very polite, so I was surprised and disappointed with this airline. Luckily, we were flying a different airline for the second half of the voyage, so we went to one of their help desks and were immediately confirmed for the flight to Hartford. Thank you, United! You saved our Saturday AND Sunday! 🙂

(I’m not saying which airline we flew for the first half of the trip from Salt Lake, but if you look at the pictures in this post you should be able to guess.)

Our second flight was delayed for hours, too, so we had plenty of time for dinner. As we wouldn’t be getting in until about 3 am, I was looking for something more substantial than salad. We stopped into the airport’s Berghoff restaurant and scoped out their take-away. Doesn’t this veggie pizza they had set out for an example look good?

At least it tasted pretty good. The pizza was not like deep-dish Chicago pizza at all – instead the crust was thin and crispy (which I like).

Yesterday was not a good day for the Chicago airport:

I usually like to walk around airports for some exercise when traveling (I’ve been known to pace back and forth in the Bradley airport, drawing more than a few odd glances). However, I stayed put for the most part this time, as I didn’t want to abandon my travel companions. Peter and I did take a walk at one point – if you’ve ever been to the Chicago airport, you’ll probably recognize this underground moving walkway with an overhead mirror: 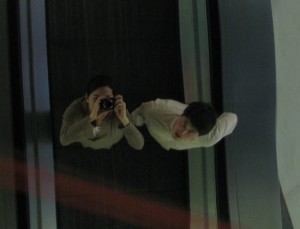 I also worked a little on a research paper. It’s amazing how much you can get done when you have nothing else to do. 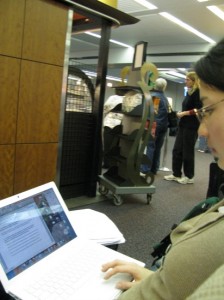 We rolled into Hartford shortly before 3 am on Sunday. Yes, that’s TODAY. When going to pick up our bags, we discovered that are skis were still somewhere in Chicago. Oh well, at least they didn’t have my Biscoff.

I woke up around 11 am and immediately consumed my “Jessie Revitalization Project” oatmeal.

Oatmeal was much needed after a long day and night.

Not much else happened during the day, except for picking up the doggles!! Imagine the Chariots of Fire theme song as Maddie and I ran toward one another, except triple the song’s speed because that puppy is pretty fast.

Otherwise, I’ve been studying up a storm for tomorrow’s MNT test. Nice “Welcome Back” after Spring Break, huh? 😉

The beginning of this upcoming week is going to be pretty crazy (another test, teaching, community, clinical, work with the dietitian), so posting might be a little spotty. I’ll try my best, but homework and work come first.

Have a wonderful Sunday evening! 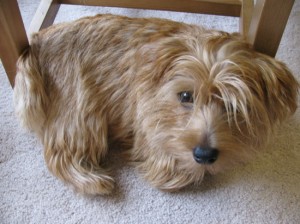 Q: C’mon, I know you have at least one: what’s your crazy travel story?!

P.S. Some of your comments have been ending up in my spam box if you have special characters like ” and ( ) in your name. I don’t want to miss any of your wonderful comments, so if you could keep your name special character-free, I would be so happy!