This past weekend, thanks to a tip from my best bud Amy (hi!), Peter and I drove to Peoria, IL to watch Jeff Dunham perform at the Peoria Civic Center. We’re fans of his ventriloquist comedy routines on YouTube, so we couldn’t pass it up.

I’m not sure what I expected when I bought the tickets, but it was some vague combination of the following:

(a) We live in the middle of Nowhere, IL, and I didn’t think Peoria was a happenin’ place (sorry, Peorians!).
(b) We were going to see a ventriloquist, for goodness’ sakes. How many people could be interested in that?
(c) The show was at 8 pm. Surely people don’t want to go see a puppet show at that late hour? (Oh, Jessie, how naive you are.)

What I didn’t expect was this: 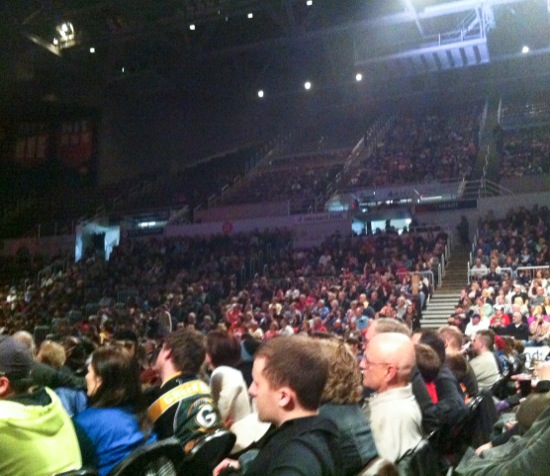 Imagine this packed audience circling an area the size of a hockey rink (which, in fact, was where we were). I can’t remember the last time I saw so many people in one place.  I definitely underestimated the number of Jeff Dunham fans in East-Central Illinois who are willing to drive long distances.

Due to waiting until the last minute (i.e. we bought the tickets 1.5 weeks before the show), we managed to score middle section seats near the front after the Center opened up reserved seats. Nice! (That’s right, kids: procrastination pays off.) 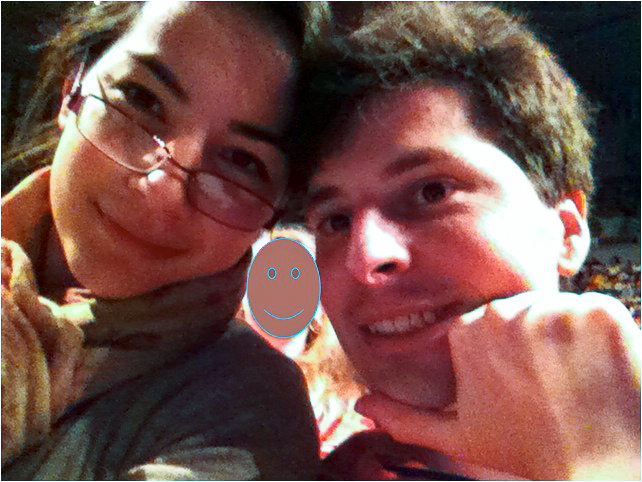 I’m not sure where Peter is looking because it ain’t at the camera. Also, I added that weird smiley-face between our heads because I somehow managed to capture a picture of the woman behind us looking at the camera with murder in her eyes. I’m not sure which is better in the long run.

I didn’t get any pictures of the show because photography was prohibited, but I’ll say we had a blast.  If you get a chance to watch this ventriloquist in action, I highly recommend it. 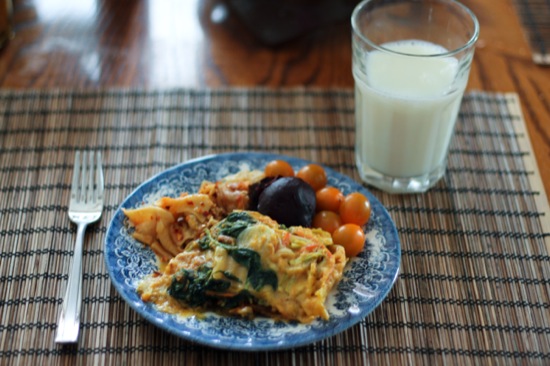 Ever since I mentioned the pumpkin veggie lasagna I made for a vegan dinner party last week, I’ve had multiple requests for the recipe.  I almost decided not to post it because I wanted to keep it secret (it’s THAT good). But, how fair is that? Whether you’re a longtime reader or just passing though, you’ve contributed to this THIH community – and I thank you with all my heart. 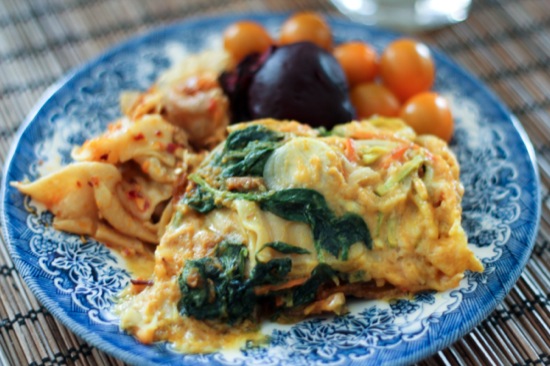 Enough mush – more lasagna! I’ve made this recipe many, many times, but never a vegan version until last week.  To make it vegan, I used vegan cheese, soy milk, and olive oil in place of the butter. I also used frozen pureed garlic for the first time. Not only did it add more garlic flavor, it was easy to use.

Preheat oven to 375 degrees F. Prepare lasagna noodles according to package directions. Heat olive oil in large skillet over medium heat. Add half of the garlic, leafy greens, and shredded vegetables. Cook until tender, about 10 minutes. Set aside.

Meanwhile, melt butter in small saucepan over medium-low heat and add flour. Whisk into a paste, then slowly add milk while continuing to stir. When bubbly, add the pumpkin, cinnamon, and rest of the garlic. The sauce will thicken considerably.

Top with a layer of the remaining noodles and the rest of the cheese. Bake for 40-45 minutes, or until browned on top and cooked through. Remove from oven and let rest for 5-10 minutes, then serve.

Q: How was your weekend? What’s your favorite kind of lasagna?