Thinking about doing baby-led weaning with your infant? Read on for essential tips and tricks! 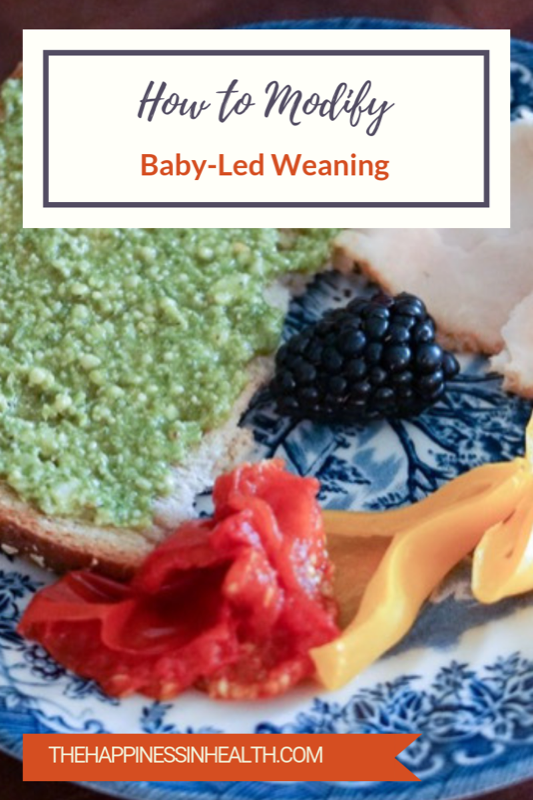 So goes the bittersweet experience of watching your child grow.

When our firstborn, Toddler J, was 7 months old, I reflected on introducing a brand-new person to the joys and challenges of eating solid foods for the first time. I diligently followed the standard advice to start with thin purees of cereals, fruits and veggies, moving on to thicker and chunkier foods as J grew. By the time he was 9 or 10 months old, J ate the same foods we ate, cut into appropriately-sized pieces. 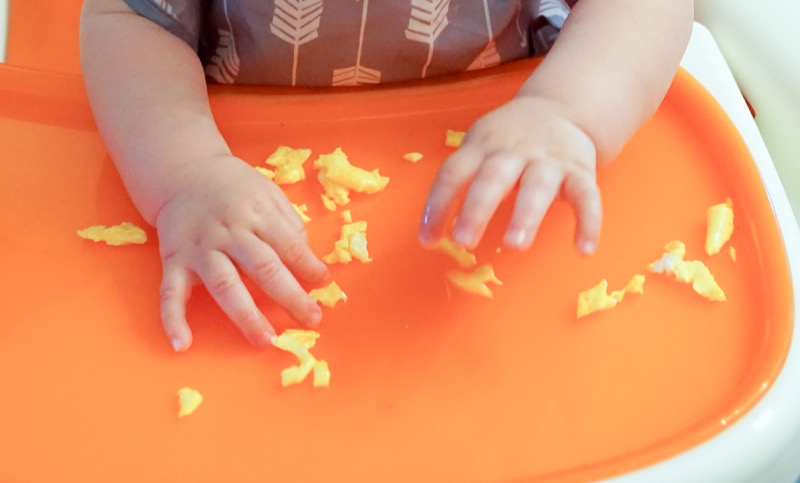 When Baby E was born, I assumed I would follow the same feeding method. Why mess with the tried-and-true?

Anyone who knows me, knows I’m not a tried-and-true sort of person. Vaguely-referenced world travels, anyone? 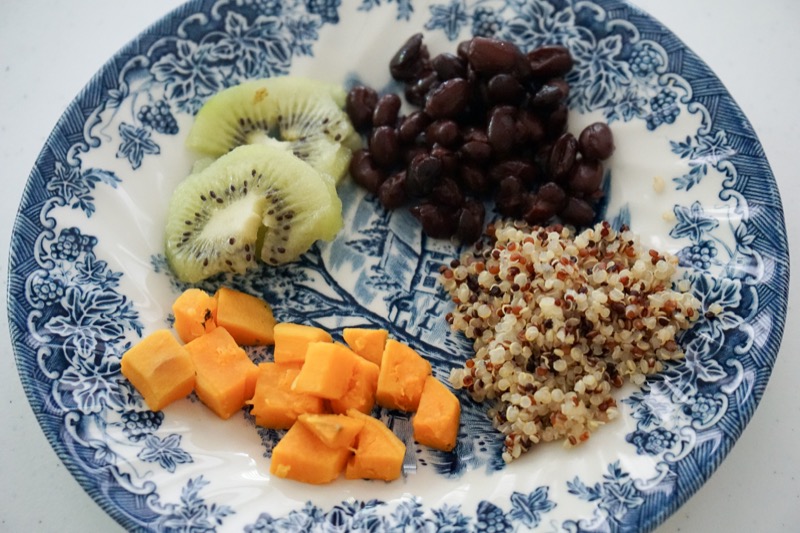 When Baby E was a few months old, I remembered a post I’d read on dietitian Gina’s awesome blog, The Candid RD, about her experience with baby-led weaning. I’d kept it in the back of my mind, where it resurfaced several years later.

What is baby-led weaning? 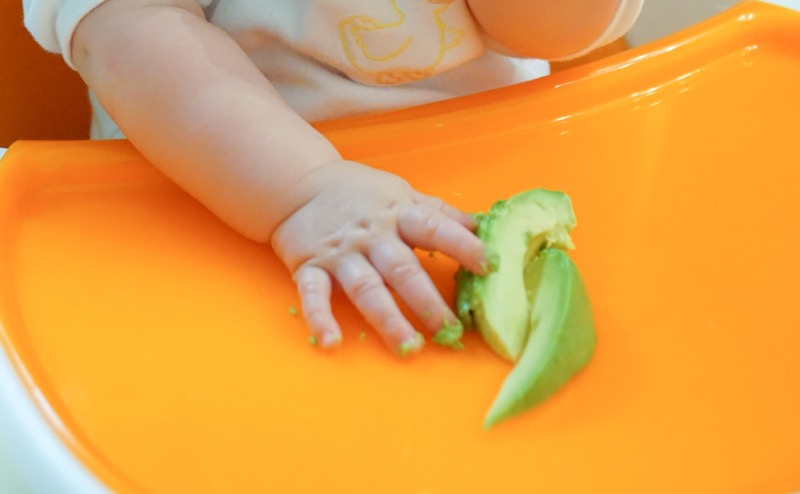 Baby-led weaning (BLW) is the practice of giving whole solid foods to babies as their first foods rather than the more traditional spoon-fed pureed foods. By exploring, gumming and biting whole foods, babies can work on their fine motor skills, as well as practice chewing and gain independence. Infants have complete control over the foods they taste and eat, choosing from among the foods offered on their trays or plates. In reality, BLW should be called something like baby-led feeding, since breastmilk or formula is still the main source of nutrition for babies before one year old. Yet the name has stuck.

Why I decided to do baby-led weaning this time around 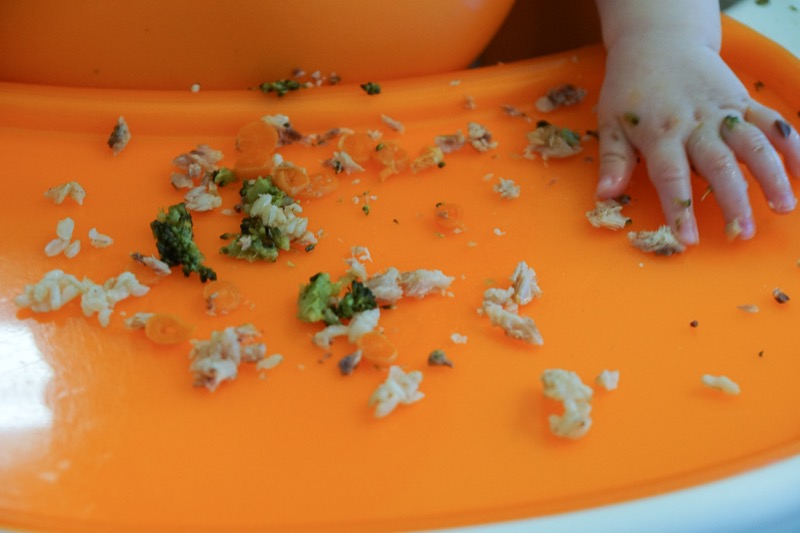 The pros of BLW include:

*Introducing babies to self-feeding many textures may encourage fine-motor development while reducing picky eating as a toddler.
*Eating the same food as the rest of the family may spur babies to try the foods on their trays.
*Self-feeding promotes independence.
*Practicing self-regulation of food intake may help prevent obesity later in life.
*Less time is spent preparing purees and spoon-feeding.

(I’ll admit, with a busy toddler in the house, the last pro was mighty appealing.)

Cons of BLW include:

*Fortified baby cereals–a common first puree–is rich in iron.
*It’s messy. (Oh, is it messy.)
*A greater risk of choking may occur (although the jury’s still out on this one).

The last con often stops parents from trying BLW, and I’ll say that it gave me pause. Refreshing my knowledge of infant CPR and what to do if choking occurs (good to know whatever your feeding approach) helped allay my fears.

Ultimately, I decided to do BLW this time around because I felt the pros outweighed the cons. In addition, the promise of discouraging picky eating was a huge pro. (More on that in a future post).

Oh, and I still don’t post pictures of my kids, therefore what follows will be several pictures of baby hands clutching at unappetizing-lumps of food.

So, sorry about that.

(As a side note, that brown chunk at the top of the above picture is a meat torpedo hanging from Baby E’s mouth. And, yes, she’s reaching for another torpedo. Pacing herself while eating is not her strong suit.)

Why I decided to modify the usual BLW approach

When Baby E was around four months old, we learned we had a problem. Baby E was gaining weight slowly–way too slowly for comfort. She was edging into failure to thrive territory, which is a scary place to be teetering on the edge of for any parent. On the recommendation of her pediatrician, I tried supplementing her with breastmilk and formula in bottles, cups, oral syringes and more. She spat out every sip–if she sipped at all.

Unbowed, I nursed her every hour. I did weighted feeds and had my milk tested. Despite doing everything, there was nothing I could do to bring her weight up. Any parent who has been in that situation recognizes the feelings of stress, frustration and fear that flooded us.

(The story behind why Baby E was gaining so slowly is a long one. Perhaps I’ll write a post about it.)

I’d planned to introduce solids around six months, as I did with Toddler J. As a pediatrician-recommended last-ditch effort to encourage weight gain before moving to more testing, I introduced Baby E to solids around five months. Straight BLW went out the window; I did what I could to encourage Baby E to eat, including spoon-feeding her. Over the next several months, I gave her a combination of whole solid foods and purees, which ironically ended up being more work that either straight purees or straight BLW. 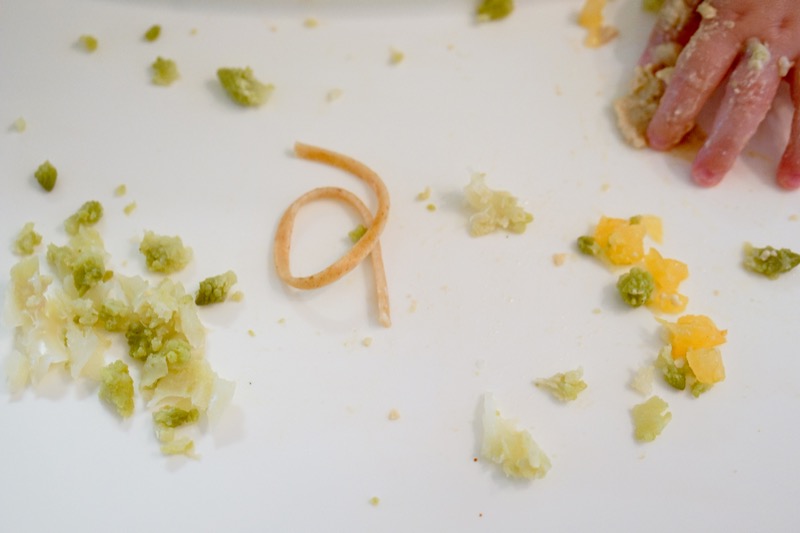 It worked. Baby E is thriving and gaining like a champ. And, we can finally breathe again. This experience confirmed what I’ve always known: Life does not go the way you expect. I’m a registered dietitian, and I had planned to start solids at the recommended six months and do straight BLW. I did neither. And, that’s okay.

Another reason many parents have given me for why they don’t want to try straight BLW is because of the fear of choking. Totally understandable. A modified approach can allay some of those fears.

How to modify BLW

Whatever your reason for modifying BLW, the method is simple: Offer your child whole, soft foods to explore, then offer pureed or mashed versions of the same foods. Foods that are already “pureed” such as yogurt, hummus or applesauce can be dolloped directly on your child’s tray or spoon-fed, as desired. Always supervise your baby while she or he is eating.

The pictures in this post give examples of how the food looks. When I began solids, I steamed or roasted whole green beans, apple slices, large pieces of broccoli and more, then allowed Baby E to mush the foods between her fingers, put some to her mouth, even taste a little. After about twenty minutes, I spoon-fed her mashed versions of the same foods. Because I was encouraging weight gain, I mashed Baby E’s foods with oil, avocado, butter, sour cream and other calorie-dense additions. I started solids before the recommended six months, so I gave mashed foods more often than whole foods for the first month. 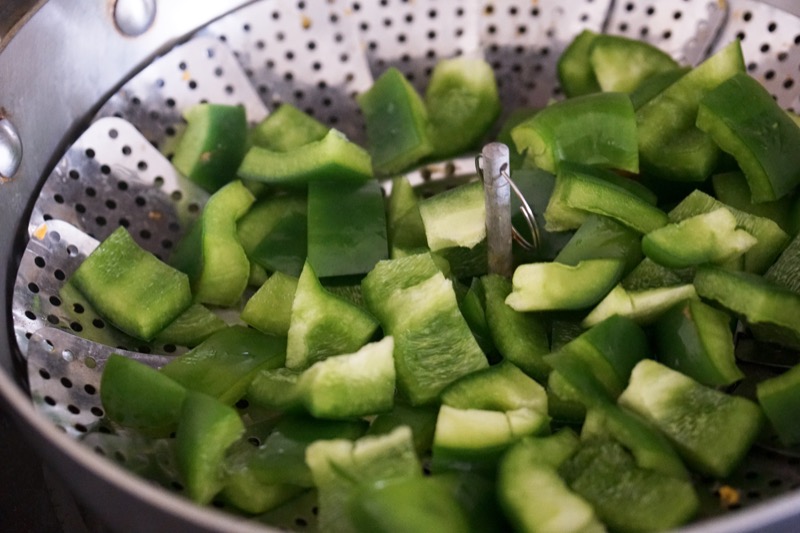 Once Baby E was about 7 months and had a good grasp (ha!) on how to self-feed, including chewing and swallowing, I began giving her whole foods cut into pieces that were pea-sized or smaller. Foods like blueberries and grapes were cut in halves or fourths (still are). She really mastered the pincer grasp during this time. Now that she’s 10 months old, she gobbles down noodles, whole strawberries, slices of bread and more with ease. She gagged a few times early on, but since that first month of solids, she’s had no problem with foods.

What I’ve been feeding Baby E 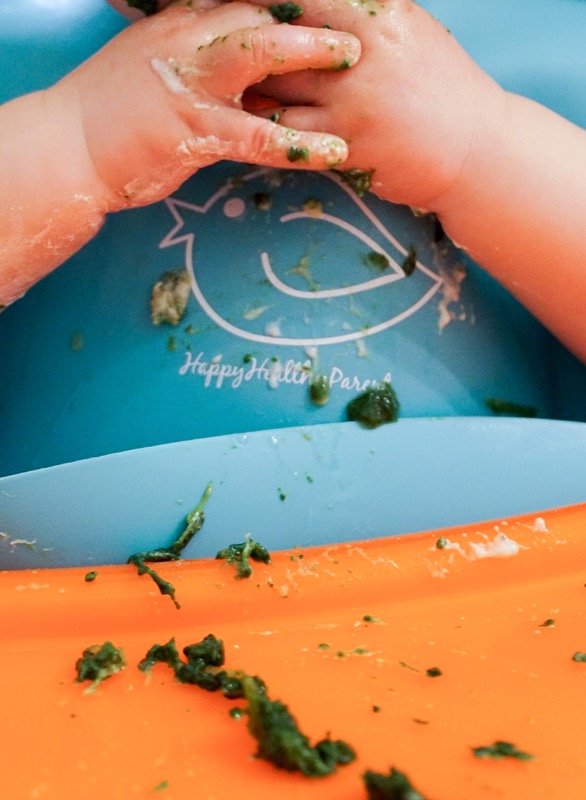 I started with the green vegetables–broccoli, green pepper, green beans, pureed kale and spinach–and worked my way up to the sweeter vegetables. She spits out baby cereals (go figure), so I give her cooked oats, rice, farro, quinoa and other grains instead, as well as iron-rich foods like beef coupled with foods high in vitamin C to encourage iron absorption.

For thicker “purees” like hummus or yogurt, I load up a spoon and either hand it to her or place it on her tray for her to pick up (see picture below). While some proponents of BLW suggest allowing your baby to scoop foods themselves, I want Baby E to have every opportunity to get the calories she needs. 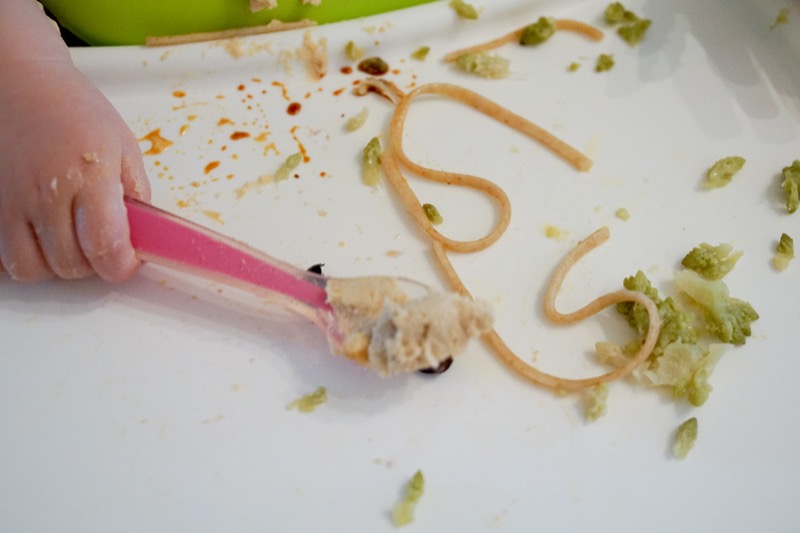 In the beginning while I was trying to figure out this method, I sometimes made Baby E a separate meal from the rest of the family–Toddler J was jealous of her peanut butter toast–but by eight months, she ate what we eat. In retrospect, the time-consuming period of modified BLW only lasted a couple of months. Now, mealtimes are easier and more fun.

*Be prepared for mess. If you don’t have a helpful furry Roomba (thanks, Maddie!), put a waterproof mat under your baby’s chair for easy clean-up or keep a broom and/or mop close by. Like, in your hand.
*Make foods easier to hold early on. Slippery foods, like banana or avocado, can be difficult for little hands to pick up. You can leave the peel on a banana to make it easier to handle. Just expose enough food for your baby to eat. I’ve also heard of cutting food with a crinkle cutter or dusting it in powdered cereal. I’ve not tried either. YMMV.
*Make food oblong. Similar to the prior tip, making foods “long” (see: ground beef torpedoes above) give babies a way to hold food and gnaw one end.
*Be flexible. You may not follow all the BLW “rules” exactly (see: purees), and that’s okay!
*Brush up on infant CPR and what to do when someone is choking. This tip is good for everyone, regardless of how you’re feeding your baby.
*Trust your instincts. Does your baby seem to have trouble with one food more than another? It’s totally fine to back off on that food or offer it mashed. You know your baby best.

Would I try BLW again?

In a heartbeat. Without the weight-gain issue, I would do a straight BLW approach, especially as babies have plenty of practice with “purees” while eating foods like yogurt or hummus, anyway. Overall, I’m happy with how a modified BLW approach has gone. I’ll be sure to update over time. And, as always, I’m happy to answer any questions you have.

[bctt tweet=”Looking to try #babyledweaning? This guide will give you the tips and tricks you need!” username=”JessieHealthRD”]

Baby-Led Weaning Tips
BLW by The CandidRD
AAP: Infant food and feeding
Pros and cons of BLW
A fascinating look at the history of feeding babies

P.P.S. Unlike with Toddler J, Peter did not try to give Baby E fried chicken as her first food. Perhaps he knows better. Or perhaps the fact that I poked him repeatedly with a chopstick until he dropped the crispy drumstick he was holding in front of her grasping hand had something to do with it.