This post is a continuation of the Monday Munchies series where I show everything I eat over the course of single day. These eats took place last Saturday (two days ago), a day that will go down as the most “sometimes” food-filled day in recent gustatory history.

Warning: What you see here may shock you. This dietitian wishes to assure the dear reader that she will not judge those who wish to avert their eyes at the spectacle below, and that, in fact, this day-of-eats does not mean she is a “bad person” or “dietitian on her day off”, but a regular person who will occasionally indulge in fast food and/or pastries without guilt (which the dear reader may do as well, if he or she wishes). 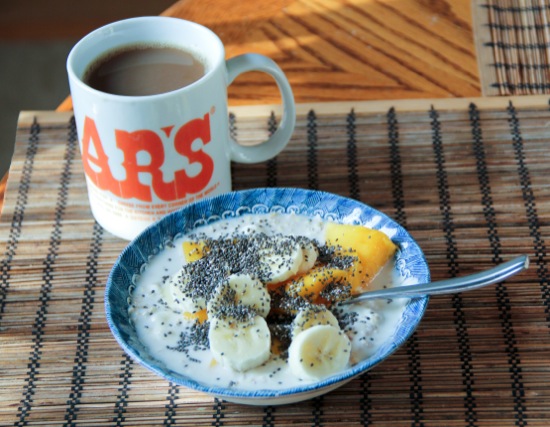 Bircher muesli with 1/2 sliced banana and 1/2 chopped mango, topped with chia seeds. Gobbled with a mug of coffee.

Peter and I spent a good chunk of the day running errands. The first stop was the most important: Curtis Orchard (as featured in this post) to pick up some apple cider doughnuts. 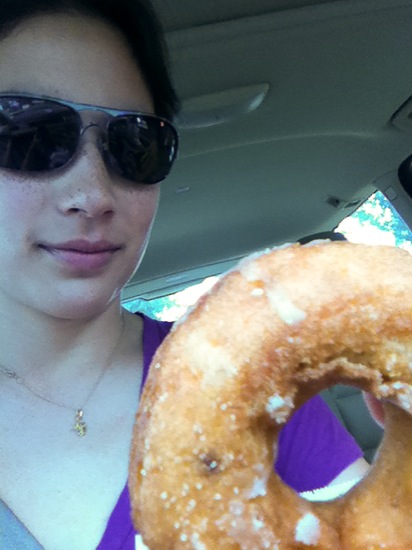 You can’t drive more than a few miles in Connecticut before you hit a farm stand selling apple cider doughnuts. Perhaps from a sense of deprivation, we bought one each of the glazed and cinnamon-sugar covered doughnuts. I tried a bite of each.

Reader, they were bad. I have high standards for apple cider doughnuts, and I’m afraid these didn’t come close to eliciting a “wow, these are danged good doughnuts!”.

So, how about some fast food? After a long morning spent gathering essentials (including a tense few minutes during which Peter thought deeply about how many bags of dried shrimp he could buy from the Asian grocery without drawing strange looks), we were a mighty distance from home and rather famished. When this happens, I’ll put in a plug for a sandwich shop, like a Panera or something. However, Peter’s tastes run a little … faster.

Thus, that’s how we ended up at Steak ‘n’ Shake.

To be fair, I didn’t put up much of a fight. We’ve been here once before, and I discovered I adore their peanut butter milkshakes. You know what’s even better? You can order a child’s size.

As for the main meal, well. I learned my lesson several months ago when Peter and I went to a Waffle House at his request. I wasn’t wild about the idea of waffles OR plastic-y-looking hamburgers at lunch, so I looked the waitress straight in the eye and said “I’d like the Avondale salad, please.”

The waitress looked at me like I’d pulled a club from my purse and offered to “rearrange” the waffle irons. I had to point to the menu to prove there were indeed salads on the menu. More than one, in fact. Our waitress (who was also preparing our food) said, “Wow, I don’t think anyone’s ordered one of those before. Let me just ask the manager how to make one.”

She disappeared into the back, from which I heard a long, drawn-out laugh. I think that’s around the time I regretted ordering salad at a waffle restaurant.

The Avondale salad did not disappoint. I’ve never seen such pale lettuce, nor such perfect miniature cubes of ham and cheese. It takes effort to do that, people.

Thus, at Steak ‘n’ Shake, I went straight for the steak burger with guacamole. Served with fries and the most neon orange cheese I’ve had the privilege of tasting (and I went to public school). 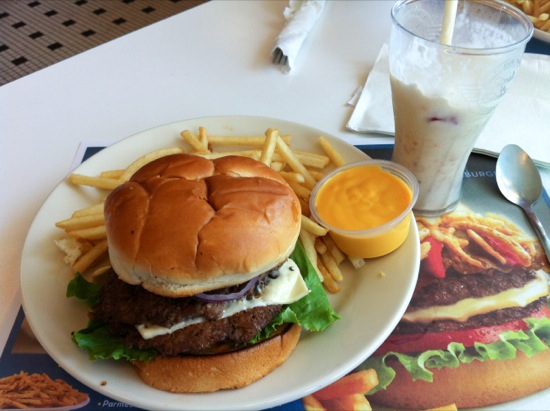 You know what? This burger was delicious. I’m going to try guacamole on our own burgers. Bean burgers with guacamole, perhaps?

Lunch sat in my stomach with the weight of ten Maddies, and even at 7:30 pm I was still full. And not pleasantly so. Our fast food diversion was enjoyable, but it will be a long time before I set foot in another burger joint.

To stave off night time hunger, I mixed together leftover quinoa and beans, a tomato from our garden, corn, and fresh mint. 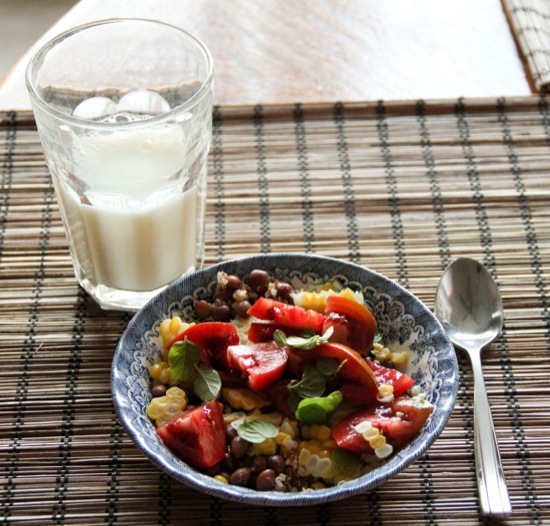 Served with milk, this dinner was just what I needed. 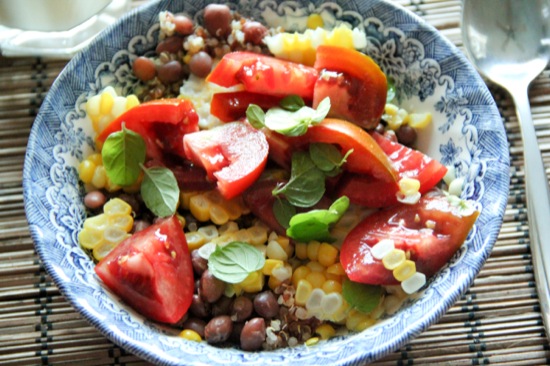 Earlier in the day, when I was still hungry, I bought a couple of my favorite pastries from the Asian grocery: dan tat and coconut pastries (lesson here? don’t shop hungry). I had a bite of each for dessert.

Not bad!  I’d like to try making my own coconut pastries. After I digest lunch, of course.

Q: How was your weekend? What was the last fast food meal you had?