This post is a continuation of the Monday Munchies series where I show everything I eat over the course of single day. These eats took place last Friday and reveal a little secret about me *gasp!*

First, Maddie wanted to thank you for your wonderful reactions to Dog Week.

On to the day’s eats! 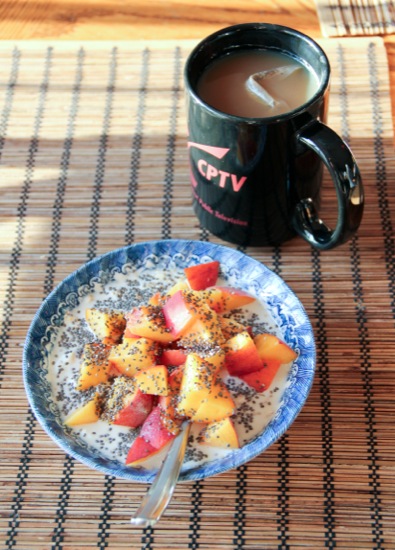 Bircher muesli with a yellow peach and chia seeds. Served with hot Yorkshire Gold and skim milk. I’ve been choosing tea over coffee lately because I’ve noticed I don’t have that “fuzzy head” feeling in the morning when I skip coffee for a while. Coffee never helps me feel awake, but boy, can I tell when it’s gone. I’m going to lay off the coffee for a while and see if this awesome, non-fuzzy trend continues.

(By the way, remember this vintage THIH post? I got into the habit of drinking coffee to survive my daily 1.5 hour commute. Haven’t done that for years, so why drink coffee when I don’t even want it?) 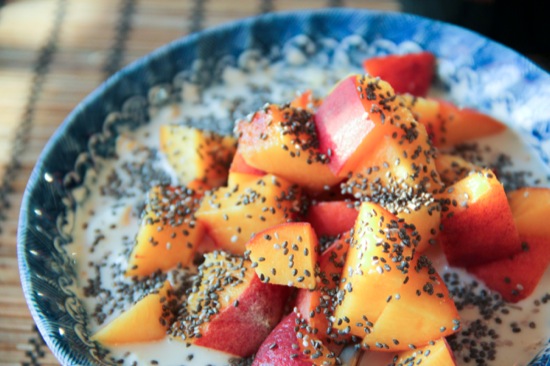 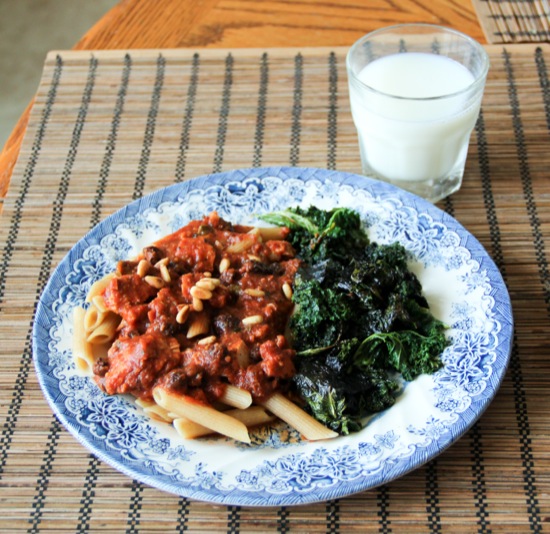 An incredible spicy whole grain pasta (stop by on Wednesday for the recipe!) and 1/2 head of kale sauteed with olive oil and drizzled with a little maple syrup. Served with skim milk.

Isn’t it amazing how much leafy greens cook down? Even though I’ve been a dietitian for a while, I still get a kick out of how many greens I can fit in a single meal. If you’re having trouble chewing that many greens, give ’em a quick saute. So easy. 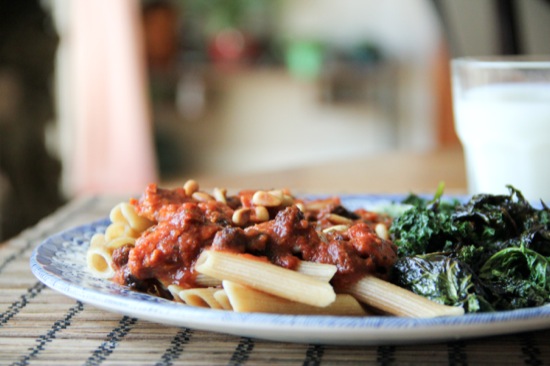 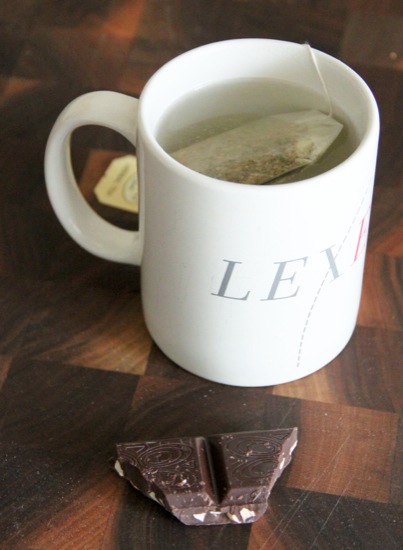 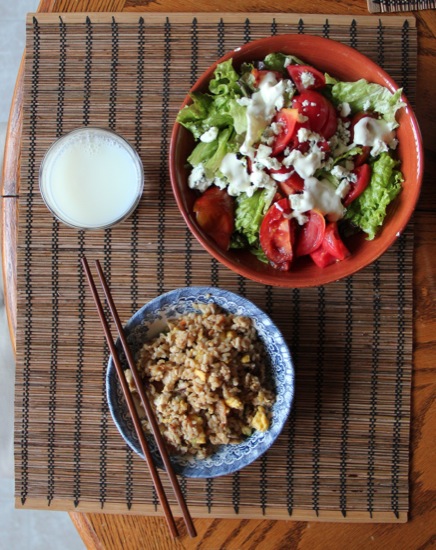 (Why yes, I do eat salad with chopsticks. I dare you to try it.)

I’ve been skipping an afternoon snack for a while and haven’t missed it. I used to be an advocate of eating something every three to four hours, but in my maturity, I’ve found not everyone needs to follow this schedule. Including myself. Learning what works best for ourselves often involves the twin tasks of self-reflection and trial-and-error (both somewhat lacking in this age of GO GO GO).

So, dinner. Peter was away at a conference this past weekend, and before he left, he insisted on making an inhumanly large batch of brown fried rice. Why? 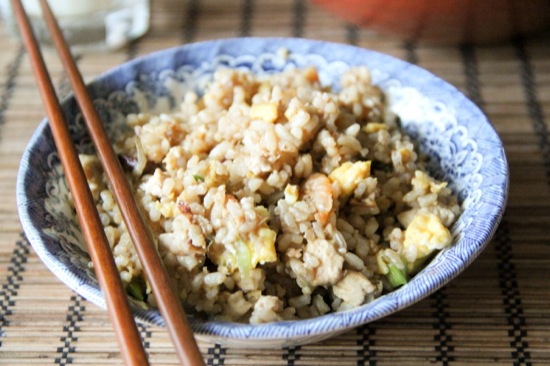 Because I would probably eat balanced-yet-bland meals otherwise. Although I enjoy cooking most of the time (and baking 100% of the time – if there’s chocolate in it), I’m an inattentive cook. If Peter wasn’t around, my meals would consist of plain brown rice or whole grain pasta, some chopped tofu or beans, and a mess of veggies, all laid out in a vague MyPlate.

It’s not a stretch to say: If it wasn’t for Peter, THIS BLOG WOULD NOT EXIST. True fact #1.

He pushes me to try new recipes and has helped me appreciate the flavor of quality ingredients. Before I met him, I thought Kraft singles in plastic were totally legit. True fact #2.

My diet would be pretty monotonous without Peter’s refined tastes. That’s one of MANY reasons why I’m always thrilled to see him after an absence. For example, while I was in China, the ease of eating in the university cafeteria or out at restaurants is the only reason I didn’t down several spoonfuls of peanut butter and call it a day, like in this post. True fact #3.

It’s like Peter is my culinary compass and without him I have a distressing tendency to lose myself in the wilderness of too many food choices. I’m usually an “eat to live” kind of person. Thank goodness for a scrumptious (in every sense of the word) polar opposite.

So, in the middle of last week, Peter asked me what I wanted to eat for dinner over the weekend. I refused to answer his question, instead saying something along the lines of: “Don’t worry, I’ll cook something.”

What was that quote?

Insanity is doing the same thing over and over and expecting a different result.

Yep. That sounds about right. That’s why I enjoyed this brown fried rice with a large salad and skim milk on the side. The salad had chopped homegrown tomatoes and a pretty-good blue cheese dressing. I plan to make my own dressing soon, and I suppose I can thank Peter for that idea.

To celebrate Peter’s awesomeness despite his absence, I enjoyed several flavors of homemade ice cream, including vanilla bean, chocolate peanut butter, and guava. Yes, all handmade by Peter. 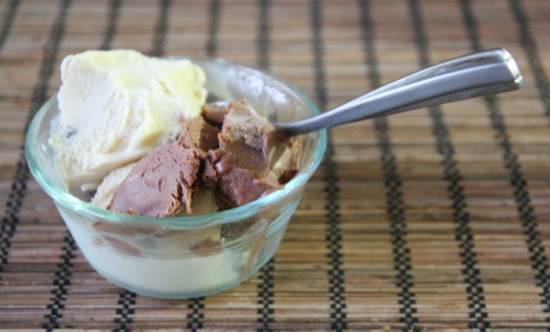