This post is a continuation of the Monday Munchies series where I show everything I eat over the course of single day. These eats took place last Friday, and I almost didn’t post them because the day was kind of bizarre.

The bizarreness began at 2:30 am, when I inadvertently woke for the day. I wish I could say Friday was the only day last week when I woke so early, but … well, I mean, c’mon.  When I begin a sentence like that, you can guess the rest.

Zombie Jessie did a little work as the sun rose, then stumbled downstairs to eat 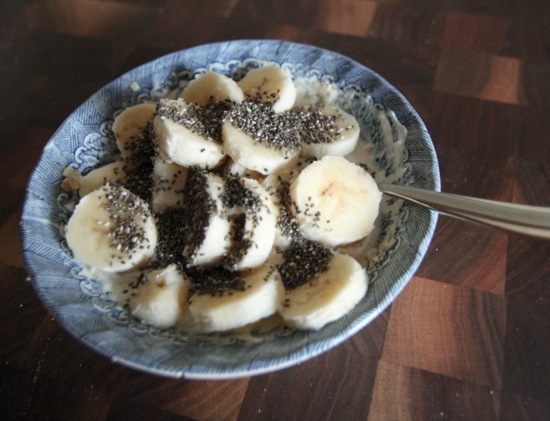 The bizarreness continued with the Bircher museli picture, which looks oddly stretched out because (1) I forgot to switch out the wide-angle lens for the regular one, and (2) I’d like to think zombie-ness had something to do with it. Anyhow, Bircher museli. With banana and chia seeds.

I shuffled out earlier than usual because I was set to represent Strawberry Fields at an outdoor health fair for kids and their parents. It was a beautiful day.

I set up a table with props and activities … and a cup of coffee. 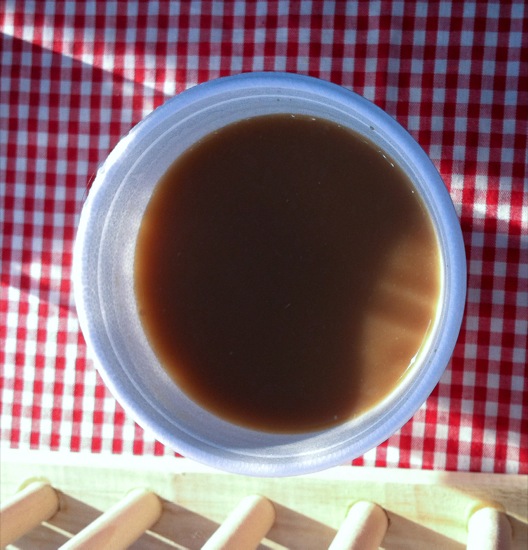 This 4-ouncer was my first coffee in a while. Not sure it counts – the coffee was so weak, the caffeine likely dissipated before it reached my neurotransmitters.

The “How much added sugar?” prop (notice the sweet tea bottle in the back): 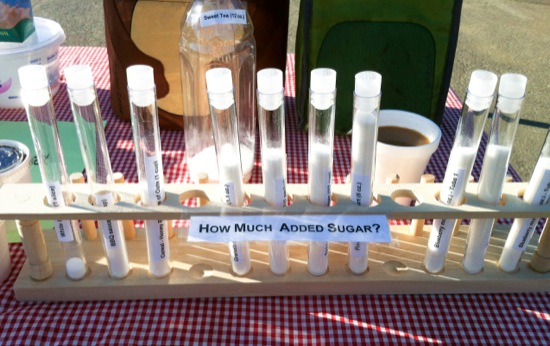 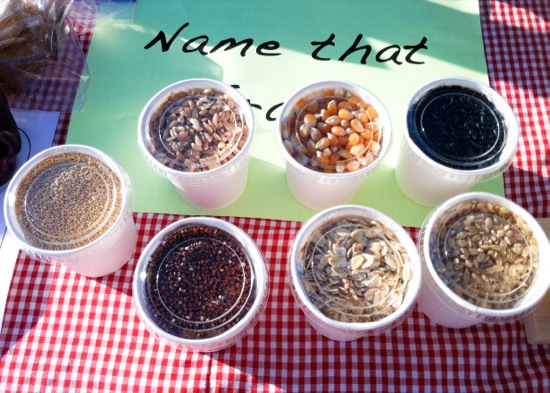 I was impressed with how many kids could identify quinoa.

One of the lunchboxes I used in the “Fill a Healthy Lunchbox” Challenge: 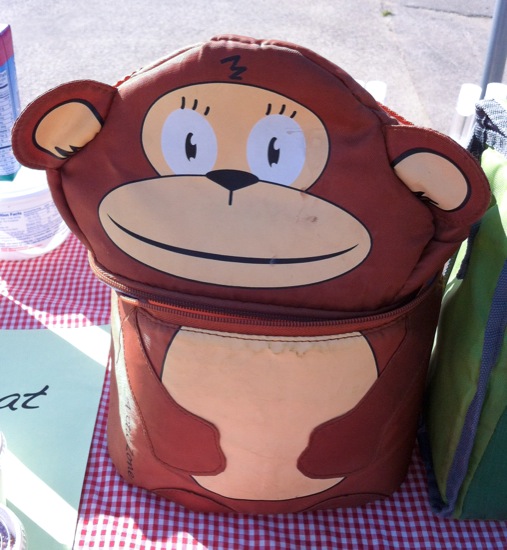 I’m totally getting myself one of these.

Hanging out with the K-5’s was a blast despite the brain-fog.  The kids loved handing some foods they’d never heard of before, guessing the grains, and filling the lunchboxes (unsurprisingly, that was the favorite activity). Still, I have plenty to learn about working with large groups of lightly-supervised children. See if you can spot the problems below: 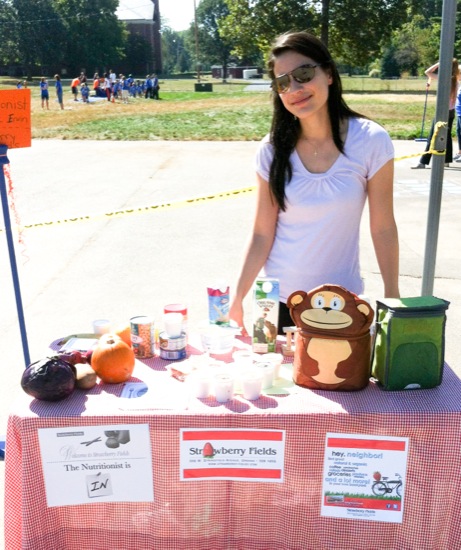 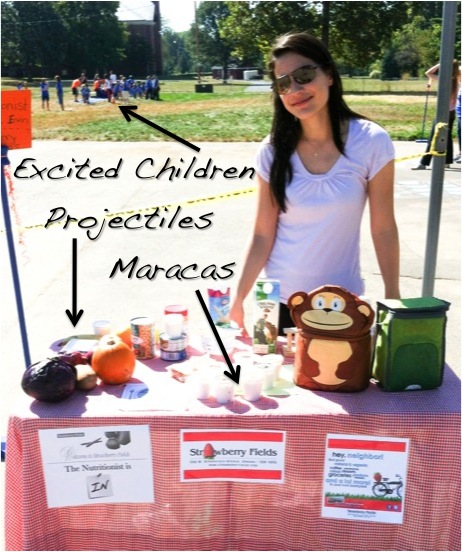 And that’s why I had to set some ground rules after the pomegranate ended up on the other side of the blacktop.

Mid-morning, I snacked on a string cheese from Strawberry Fields. 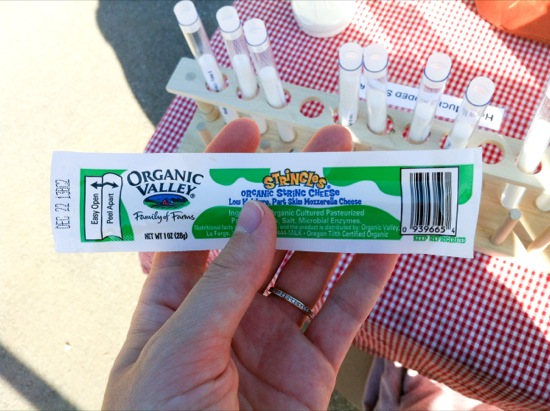 The morning was fun, but by the time I got home I felt a little sick. The week was probably catching up with me. With little enthusiasm, I ate 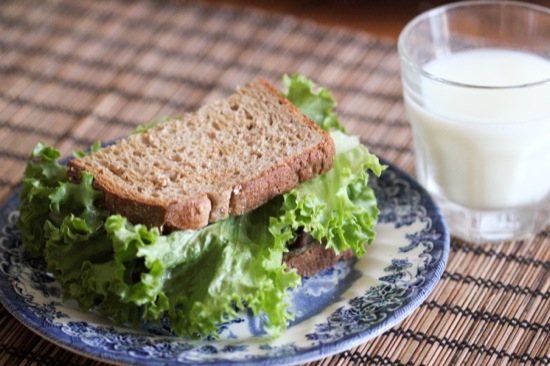 A few slices of leftover steak with lettuce and a slice of bread, served with skim milk.

I felt a little better after eating, so I snacked on a few of these (any guesses as to what they are?): 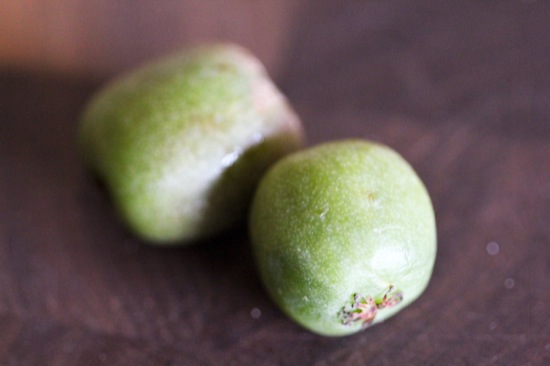 These are kiwi berries! The kids thought they were awesome. If you cut one in half, it looks like a mini-kiwi, but the taste reminds me of longan fruit. Very sweet and tangy. Try ’em if you see ’em (and if you live in this area, Strawberry Fields carries them).

After eating, I did something I haven’t done in a long time: ignored the pile of work waiting for me and took a nap. For two hours.

I’m not a fan of naps because I tend to wake up like a tired baby: disoriented and cranky. Last Friday was no different. But that was okay, because the Jessie Zombie was gone!  Fortunate, as Peter and I went out to 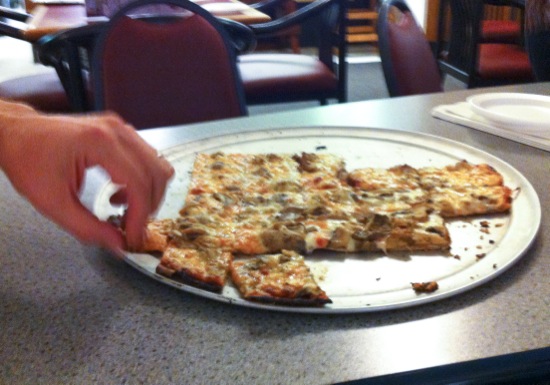 Peter and I went bowling with some super people and nibbled on a yummy thin crust pizza. My favorite part of the above picture is the phantom hand grasping that corner piece. 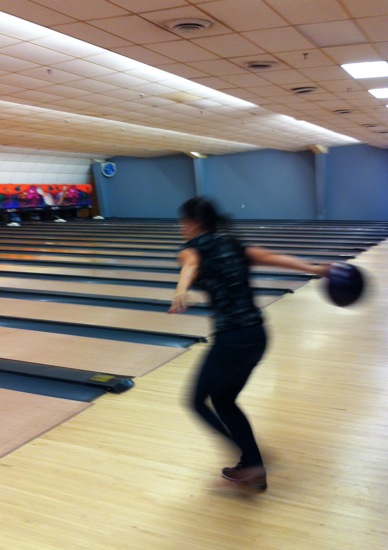 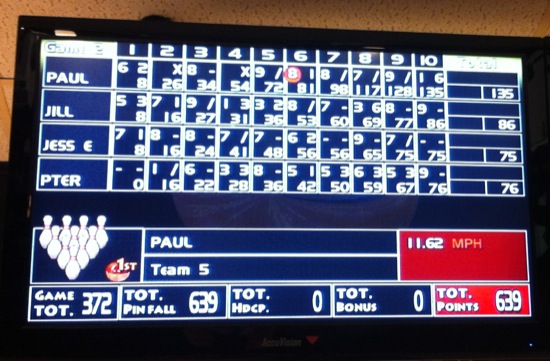 Guess I won’t be joining a bowling league anytime soon.

The pizza wasn’t quite enough for dinner, so when we got home, I ate a mini-salad with tomatoes, mozzarella, and homemade dressing. 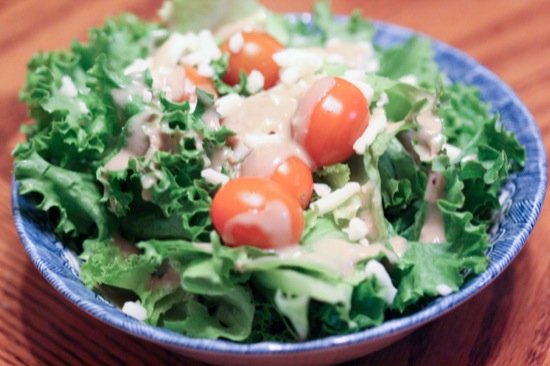 Q: Can you guess the whole grains? Here’s the picture again: