I was so unprepared for today that I brought this for lunch: 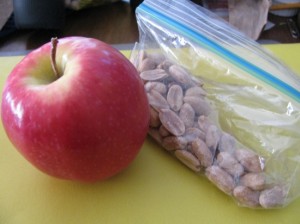 A good snack, but not enough for a meal. With my planning, Type A personality, I was really surprised that I was so caught off guard. I chalked it up to a long, tiring week, and I didn’t beat myself up over it. I will have days where events don’t go according to my grand plan … but, that’s ok! We can be so tired and stressed that we don’t plan anything, and the first thing we reach for when we’re tired and hungry is a bag of chips, or a candy bar. It happens. When it does, we just start over again tomorrow.

I met with some of my classmates to work out our lesson plan for teaching “Brain Foods” to eighth graders next week. I think we’ve got a good start. Does anyone have any tips for engaging eighth graders?? What were you like when you were 13 years old?

I know that I was pretty disinterested in everything at that age. 😉

I was pretty tired after our meeting and ready to make the long slog home. I called Peter to let him know (in an exhausted voice) that I was heading back. He happily announced that he had a “surprise dessert” in the works for me, and that we should go to Whole Foods for lunch. Would I like to go?

Peter truly is my knight in shining corduroy, giving me a little nudge in the direction of contentment when times are tiring. Why corduroy? Because of these: 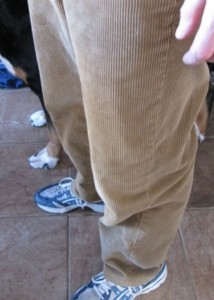 Comfort x10. Uniquely Peter (Sounds like a fragrance … strong enough for a woman, but made for a man. Especially those corduroys 😛 ).

To move away from textured pants; lately, I’ve been guilty of filling up my memory card with dog pictures. Today was no different. 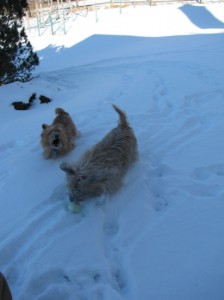 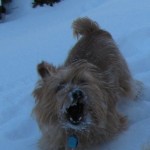 Makes you shiver in fear, doesn’t it?

Since we’re up in Glastonbury for the week, we decided to head north to The Student Prince. This German restaurant has a nice vibe and is always crowded. 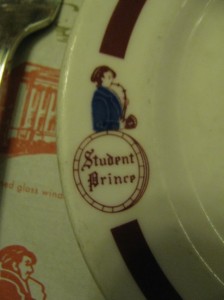 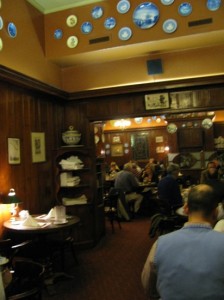 The Student Prince offers a number of unusual dishes, including Hasenpfeffer and game kebab. I was interested in their quail special, but they were out so I went with my go-to restaurant dish: salmon. 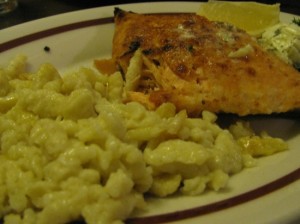 In front is spätzle, a type of German buttered noodles. Sadly, the salmon was really dry (Peter was right when he said that you shouldn’t order salmon in a German restaurant). I ate about half of the salmon and three forkfuls of spätzle. Yeah, it was that good.

Peter order sauerbraten with red cabbage and some type of potato dumpling. 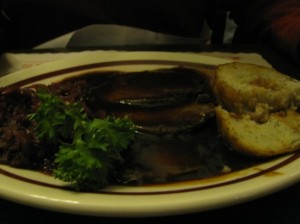 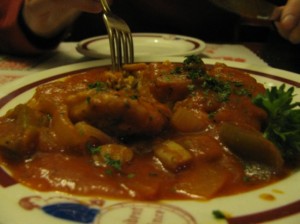 The alligator was a little bizarre: grey-colored, fairly tasteless, VERY chewy. I don’t think I’d order it again, but it was interesting to try once.

After dinner, we high-tailed out of there because we had brownies on the brain: 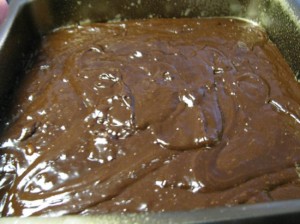 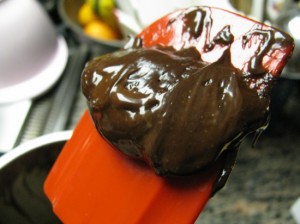 Yup, this was Peter’s “surprise dessert”. What a guy! He sure knows the way to a Jessie’s heart. You can get the recipe here. We made a rich ganache frosting to spread on top. 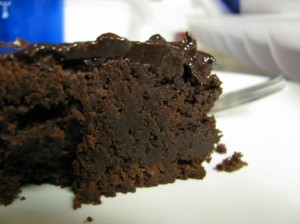 This dessert is one that I will enjoy sloooooowly. 🙂

Edited to add: I realized that The Student Prince doesn’t sound like a good restaurant from my description. I want to pop back in here to emphasize that I really enjoy The Student Prince. We’ve eaten there several times during college and afterward, and they’ve served excellent food every time. Usually I order better, e.g. once I ordered the game stew and it was excellent! Their onion soup is rich and flavorful, and the alligator sauce was spicy and full of tomato-ey goodness. The service is nothing short of prompt and friendly. We’re planning on going there again when we get the chance.

I guess my previous lack of language skills is what I get for blogging on a full (of chocolate) stomach!