Being married to Peter is an adventure. No, really.

I’ve had readers ask me how Peter can possibly find time for his many food-related hobbies, such as taste tests, making vanilla-extract (from specially-acquired vanilla beans, no less), constructing sous vide machines (and I do mean machineS in the plural), convincing his favorite restaurants that it would be a good idea to work in their kitchens … the list continues.

(Perhaps my mac ‘n’ cheez taste test was an attempt to model myself after the culinary adventurer that is Peter, and yet … mac ‘n’ cheese. How uncouth.)

How does he do it? Well, to offer a past example as an explanation: while I was slavishly devoting hours and hours to problem sets and studying for my single physics major at Amherst College, Peter picked up honors in his two majors (math and economics), as well as ranking in the top one percent (one percent!) of our class and joining Phi Beta Kappa during our junior year. All this while barely raising a finger except to throw a disc during an Ultimate frisbee game. In fact, I believe Peter’s fascination with the culinary world began during this time of boredom – despite having no kitchen to speak of, he managed to make me a chocolate cream cake for my birthday during our senior year of college (shortly before spilling a pint of cream all over his favorite chair – whoops, was I not supposed to say that? 😉 ).

Needless to say, I’m in awe of Peter’s energetic pursuits. His latest project? Growing his own chili peppers, including rare species and varieties that are not imported to the US (but legal, nonetheless).

He began back in the spring, planting mail-order pepper seeds in pots (smack-dab in the middle of our kitchen, of course) and gently coaxing the seedlings from their comfortable shells into the florescent light of day. After months and a transplant into the ground at his parents’ house (thanks, Dad!), his little seedlings have borne … well, fruit. 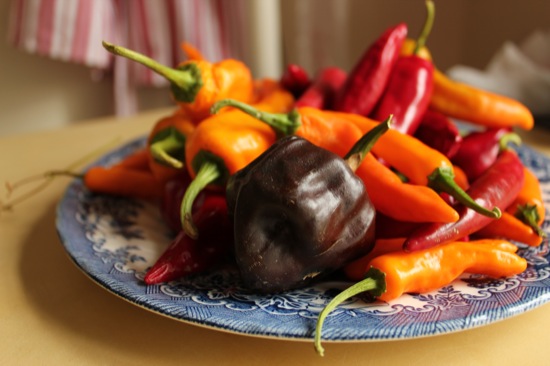 These peppers are just a portion of his bumper crop. I see many spicy meals in my future.  The black chili in front is a chilhuacle negro, a very expensive chili that only grows in southern Mexico and is not available here in the U.S. 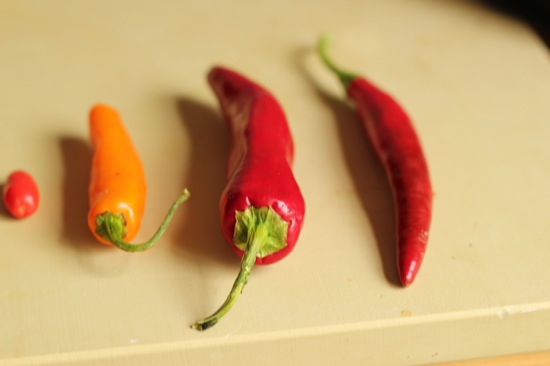 The little red chili on the left is an Inca Lost chili, a rare Mexican variety (incorrectly labeled as a piment d’espelette earlier).

A quick trip through the dehydrator (and the spicy, cough-inducing air that dehydrating entails) and the peppers are ready for grinding or storage. 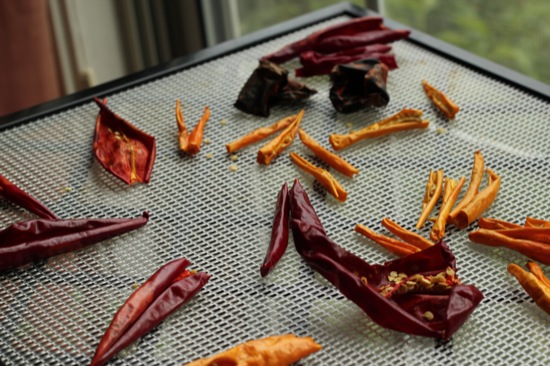 Peter kept a few peppers back for making a classic mole sauce.

To make the yellow mole: roast unpeeled garlic clove on an ungreased skillet (or right on the burner, like Peter did) over medium heat until soft and black in spots (about 15 minutes). Cool and peel.

If you are using dried chilies, toast the chilies in the same way as the garlic: open them flat and press down on hot surface with a spatula; turn after a few seconds and repeat. Cover the chilies with water in a small bowl and rehydrate for 30 minutes. Drain and discard water.

Place tomato, tomatillos, and onion on a baking sheet. If you are using fresh chilies, add them to the baking sheet. Place baking sheet about 4 inches below a very hot broiler. When they blister, darken, and soften on one side (5-6 minutes), turn and roast the other side. Cool and peel tomato and chilies (ahem, gloves). Transfer tomato, tomatillos, onion, chilies, and any juice on baking sheet to a food processor or blender. Add peeled garlic, cloves, and black pepper. Blend to a smooth puree. Add a little water if necessary. If you like a smooth sauce, press puree through a medium-mesh strainer into a bowl.

Heat oil in a small saucepan over medium-high heat. When it is hot enough to make a drop of puree sizzle, add puree all at once and stir for five minutes. Stir in 3/4 cup of the broth, partially cover, and simmer over medium-low heat for about 30 minutes, stirring occasionally.

Combine the remaining 1/4 cup broth with the 2 tablespoons hasa marina and strain it into the mole. Whisk to remove lumps. Add salt and sugar to taste.

Rick Bayless’s original recipe calls for making your own empanada dough. Contrary to form, we bought tortillas and made wraps instead. You can find a great guide for making empanadas from scratch here. Otherwise, grab your store-bought tortilla and follow along! 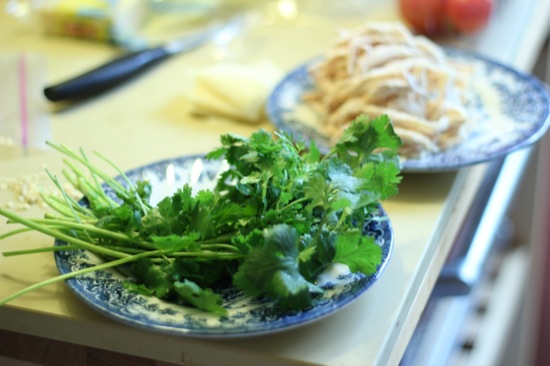 Hold your tortilla in one hand and layer shredded chicken, two cilantro sprigs (or a piece of hoja santa), and a tablespoon of yellow mole in the center. 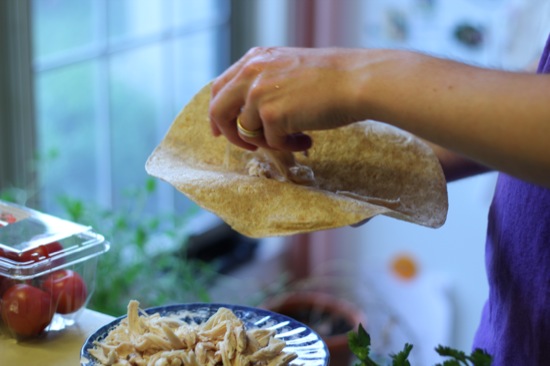 Roll tightly. If so desired, you can place wrap on heated griddle for five minutes, flipping once halfway through. Enjoy! (For leftovers, yellow mole keeps several days in the fridge.) 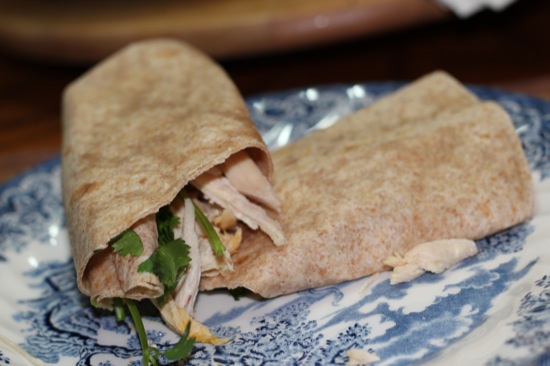 Having Peter for a husband means never having to say your meals are too bland. 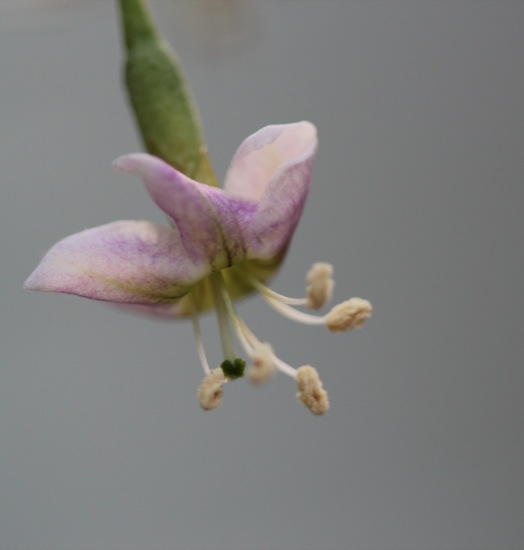 Q: Have you ever had mole? Do you like spicy foods?

P.S. I finally updated the FAQs page – go check it out! … I guess when I wrote “Coming soon!” as a placeholder on that page back in July, I really meant “Coming in a little over two months!”