After the accidental Ricotta Week due to my excessive retail grocery habit, I asked for suggestions for planned Ingredient Weeks. You delivered!

The first Ingredient Week was suggested by my sister Courtney, who recommended pumpkin. In the spirit of choosing challenging ingredients (a.k.a. trying to make Ingredient Week as difficult as possible), I almost decided to push pumpkin until later on in the year when it wasn’t expected.

I’m all for choosing in-season fruits and veggies (let’s just ignore the fact that I’m using canned pumpkin in this recipe, shall we?). Also, with Halloween just one day away, why not embrace this delicious orange veggie?

And so, for the first Pumpkin Week recipe: Pumpkin Mac and Cheese! 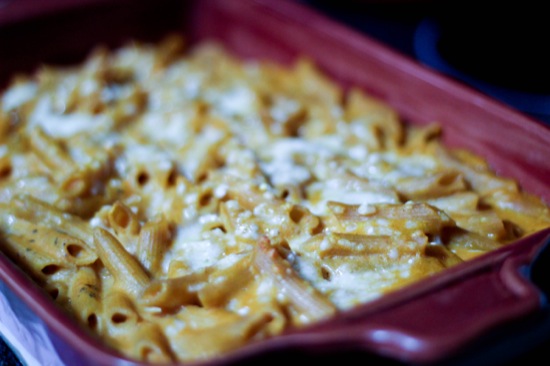 I made the recipe lighter than traditional mac ‘n’ cheese recipes by relying on the canned pumpkin to thicken up the sauce (instead of, say, cream). The final result is melt-in-your-mouth creamy.

On a whim, I also added a dried herb that I’ve never used before. 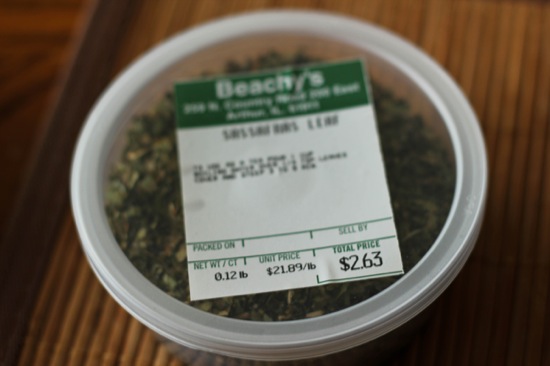 That’s right: sassafras! I swear, I’m not as crazy as this post makes me seem. 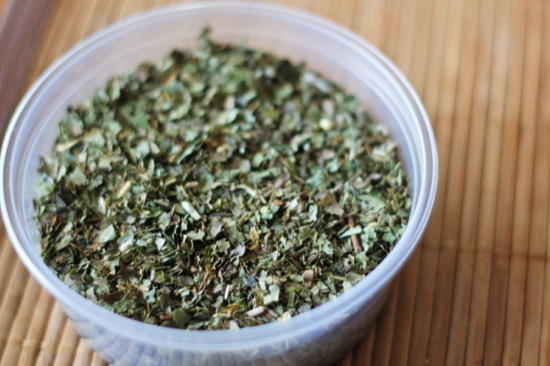 We found dried sassafras on our visit here. Having never used sassafras before (except as file powder in gumbo), I felt a little foolish adding it to mac ‘n’ cheese — and yet! There’s something to be said for being fearless in the kitchen. On another note, it’s funny how often “fearless” and “foolish” coincide.

In this case, being “fearish” paid off: the sassafras added a rich flavor layer to the mac ‘n’ cheese I’ve never tasted before. All of this was lost on Peter, who proceeded to douse his portion in Frank’s hot sauce per usual. 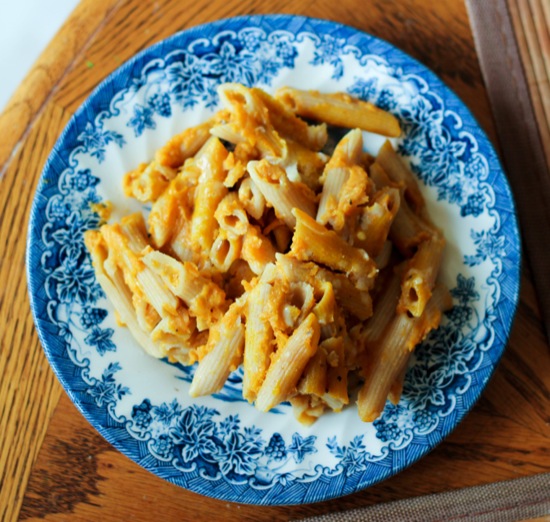 Preheat oven to 350 degrees F. Cook pasta in a large pot according to package directions. Drain cooked pasta and set aside.

Melt butter over medium heat in a large saucepan. Stir in flour, salt, and pepper, then add skim milk. Cook and stir over medium heat until slightly thickened and bubbly (it won’t get very thick yet). Stir in cheese, pumpkin, and sage or sassafras and cook until cheese is melted.

Stir pasta into sauce until pasta is coated. Transfer pasta and cheese to an ungreased 2-quart rectangular baking dish.

Sprinkle Parmesan cheese over pasta. Bake, uncovered, for 30 minutes or until top is golden. Let stand 10 minutes before serving.