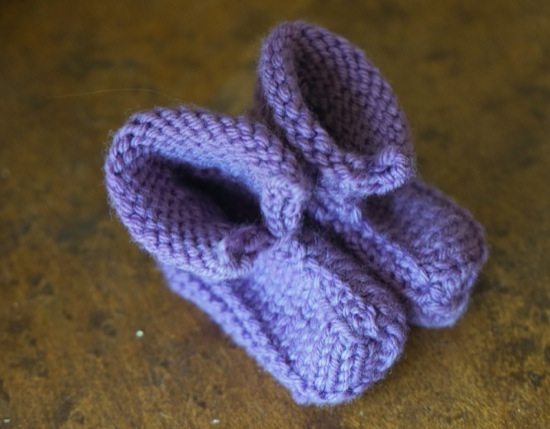 After Monday’s announcement post, I reckon it would be good to pause and reflect on the forthcoming addition to the THIH household. As with prior life changes, I will be doing so in the form of a Q&A with myself. Because clearly the combination of pregnancy brain and a busy MBA program have left me unable to come up with a more interesting method of communication.

Q: Why in Maddie‘s name did you wait until you were over 33 weeks along to mention anything?

A: You may choose from the following answers:

(1) Jessie is laaaaaaazy.
(2) Jessie is busy. (And, once again, prefers referring to herself in the third person.)
(3) Jessie was sick. (Unfortunately, true.)
(4) Jessie was was unsure whether or not she should bother mentioning it.
(5) All of the above.

Guys. You know the answer is (5). Let’s tackle these one-by-one.

(3) Sadly, morning sickness struck with a vengeance early last April and didn’t let up until early July. Also, it’s been said before, but the term “morning sickness” is a complete misnomer. Try “all day miserableness.” I have a distinct memory of giving a major presentation on stage in front of my entire business school community in late April and praying I wouldn’t get sick or pass out in the middle of a sentence. It was bad, especially since I couldn’t tell anyone what was going on because I was still in the first trimester. I’ve never been so dehydrated as I was during those months (and now the infused water post has context). I ended up having to take medication to function during that time, which I was unhappy about, yet it was either the meds or being bedridden for however long the sickness lasted. I feel fortunate that the sickness ended at week 20 because I’ve heard it lasts all nine months for some women. 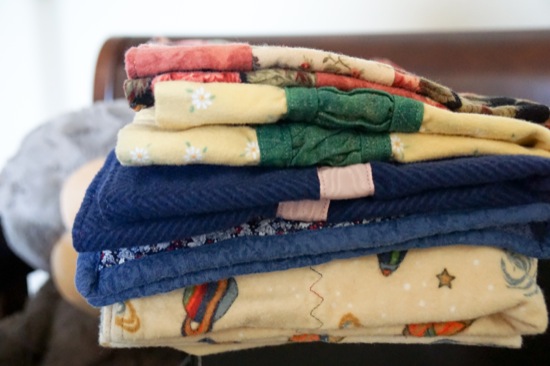 (4) Despite the relaxed tone I take with my posts and the occasional personal topics on which I’ve written, this blog is first and foremost the professional blog of a registered dietitian. You may notice I’ve tried to steer it thus by posting more about nutrition information and healthy recipes rather than, say, sunflower jealousy or judging BBQ competitions. (Okay, the chainsaw carving post was a diversion.) THIH was never going to be one of those blogs with an excited pregnancy announcement followed by months of detailed weekly pregnancy updates. Thus, no mention.

Also, despite running, you know, a blog, and Tweeting and Facebooking and all that, I’m a pretty private person. For example, as far as I know I’ve never mentioned my last name on this blog. Silly in retrospect, because if I Google my full name (and of course I have), this website is one of the first results that shows up. Not to mention there are a million pins on Pinterest with the caption [Recipe name] by Jessie [Lastname]. I’ve learned in my social media marketing class that no one is really private online, especially considering all the information I’ve already given away. It’s a hopeless case, really. Still, I have no desire to write about the nitty gritty of pregnancy.

Yet when I thought about it a bit, I realized I could post about topics like healthy living during pregnancy and afterward, breastfeeding, introducing foods, and more. It would be a little weird posting about these topics without a unifying reason, just like it would be strange if I started my Christmas post with “dang, I was up all night with the baby” without any prior announcement.

So that brings us to now.

(5) I really hope you choose this option now that I’ve explained all the choices. If you didn’t, I really can’t help you. 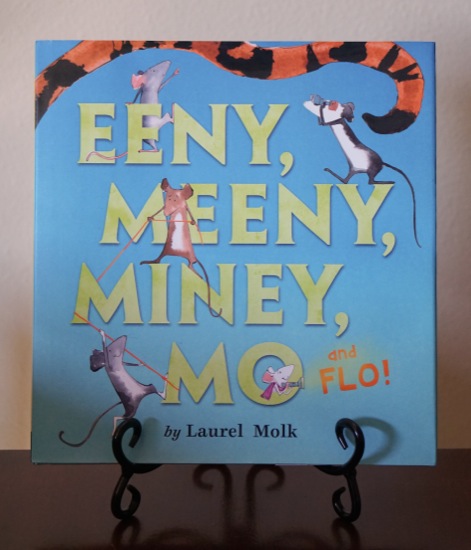 Q: So you’re 33 weeks and a bit? What’s been the most surprising thing about the pregnancy journey thus far?

A: A few things: Exhaustion. All the time. No food cravings (although plenty of aversions) — aren’t pregnant women supposed to crave pickles or something? Also: the belly button. That’s all I’m going to say. 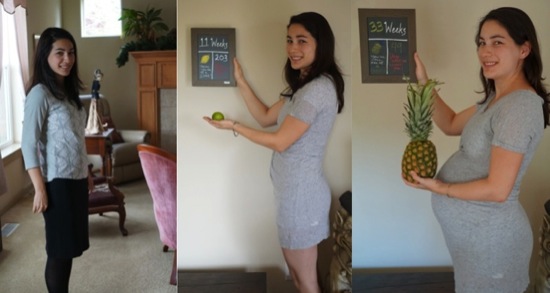 We’ve taken a picture like the two on the right every week so far since week 11 (with the exception of week 18 – not sure what happened there), and what I find most hilarious isn’t the writing on the chalkboard that no one can read without binoculars or the awkward way I cradle fruit, but rather the dress I am wearing (yes, that’s a dress). I didn’t want to buy anything new for these pictures, so I chose something I owned that was neutral-colored, stretchy, and formfitting. What I didn’t anticipate was getting so large, the dress would become a long-ish shirt. A few more weeks and this “dress” may not be appropriate to wear. Also, notice the shift from white to yellow on the chalkboard. That’s because I ran out of white chalkboard pen and was too cheap to buy another. Subtle. Although, now I’ve pointed it out to you, so …

Q: What’s been the most amazing thing so far?

A: At 19 weeks 6 days, I was sitting in the first day of my summer class (Business Organizations) when I felt what seemed like insistent bubbles in my lower stomach. Instantly, I knew those were kicks. The kicks went from zero to 60 in no time. Currently, I’m feeling a tap dance on my ribs. Also, my new band name is “Insistent Bubbles.”

Q: Is there anything else you’d care to share about pregnancy, baby, life, whatever?

A: Likely. I envision myself writing a few posts in the next couple of months about pregnancy and some after the baby arrives.

Until next time, toodle pip! 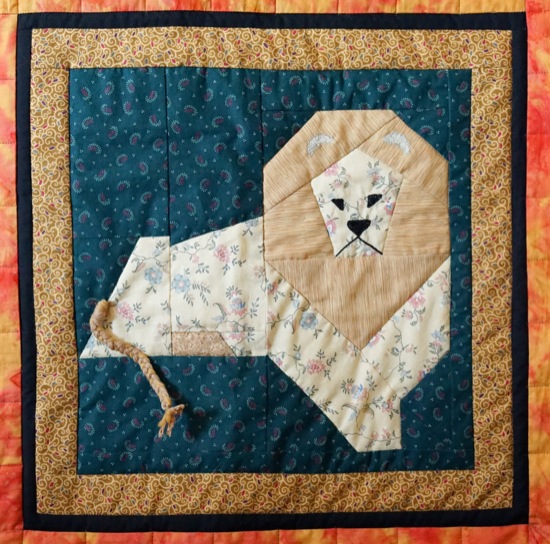