Why am I in such raptures? 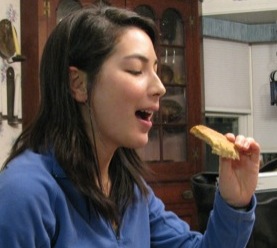 ‘Cause Peter makes a mean green pea soup and an even meaner loaf of bread! 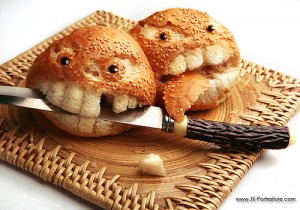 He started making the soup late this morning to allow time for the peas to cook and the flavors to meld. This is a man of dedication. 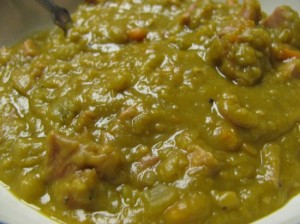 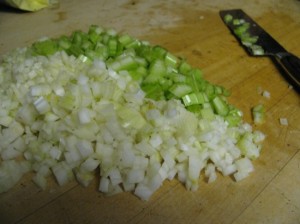 Rinse green peas and let sit in water overnight (put in enough water to cover), or for several hours in the morning (Peter did the latter). Drain.

Heat oil over medium heat and saute onion, carrots, and celery until soft. Add garlic and stir for 30 seconds. (I always add garlic after other veggies or it tends to burn.) 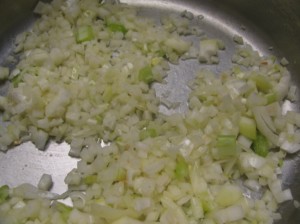 Add drained peas, veggie stock, thyme, and red pepper flakes. Bring to a boil, then lower heat so that the soup is at a simmer. Cook for 3 – 5 hours, or for as long as you can stand it (Peter simmered the soup for about 5 hours, until it was nice and thick). Check occasionally to make sure the soup has enough liquid, and add water or veggie stock if necessary. 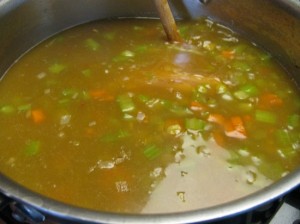 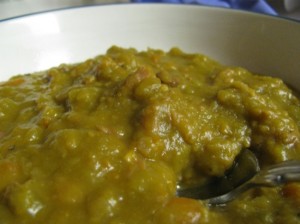 I LOVE thick soups. This one is a winner.

Peter also made a loaf of bread using this recipe. Hey, he makes so much stuff from scratch, I think he’s allowed to use a bread machine sometimes! 😉

For this loaf, he used white whole wheat flour from King Arthur Flour. This stuff is fantastic: WHOLE grain, yet still light when used in baked products. The texture is halfway between a whole wheat bread and a white bread. White whole wheat and regular whole wheat are made from different types of wheat. A good explanation of the the difference between the two is here. 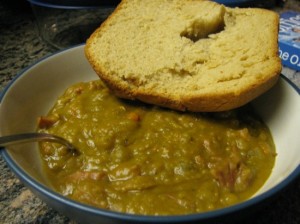 The green pea soup was creamy and filling – just what I like in a soup. I never really liked broth-based soup because they just don’t FILL me up. But this veggie-rrific soup had me satisfied after one bowl. Usually I despise celery (the only food I DON’T like), but all the flavors melded in this soup so that I couldn’t even taste it. This recipe could be modified to have any veggies that you want, like cauliflower or spinach. An immersion blender or regular blender would be able to make the soup smooth, whatever you put in it. 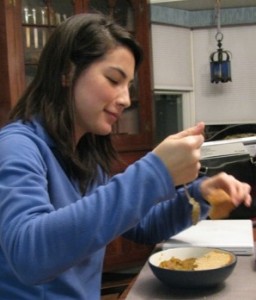 PS #1: Dave send me a link to this page a while back. I didn’t realize that Harvard has a skeletal biology lab studying the bio-mechanics of barefoot running. Their lab group’s website has some interesting videos comparing running with a forefoot strike vs. a heel strike. It is clear that the group members favor the forefoot strike, but I am glad that they offer the following caveat:

“We emphasize, however, that this hypothesis on injury [that forefoot strikes can prevent and alleviate repetitive stress injuries] has yet to be tested and that there have been no direct studies on the efficacy of forefoot strike running or barefoot running on injury.”

I’m interested to see what else comes out of their lab.

PS #2: Enter Meghan’s charity raffle at Travel Eat Love! She’s running the Boston Marathon in 2010 and is raising money for The ALLY Foundation. Each $10 donation enters you into a raffle to get cool stuff, like a custom me & goji mix, a one month membership to Healthworks fitness center, a case of wine from Wine Cellars of Stoneham, a tour and private tasting for 10 at Westport Rivers Winery, and a $100 Williams Sonoma gift certificate. Enter here for a good cause!