There are no pictures of meat in this post. You may be expecting it … but no.

Why meat? Well, as I sneakily alluded to in my last post, Peter and I judged our very first BBQ competition this past Sunday (congrats to LeQuan and Christina for guessing first! Nice job, ladies!) You may remember us taking this BBQ judging class last May. Ahh … we were so naive back then. We thought we were invincible. And, while Peter is fairly invincible when it comes to meat, I often fall prey to the limits of my stomach.

Let us push on! 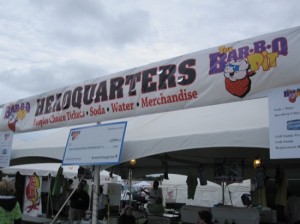 While food figured prominently into this day, I have NO pictures of the actual judging part. Due to the strict judging guidelines for the Kansas City BBQ Society, no photography is allowed in the judging tent. A tip: check out my previous post about our BBQ judging class for a thorough description of the judging process, complete with pictures.

I do, however, have a “before” picture in front of the judging tent: 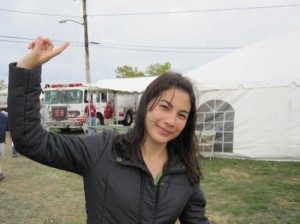 I’m not sure what I’m pointing at, but it ain’t the tent.

During a break in the judging, we strolled around to look at some of the competitors’ setups. 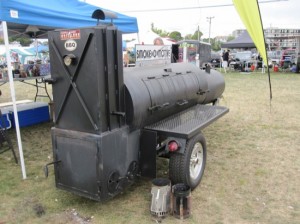 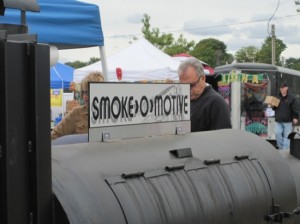 Peter was beyond thrilled when he saw this BIG gem: 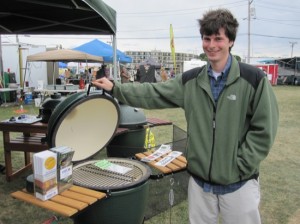 Yep, that’s a Big Green Egg, the sibling of his own BGE. I think he drooled so much over all the eggs-cessories (no, I’m not making that word up) that the Egg owner gave him a bumper sticker that said “Egghead” on it to get him to go away. You didn’t hear it from me, though.

Back to the judgment: I tried to be smart about the judging process. I knew we were tasting 24 (yes, 24!) samples of meat, so I allowed myself one taste of each. Smart in theory, but 24 bites of meat is still 24 pieces of meat. I felt like Bruce Bogtrotter struggling to shove down an enormous chocolate cake, only I wasn’t eating chocolate cake. MEAT. Also, I was surrounded by seasoned BBQ judges who gobbled down their samples with the gusto only true meat-lovers could have. I made it through the judging process, but, boy ….

After the judging, we rolled out of the tent and slowly made our way back to the car. 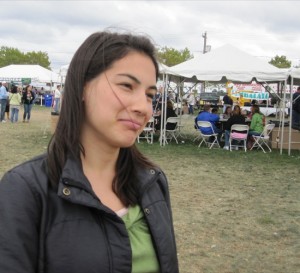 That would be the “after” picture.

Fortunately, you can see more before and after in this short, snazzy video documenting our judging adventure (without any meat, of course):

When we got home, we found Maddie had taken revenge on this poor gorilla: 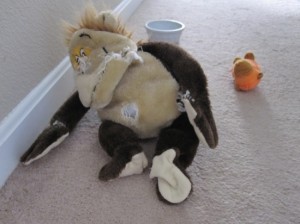 I’m not sure what the gorilla ever did to her, but it must have been bad. She looks so innocent, doesn’t she? 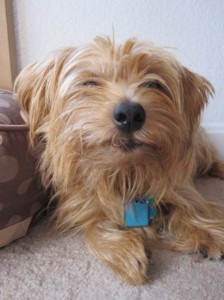 That is the face of a toy killer, folks.

After the extremely large “lunch” of protein, my stomach said to me, “Jessie, give your stomach a bit of rest and revisit me in the morning.” I gulped glass after glass of water to aid the digestion process and went to bed early. A perfect example of my body telling me exactly what it wants – and it’s not 24 samples of meat.

And that, my friends, is the end of the story.

Q: Have you ever overdone it on a single food? How did you feel?