Over the weekend, I posted this picture to THIH’s Facebook page and asked for guesses as to where I might be: 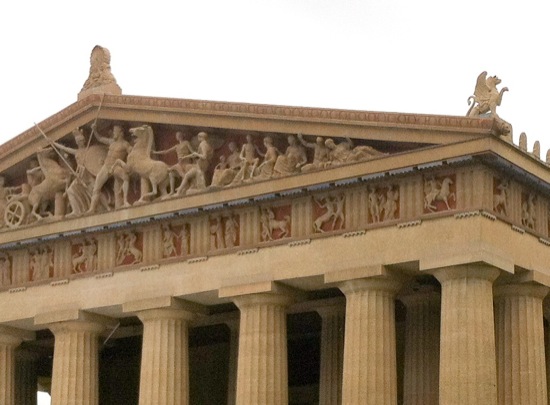 Most guesses were for Rome, which is not too far off … in a way. Although I have to say, despite my 26 hour trip to Paris, I think a weekend trip to Rome may be too much even for this enthusiastic traveler. Christina‘s guess of Springfield was the closest – as a fellow former East-Coast-girl-in-Illinois myself, I’m not surprised! This exotic-looking structure above is actually the Parthenon – in Nashville, Tennessee.

Here are a few more pictures: 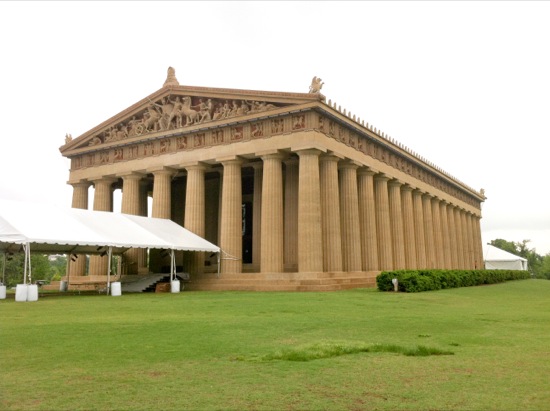 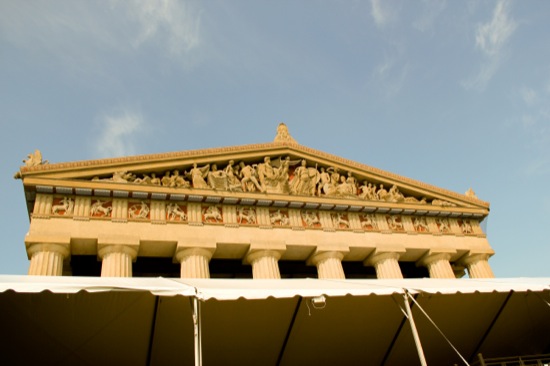 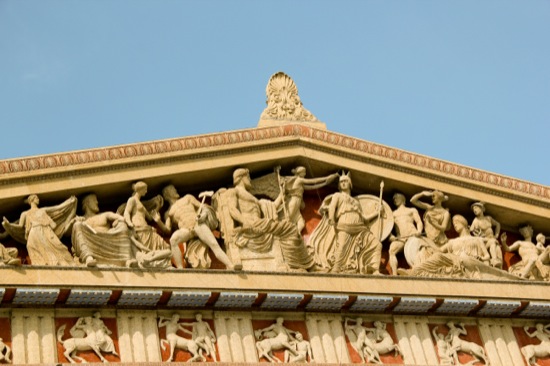 According to Nashville Parks & Recreation, the Nashville Parthenon is the only life-size replica of the original Parthenon (in Athens). It certainly looks quite impressive, albeit not endowed with millennia of history. As I ran by, people were setting up the white tents out front for an upcoming wedding. The fact these same people were installing an enormous white elephant made entirely of white flowers at the entrance suggests Parthenon weddings are quite fancy.

Why were Peter and I in Nashville? Peter had a conference at Vanderbilt, so I packed up some work and went with him to share the driving. Nashville is 5.5 hours south of where we live, and 5.5 hours alone in a car is enough to turn the most mild-manner professor into a kitchen-appliance-loving version of the Hulk. Of course, 5.5 hours (6.5 with traffic) in a confined space with a gal who insists on listening to “Wait, Wait” instead of whatever board game podcast he currently listens to could be just as trying to said professor.

We did stop once or twice on the way, including a stop in Metropolis, IL (this pic is for you, LeQuan!): 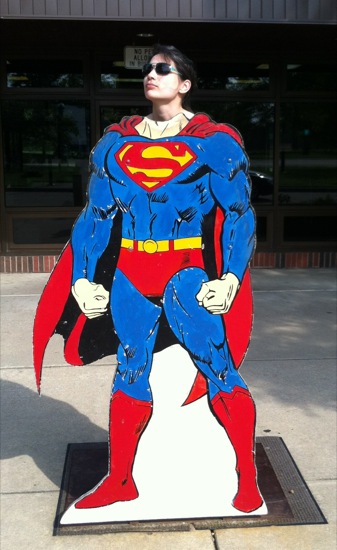 Check out those biceps.

We arrived in Nashville a day early so we could take in a few sights (the rest of the weekend Peter attended his conference and I worked in the hotel room). This is when I gathered further evidence that I’m not a city person. Despite the diverse and sprawling nature of Nashville (seriously, you could drive an hour and STILL be in Nashville – and we did), the city felt confining to me. I apologize to the Nashville fans out there – the city is quite lovely, and in many places doesn’t even feel like a city. But it’s still too much city for me. Peter and I would rather walk with the dogs in Vermont miles from civilization rather than take in a show at the Grand Ole Opry.

Speaking of which … during our day of tourism, we visited the country music hall hoping to tour backstage, but were turned away because they were setting up for something, presumably a show. At least the outside of the hall is impressive, although the Taylor Swift song blaring over the loudspeakers sure didn’t sound like country music. No pics, sadly. Perhaps disappointment had rendered my photography arm senseless.

The best part of the day: checking out the incredible gardens at the Opryland Hotel, just a hop, skip and air-so-humid-it-envelops-every-inch jump away from the Grand Ole Opry. Seriously, if you’re ever in the area, check these out. Peter described the gardens as the “Disney of Nashville”, which is quite a compliment considering he’s tried to get us to visit Disney World since we were in college. Yes, college.

The next two pictures are rather dark; apparently I’d forgotten how to use my flash on this trip. 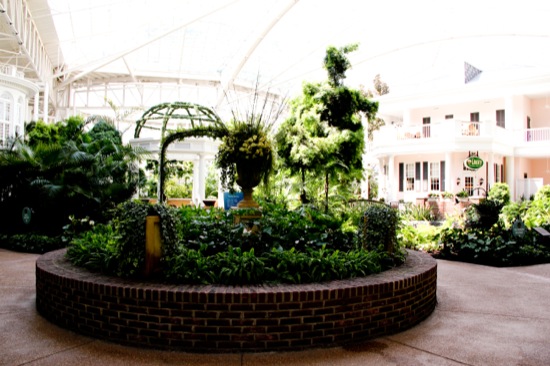 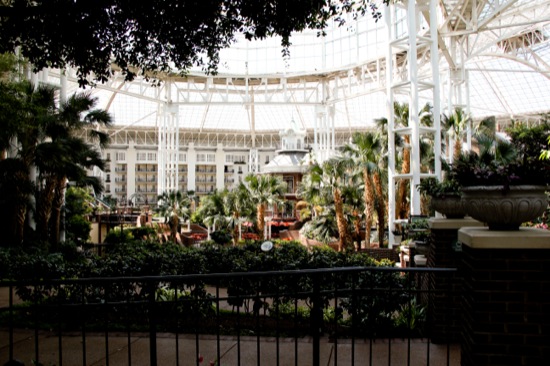 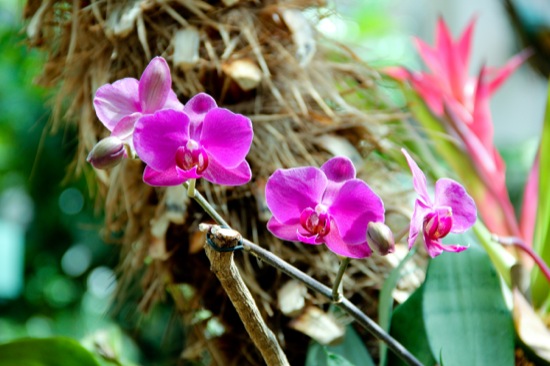 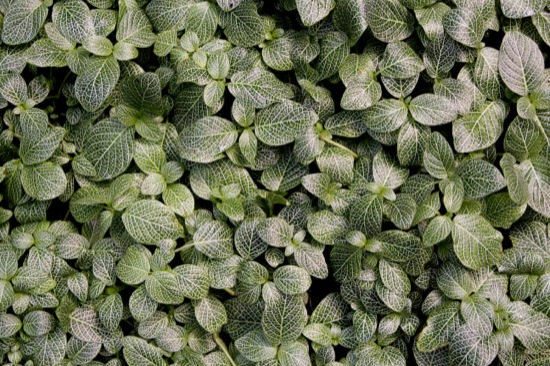 We visited a few other places in Nashville, including Andrew Jackson’s home The Hermitage. The only two pictures on my camera from this excursion are the following: 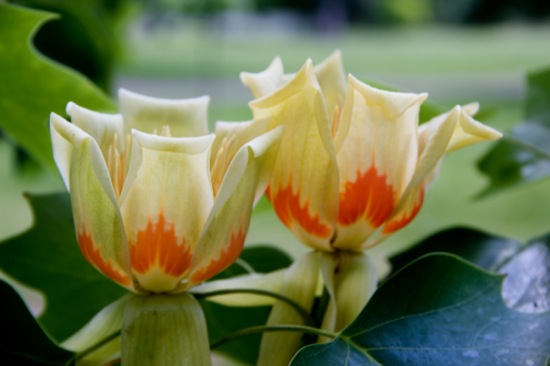 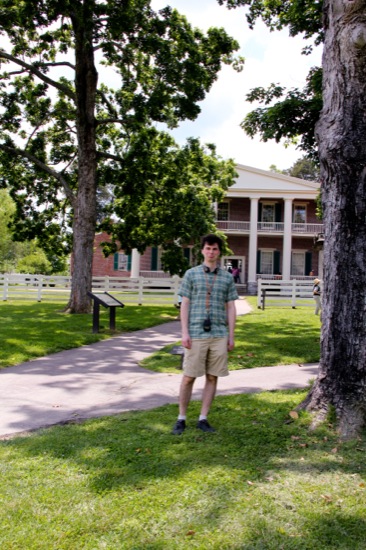 The picture above is Peter’s reenactment of his disappointed face when we found out the line to tour Old Hickory’s mansion was 45 minutes long. I particularly like the bright orange lanyard hanging casually from his neck.

The grounds are gorgeous, but we didn’t end up staying long. I think we were both feeling the heat and humidity at this point. According to a few locals, the conditions are much worse in July and August.

We also visited Cheekwood, an estate funded by a relative of the Maxwell coffee creator. The grounds are beautiful here as well. 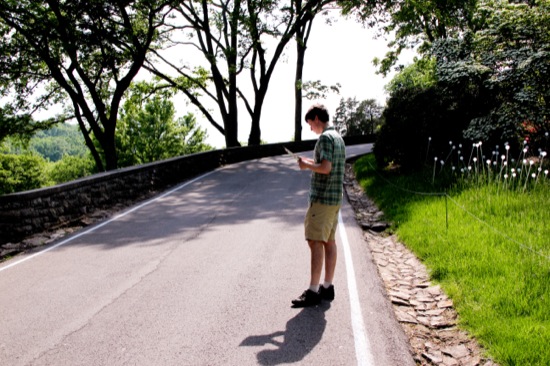 Setting up for a light show: 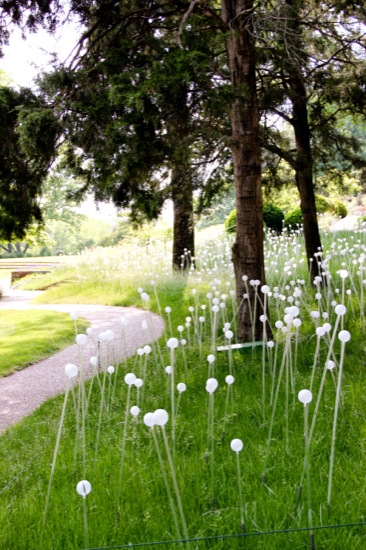 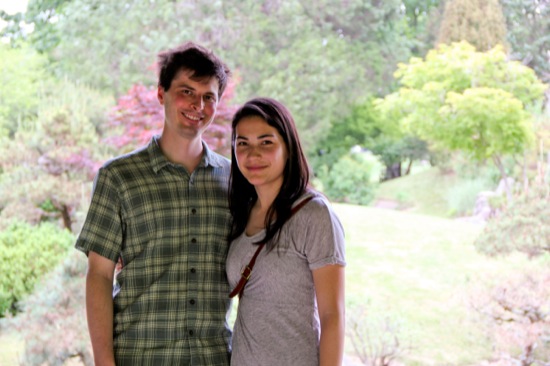 Finally, I’ll leave you with a few food pictures. The hotel had a fridge, so Peter and I enjoyed Bircher Muesli with banana every morning. 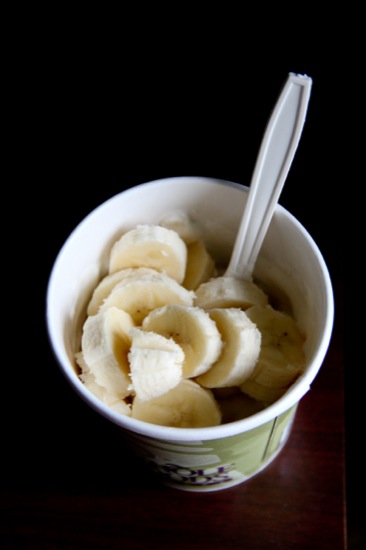 We went out to eat once at the Loveless Cafe, which is an institution in Nashville. Friends recommended this place to us, plus the online reviews are glowing, so we were excited to try it. 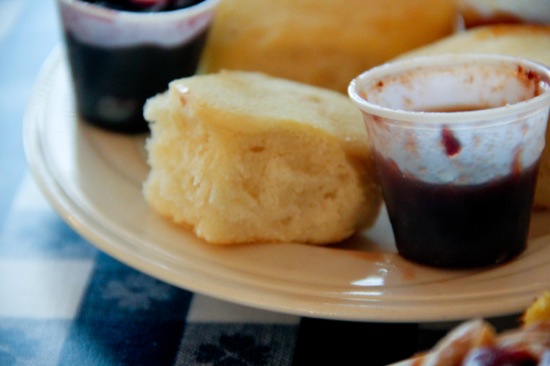 I may gain a few more enemies with the following statement, but here goes: I didn’t like it. The Cafe is known for its biscuits (heck, they even have a signed picture of Kenny Chesney hanging in the front of the restaurant in which he raves about the biscuits), but I found them tough and slightly cold for some reason. The rest of the food (meatloaf, pulled pork, fried chicken) was bland, despite hitting all the salt, sweet and fat spots you could ever want. Even Peter found the fried chicken lacking (although he’s particular about his fried chicken).

And that’s the truncated version of Nashville, as seen through a jaded, non-city-loving gal’s eyes.

Flower pic of the week! Peter brought this curry plant back from the aphid-chomping dead and it’s now covered in gorgeous little flowers. 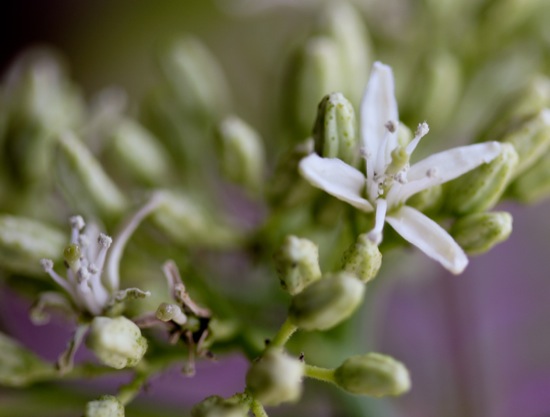 Q: Are you a city or country person?