Dear reader, I must apologize. I’ve mentioned our garden in passing, even hinted at its immense size in several posts. Yet, I’ve never shown you the full picture of this gargantuan suburban jungle. Well, 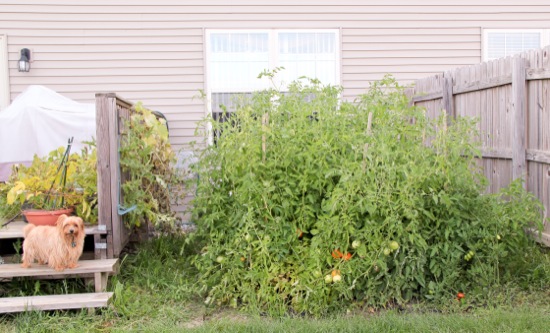 On the left are large bins with three kinds of heirloom melons. The vines are so long, they dangle off the deck. In fact, Peter was forced to use pantyhose to support the dangling melons (and yes, I have no idea what to make of that last sentence. The important part is, Peter has bought more pantyhose than I have.) The main garden on the right extends back about eight feet. In the front are tomatoes, such as this striped beauty of unidentified … identity. 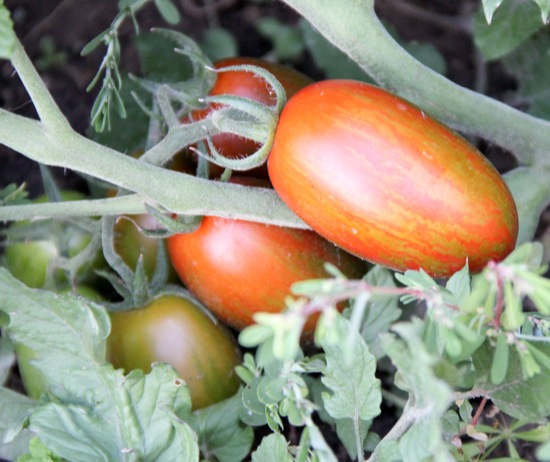 Behind the tomatoes are two of these plants: 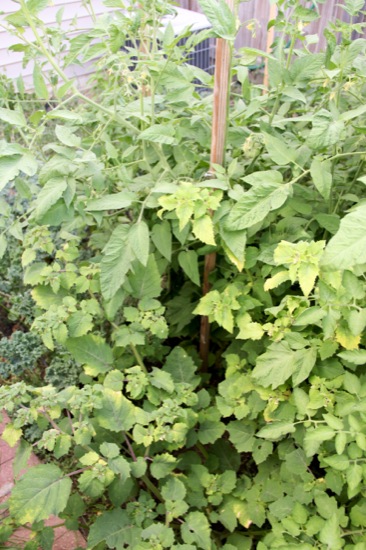 What? Those are just more vines, you say? Well … yes.  But they’re special vines. 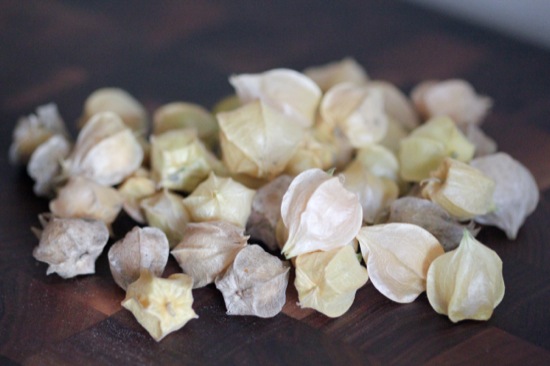 As with the arugula, I did not remember I planted this unusual veggie until one day Peter said*, “Golly, Jessie Supreme Master RD, I think your tomato plants died.”

To my dismay, I discovered the soil underneath the plants littered with these paper-lantern lookalikes. We’ve been rained out a lot lately, so I assumed they rotted on the vine and fell to the ground in soggy despair.  It wasn’t until I gathered a few that I discovered there was a veggie inside.  I’ve since learned ground cherries are presumably called thus because they fall to the ground when ripe. Score!

Unfortunately, I planted everything in the garden too close together, which means I can’t physically reach the ground cherries that fell in the middle of the garden. I can see them, but I can’t touch them.

And that’s why I’m not a gardener.

Just how do these unusual vegetables taste? Very sweet, kind of like a cross between a pineapple and a cherry, but with the texture of a mini-cherry tomato. 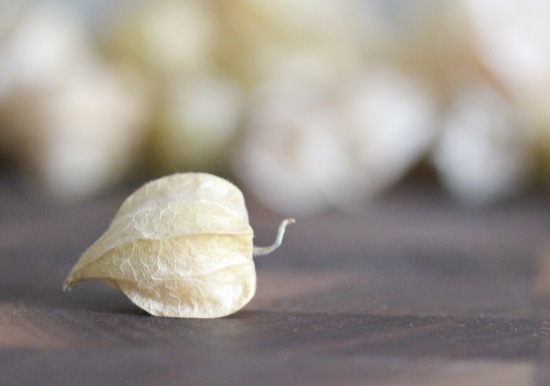 I peeled away the husk for you, 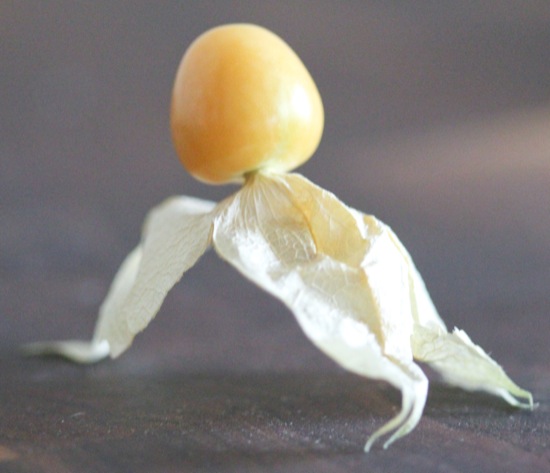 and then realized I have a ground cherry sea monster on my cutting board (with snazzy sunglasses). 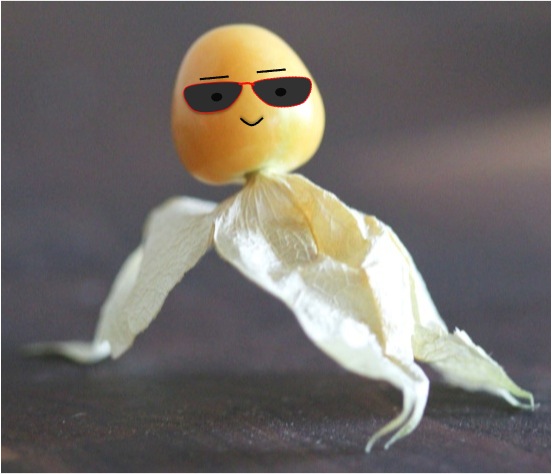 Having never used ground cherries before, I was at a loss as to what to do with my two-handfuls crop. There’s a recipe for ground cherry preserves in my Little House Cookbook that looks delicious, but I’m not a fan of preserve-making. Most recipes seem to treat ground cherries as fruit and incorporate them into pies and jams. I wanted to try something more savory.

First, I dipped a few ground cherries in melted dark chocolate, because why not. Chocolate.

We recently picked up a fabulous fig goat cheese that I had to use. And, of course, our mint was calling my name. And so, this ground cherry and goat cheese appetizer was born. 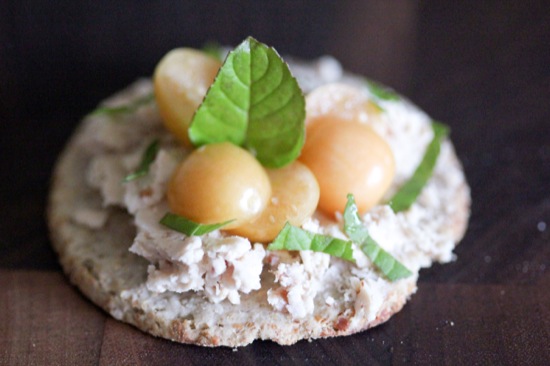 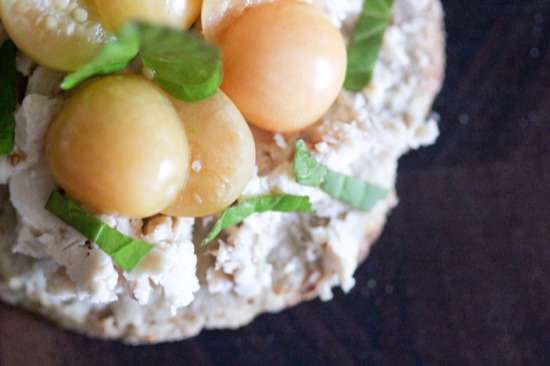 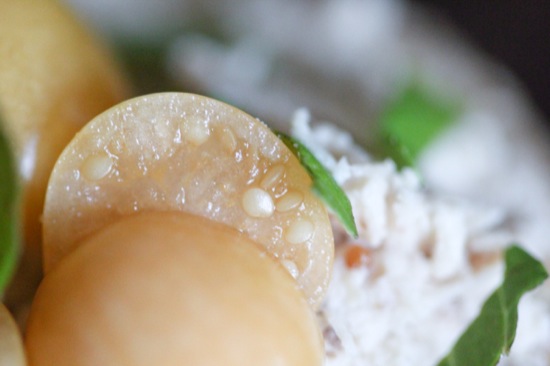 I used a hearty oat cracker (Nairn’s) and a plethora of mint for plenty of taste in each bite. I’d be happy to serve these at any dinner party – as long as the ground cherries last! 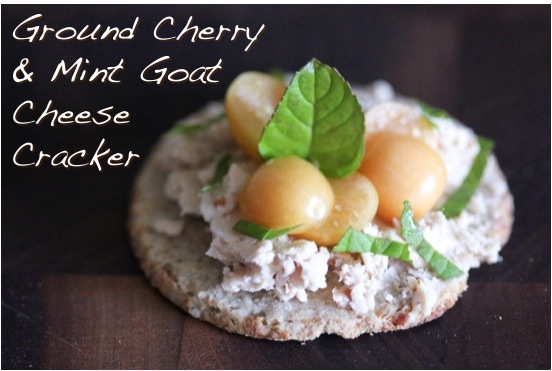 Q: Have you ever tried ground cherries? What the most unusual veggie you’ve eaten?