By now, many of you have heard of MyPlate, the USDA‘s newest healthy eating guide.

For the first time in nearly 20 years, this food guide is not in the shape of a pyramid (for a fascinating look at the evolution of the USDA’s food guides, check out this link). I completed my dietetic internship at the height of MyPlate’s predecessor, MyPyramid, and let me tell you: MyPyramid had a lot of haters. Frequent complaints I heard:

* Confusing.
* Discretionary calories what?
* I honestly don’t think I’ll be measuring out 5.5 ounces of meat ‘n’ beans.
* How am I supposed to separate oils from the rest of the categories?
* The thickness of the bars is supposed to represent something? Really?
* Why is there a cartoon of a guy running up the side?
* And so on.

Hungry readers, I hear you. MyPyramid had its flaws. As its successor, MyPlate is far from perfect. HOWEVER, I am on board with the direction in which these food guides have moved. Anecdotal evidence suggests that MyPlate is easier to understand, and I can see why: a simple visual we see several times a day (i.e. a plate of food) is more effective than a pyramid that requires tons of explanation.

MyPlate is far from new, however. I even wrote about something called The New American Plate in 2010. Look familiar? 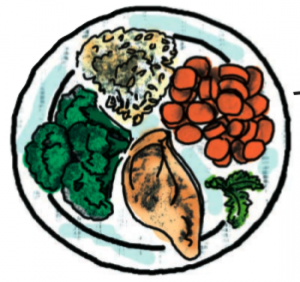 The UK has something called The Eatwell Plate, which, while not constructed exactly the same as MyPlate, does use a plate as a visual: 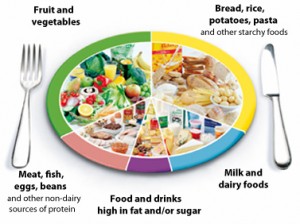 The basic idea behind MyPlate is that by filling your plate with foods in the proportions suggested, you’ll eat plenty of nutrient-packed fruits and veggies and less proteins and grain-based carbohydrates. Following MyPlate will also check the amount of food energy you eat (i.e. calories). Of course, if you eat more than one MyPlate in a single meal, or eat from a 15-inch serving platter, you’ll defeat the purpose here.

What happened to all the confusion behind cups, calories, oils, discretionary calories, and physical activity? These factors still count, but they’re not front and center in the general MyPlate graphic. The USDA still recommends certain amounts per day of the different food groups, and they give guidelines for oils and discretionary calories. See here for more info.

Personally, I’m thrilled the MyPlate graphic is so clean and simple. Some people love counting up cups, calories, ounces, etc., but many people don’t.* Giving someone a task they don’t enjoy makes them less likely to do it, and more likely to say “Heck with it, I’m done”. It’s ironic given my quantitative background, but I think separating the numbers from the food is more in line with how we used to eat before we needed professionals to tell us how to eat.

*Some people need to count, i.e. those with diabetes who count carbohydrates, those with fluid restrictions who must keep track of their fluid intake, etc.

All right. All this discussion is getting a little boring. WAKE UP!

I thought long and hard (i.e. for ten seconds) about how best to illustrate what MyPlate means to me as a dietitian. I could go for hours about whole grains this, lean proteins that, but really, who wants that? I’ll sneak it in later, don’t you worry 😀

Thus, I’ll illustrate through pictures instead. For example, a typical lunch, served on a 12-inch plate (I usually use a 9-inch plate, but the bread was hanging off the 9-inch plate in a rather unattractive manner. In cases like these, I aim to keep the food within the center circle. Approximately.): 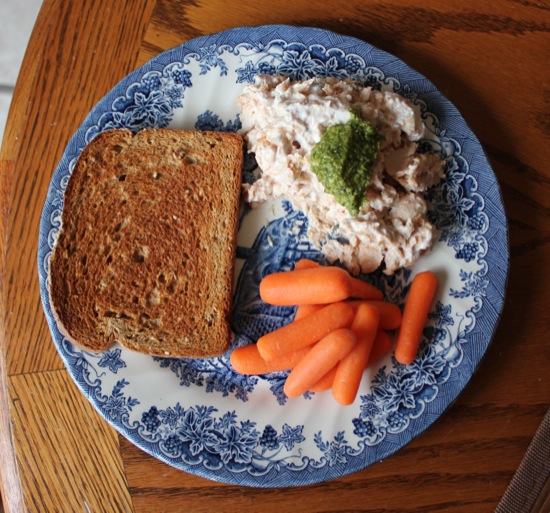 Let’s divide that puppy up. 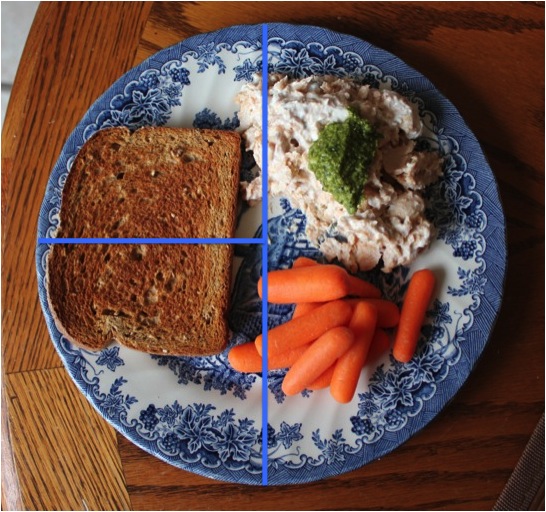 Hmm, not quite. Notice I didn’t divide the plate into “quarters” like MyPlate. I chose to combine fruits and vegetables, because it’s common to have one or the either at meals (e.g. just fruit at breakfast and just vegetables at dinner).

So, how do I update my plate? For starters, that’s a lot of salmon salad. I made it from 1-6 oz. can salmon, mashed with Greek yogurt, mayo, and rinsed capers, and topped with a spoonful of pesto (I’ve been doing that a lot lately!). I don’t need 6 oz. of protein at lunch, so I’ll take away about a third of it.

Next, the veggies are skimpy. I can’t imagine eating half a plateful of carrots, so how about another veggie to round out the plate, such as these beautiful purple beans from the local farmer’s market? 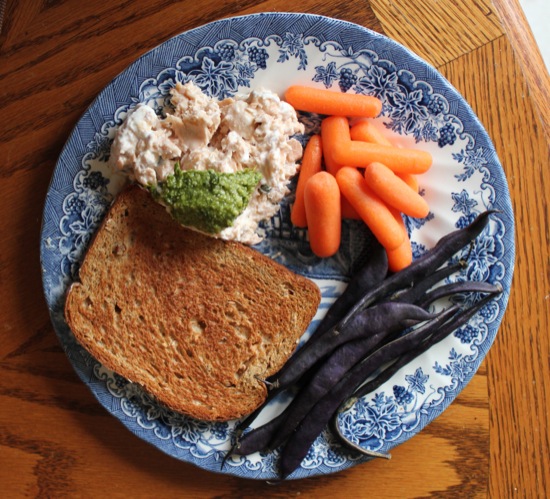 Divided up, with a totally realistic-looking cup of skim milk Powerpointed into the picture because I forgot to photograph it: 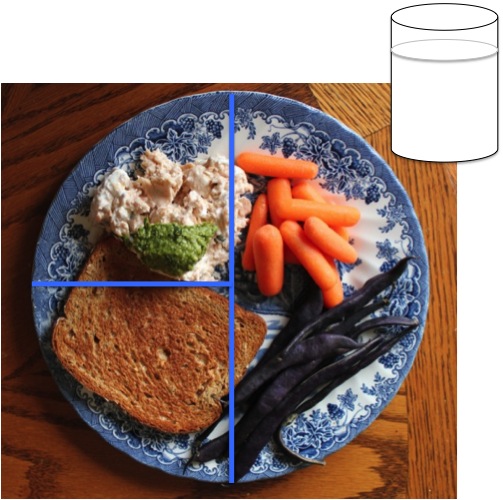 “But, wait!” I hear you cry. “I have so many questions! What about if you go out to eat? Or if you have a casserole or — gracious — even a smoothie? How do I choose what type of grains, or proteins, or — ?”

Patience, dear reader. To keep this post from becoming unwieldy in length, I’ll continue to feature “Update Your Plate”s that will help answer all your questions. I’m a believer in visual learning.

So, until the next “Update Your Plate”, please feel free to ask me questions, either in the comments or through email or by owl.