This week, I introduce combination dishes. My plan is to eventually illustrate some really complicated dishes, like casseroles or stews with a million-and-a-half ingredients.

… but not today. Let’s start small. Also, I don’t have any complicated dishes to show you this week.

The dish below is Fig-Stuffed Roasted Pork Loin from Ad Hoc at Home by Thomas Keller (a fantastic cookbook!). I made it about a week after we moved to Illinois. 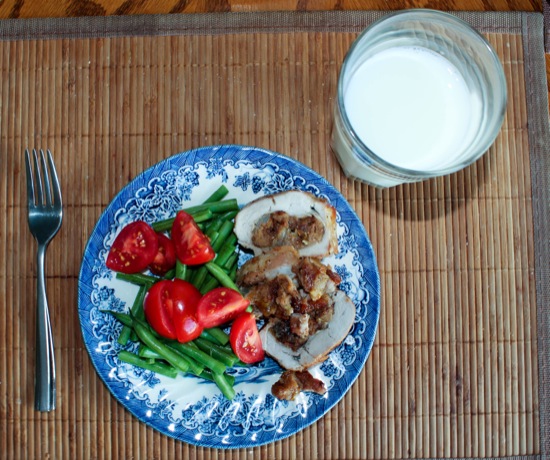 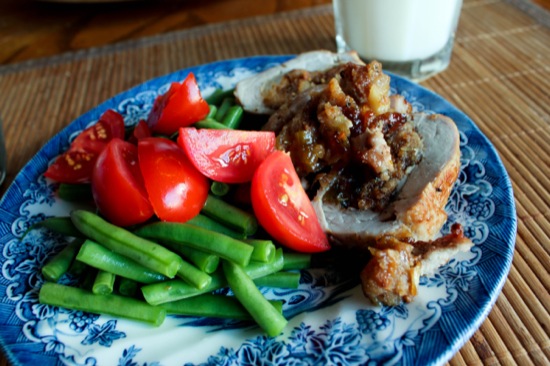 Let’s take a closer look at that plate. 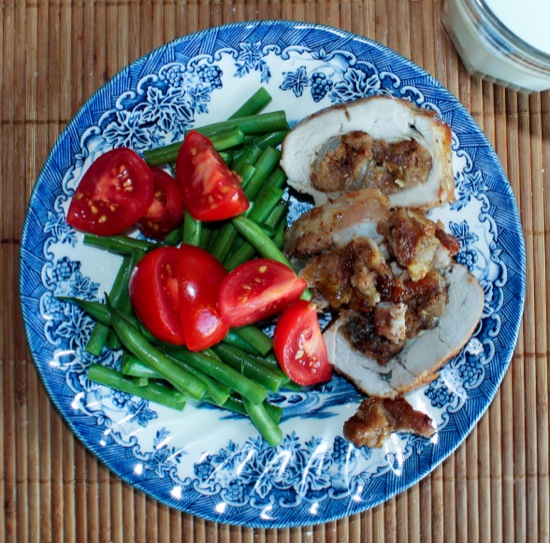 Looks pretty tasty. Veggies on one side, mouth watering stuffed pork loin on the other. But, how do we MyPlate this? (And yes, I did just “verb” the word “MyPlate”.) The protein and grain are all smooshed together! 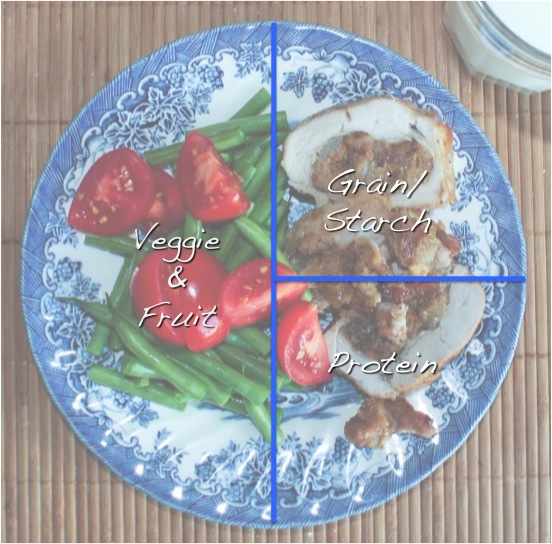 The “Veggie & Fruit” half of the plate is pretty well set, so we can push that to side, so to speak. As for the “Protein” and “Grain/Starch” quarters … you have to use a little imagination.

The fig-stuffed roasted pork loin is pretty much how it sounds: a pork loin stuffed with fig and roasted for a half-hour or so. The actual recipe consists of sauteing shallots, then frying bread cubes in the flavored oil to make a kind of stuffing. Fig jam is mixed into the stuffing (and let me tell you, the combo of fig, pork, and shallots is exquisite).

The original recipe calls for just a few bread cubes for an entire pork loin. I wanted to boost the amount of grain in this recipe, so I increased the bread until the amount was about equal to the pork (besides, this stuffing is just so darn good, who could resist having more?). I used whole wheat bread instead of white bread for a fiber- and nutrient-rich swap.

So! In the final product, the amounts of “Protein” and “Grain/Starch” are about equal. I divided the Protein and Grain/Starch “half” of the plate into their respective quarters to make it easier to visualize.

One final thing: If I were eating this meal again (and I’m sure I will), I would add more food to this plate. The plates I use are only about 8- or 9-inches, so I should be filling those things to the edge. It’s possible I wasn’t very hungry that day, or I had my eye on a particularly heavy dessert. Still, the plate above is not enough food for me in a typical meal.

Have a great weekend, everyone! See you Sunday!

Q: What should I MyPlate next?