Imagine you’re hosting a dinner party. The lights are soft, the conversation bright, the food scrumptious. You’ve just finished a rich veggie lasagna and are eagerly looking forward to dessert: vegan spiced pumpkin ice cream, fresh from the ice cream maker a few short hours ago. Having tasted it upon completion, you already know it’ll be a hit. You proudly set it between your guests and invite them to “dig in with gusto”. One guest grabs a spoon and dives at it … 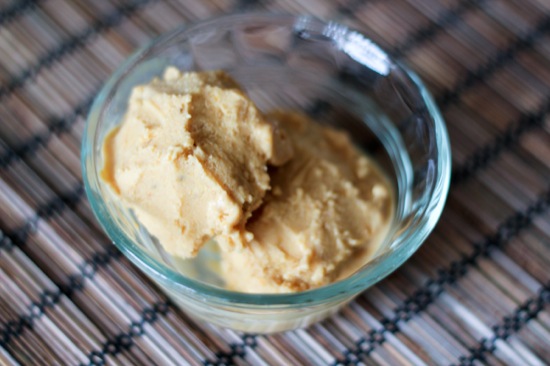 … only to be rejected by the rock-hard surface of a concrete sweet treat. That’s right, folks: the vegan ice cream you so carefully prepared and served with pride is the consistency of French bread roasting in the Sahara for about a year. I think the spoon was two molecules away from shattering on impact. Not quite the way I wanted to end our dinner party. (Yep, replace “you” with “I” and you pretty much have a snapshot of the THIH household last Friday evening. But you knew that, didn’t you? See this post.) 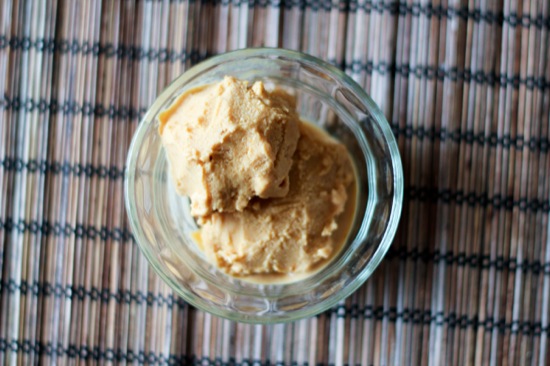 Having never made vegan ice cream before, I didn’t realize the large quantity of pumpkin puree in this batch would make the final product a block of pumpkin-flavored coconut milk (tsk tsk, Jessie). Our poor guests had to wait fifteen minutes while I submerged the bottom half of the ice cream container in blisteringly-hot water before they could hack bits off the side.

It was only after I did some research did I learn vodka or other alcohol is often added to this type of ice cream to keep it from freezing solid. Even though I haven’t tried it myself yet, I’ve added it into the recipe below. If you choose not to add it, let your ice cream sit at room temperature for at least an hour before serving (I’m not kidding. It takes concrete a long time to melt.).

And so, vegan spiced pumpkin ice cream as it SHOULD have been served (apologies, honored guests):

Combine all ingredients and stir well. Pour in bowl of ice cream maker and make according to manufacturer’s directions. OR, if you do not have an ice cream maker, pour in chilled metal bowl and freeze, stirring every ten minutes, for at least two hours.

If alcohol is not added, allow to sit at room temperature for at least an hour before serving.

Q: Have you ever tried vegan ice cream?  What’s your favorite flavor?