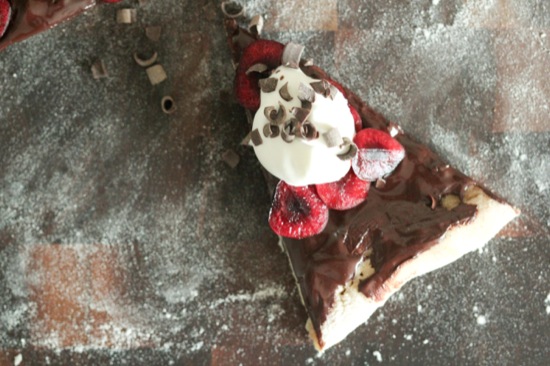 Last week, we had our friends Arden and Dan over for a night of pizza and board games (otherwise known as Living Large in Central Illinois, or LLCI. That’s an official abbreviation, by the way.) We made our usual: thin-crust tomato pizzas with plenty of garlic and smoked mozzarella, grilled to perfection on the Big Green Egg (BGE). No biggie. Just whole-grain-and-lycopene goodness (WGLG, which looks a lot like the word “wiggles”).

As for dessert … well. There’s a reason why you don’t try out new recipes on guests, even ones as understanding as our friends.

Prior to dessert execution, I was more excited than Maddles finding a stray green bean. This month’s Recipe Redux contest held the promise of LLCI with the BGE (and not just with WGLG).

Pizza Party! Give the delivery guy a day off; whether it is for Friday Fun Night with the kids, a pizza chef competition among friends, or for Super Bowl Sunday. Share your healthy pizza recipe that we can all look forward to after a long week…or a long day.

Dessert pizza immediately sprang to mind. How about a Black Forest pizza with chocolate, cherries, and whipped cream?

Yeah, that would have been nice. 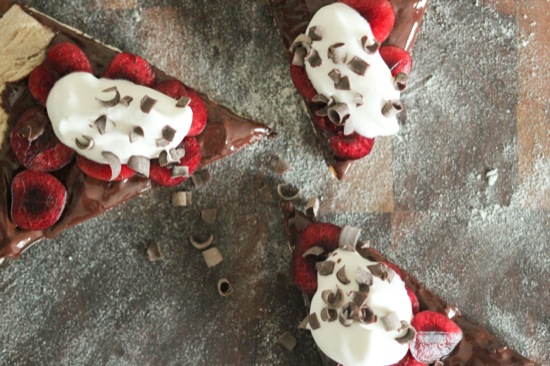 I excitedly sent Peter to pop a whole grain crust on the BGE to grill for a couple of minutes while I gathered together the remaining ingredients.

A couple of minutes, he came back inside with this. 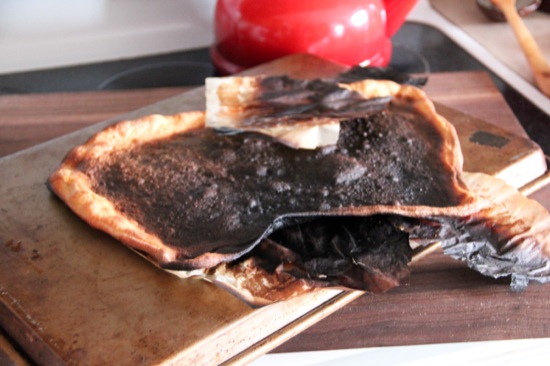 To their credit, our friends held it together pretty well. Peter, however, had no qualms about gasping with laughter. Excessively. At least, that’s how it sounded to me as I whipped up some brownies for Dessert v.2.

Fortunately, I was later able to make the Black Forest pizza without turning it into a whole grain cracker. The secret? Seriously, just make it in the oven. When it comes to naked pizza, the BGE is a DITM (disaster in the making).

Use Peter’s whole grain crust and top with cashew cream if you want a dessert with more fiber, protein, and healthy fats. And marvel in the awesomeness of having pizza for dessert.

Arden and Dan, how about pizza night #2?

Preheat oven to 400 degrees F, placing pizza stone inside oven if you have one. Otherwise, roll out pizza crust and place on baking sheet. Use a fork to poke holes all over the crust. Bake for 4 to 5 minutes, or until lightly browned. Remove from oven and leave oven on.

Place cherries into small bowl and drizzle kirsch over cherries, if desired. Once crust is cool enough to handle, spoon chocolate onto crust and spread almost to the edge. Return to oven for 1 minute.