I usually post an Update Your Plate on Fridays, but this week I wanted to share the beautiful wedding that took place last weekend of my best friend Amy. Hi Amy! 😀

The wedding was at Mohonk Mountain House in New Paltz, New York, and boy, I wish I had taken pictures of the place because it was GORGEOUS. Kind of reminded me of my high school (Emma Willard).  Peter and I flew out last Friday and came back on Sunday.  I loved being back on the East Coast for those few glorious days.

There are a lot of pictures so I stacked some together (click on the thumbnails to see larger versions). Also, I used three different cameras to take pictures during the weekend for convenience: my phone, a point-and-shoot, and my fancy camera. Can you tell which pictures are which?  I’ll have answers at the end of the post 😉

I’ll show you everything I ate during the weekend, both as an example of what I eat when I travel and to point out what I could have done better.

Breakfast on the morning of the flight: Noosa with banana, frozen blueberries, Barbara’s squares, chia seeds, and coffee. Eaten about 6:30 am before our flight out of the Champaign airport (just 5 minutes down the road — so convenient!). 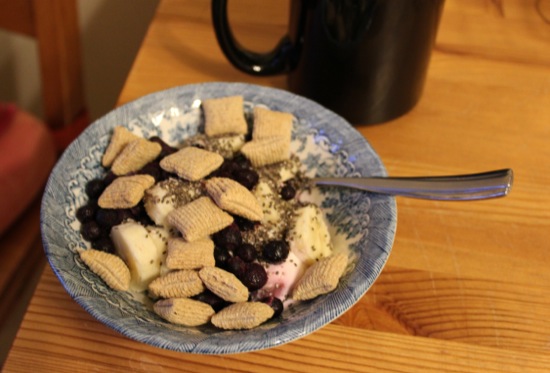 Our flight connected in Chicago.  Once we touched down, I made a beeline for Garrett’s popcorn:

I’ve only been to Chicago once before, but while there I quickly discovered how awesome this popcorn is. I also love “The Pursuit of Happiness” motto — sounds familiar, doesn’t it? I ordered a small Chicago mix (a mix of their caramel corn and cheese corn) and had a few handfuls right there. Yes, it was 9 am. Yes, it was delicious. I put the rest away for a future treat.

… except I pulled it out again soon afterward. Why?

I’ll say first that I almost always bring meals when I travel by plane, usually PB&J and fruit and veggies, sometimes something a little fancier. It’s healthier and cheaper than a lot of airport options, plus you can eat whenever you get hungry, even if you’re at 30,000 feet.

For this trip, I completely ran out of time. Happens to all of us, doesn’t it? Peter and I planned to get something to eat once we got to New York.

You’d think having grown up in New York State, I would know better than to think I would have wiggle room once we got to LaGuardia. Between taxiing, deplaning, renting a car, and traffic (so much traffic … ), we had negative wiggle room. Besides a few more handfuls of popcorn, the only thing I ate between breakfast and dinner was oatmeal from Starbucks at about 2 pm: 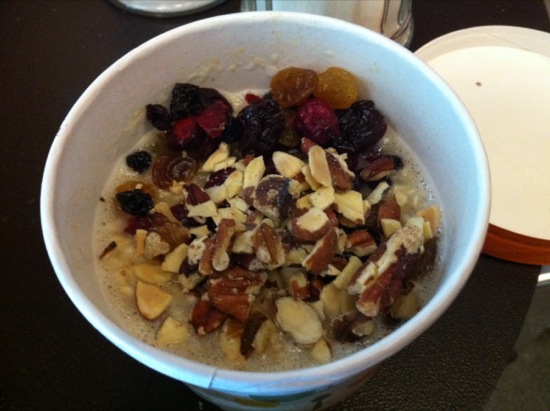 This was the first time I tried Starbucks oatmeal — not bad! I’m used to rolled oats rather than instant, but I’m glad that Starbucks is offering this now. In the future, I’ll make sure to grab at least some fruit or a granola bar before hopping on a plane.

The wedding rehearsal at Mohonk was lovely, and it was great to see Amy and (her now husband!) Frank again!  As well as Amy’s family, who have known me since I was a gawky 13-year-old. Hi from the gawky 27-year-old!

Rehearsal dinner! From left to right: Mushroom bisque (creamy!), Peter’s monkfish on potatoes, my scallops on couscous, the most delectable chocolate cake that I’ve ever had the misfortune to be unable to finish.

Mohonk serves some pretty exceptional food. I wish we could have eaten more meals there, but we weren’t staying at the Mountain House.  Instead, we stayed at a beautiful B&B called Maplestone Inn. Again, I didn’t take any pictures of the Inn, so click on the link to see how gorgeous it is.

Peter is not a big fan of B&B’s, but he really liked this one. Not only were the rooms cozy and the owners super nice, the food was exceptional.

Three course breakfast the next day! From left to right: Fruit and coffee, potato pancake with scrambled eggs & smoked salmon & fresh herbs on top, apple cider and apple muffin with vanilla frozen yogurt, sideways Peter (which should give you some clue as to what device I used to take these pictures).

I didn’t feel hungry for a long time after this incredible breakfast. The owners, Sean and Patty, are warm and welcoming, and one of their daughters is a CIA grad. They told us how they designed the breakfast menu to include a fruit, a savory, and a sweet. Sean and Patty: just … wow.  I wish we could eat breakfast with you every day.

And now, for the main event: Amy and Frank’s wedding!

The beautiful bride (how gorgeous is her hair??): 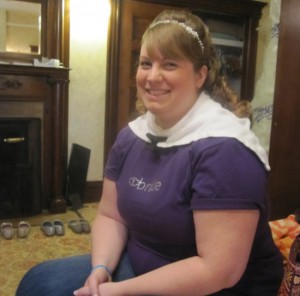 I drooled over her embroidered veil. Not literally, of course. That would be gross. 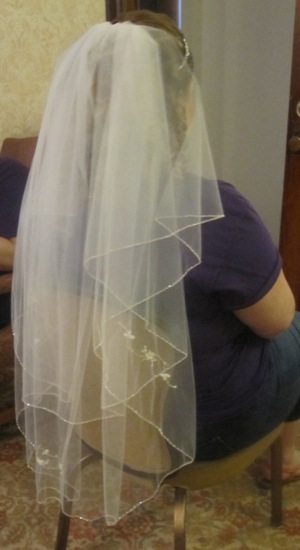 Amy gave me and other bridesmaids special “Bridesmaids” shirts, which we had to cut off after our hair was done.  Here’s Amy’s sister Jill making my shirt into a snazzy boatneck: 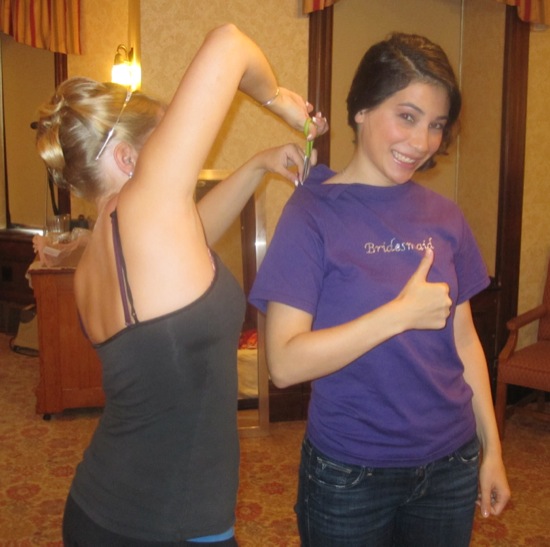 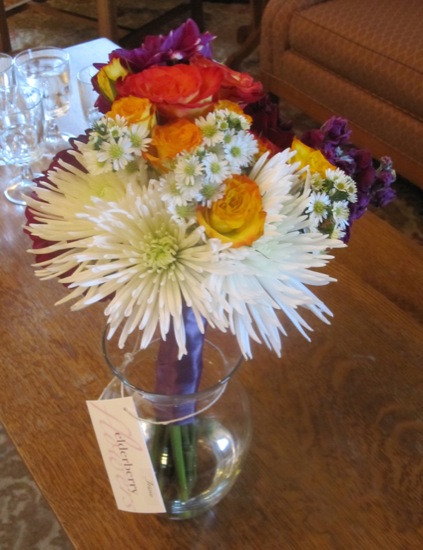 Amy got us all room service lunch, which I was totally stoked about because I’ve never ordered room service before.  I felt like such an awesome diva.  I ordered this grilled chicken sandwich and ate about half because I was still working on breakfast. 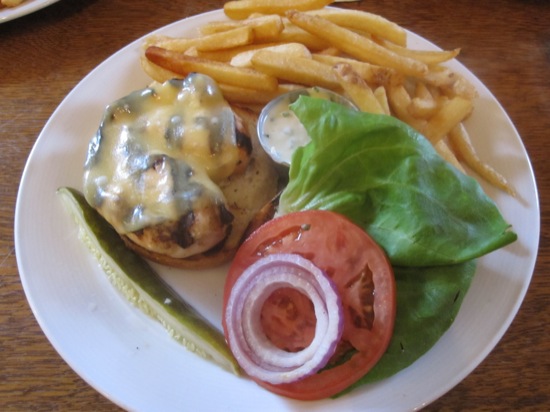 Ceremony pics!  I had given one of the cameras to Peter to take pictures (can you guess which one? Hehe 😉 ).  He managed to capture a picture that’s a cross of me getting all teary-eyed at seeing Amy walk up the aisle and slightly pissed that he was taking a picture at that moment. THANKS, PETER. 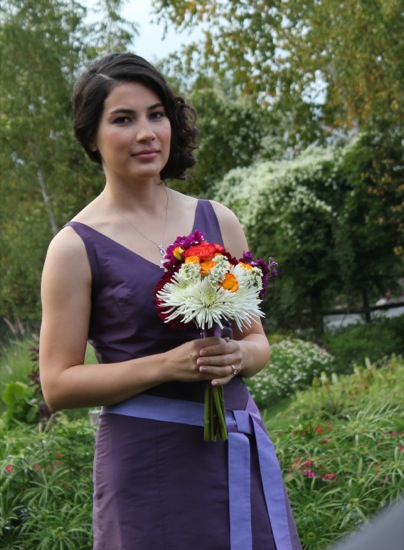 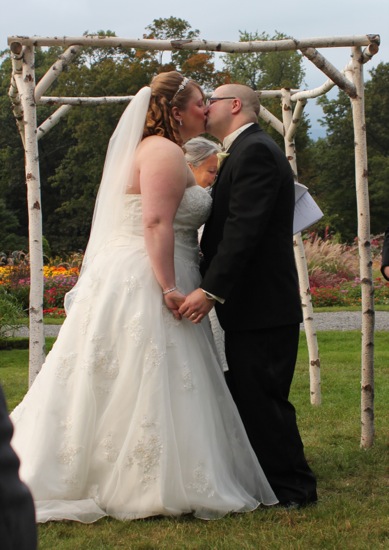 This is a beautiful shot of Amy’s dress: 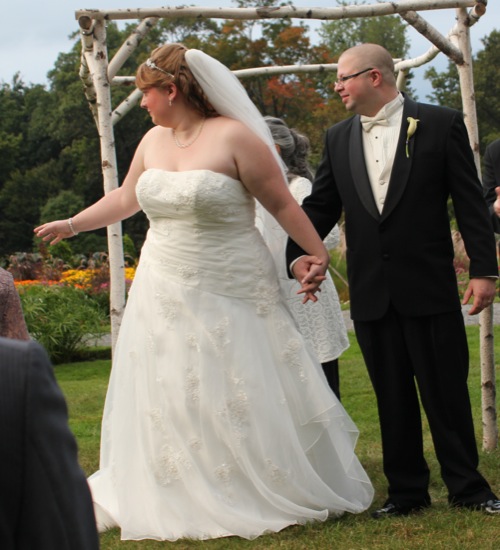 I got to walk out with two guys on my arms. Is that a self-satisfied smirk I see, Jessie?

Peter and I were running around so much that we didn’t take many pictures during the cocktail hour. Peter took these of the lake next to Mohonk.  Apparently, New Paltz is near one of the highest ranked places for rock-climbing in the country (Thanks for that factoid, Henry 😉 ).

“If you don’t hurry up, we’ll miss the appetizers!” 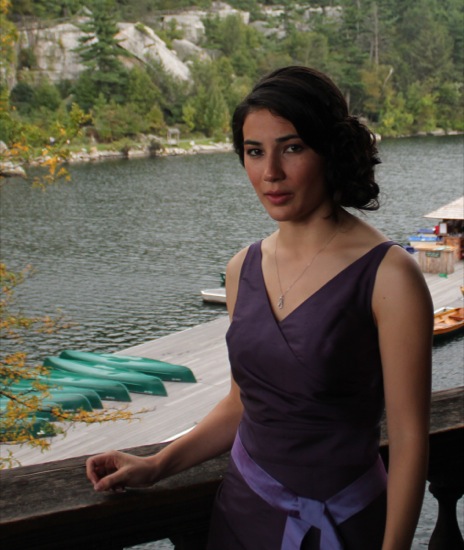 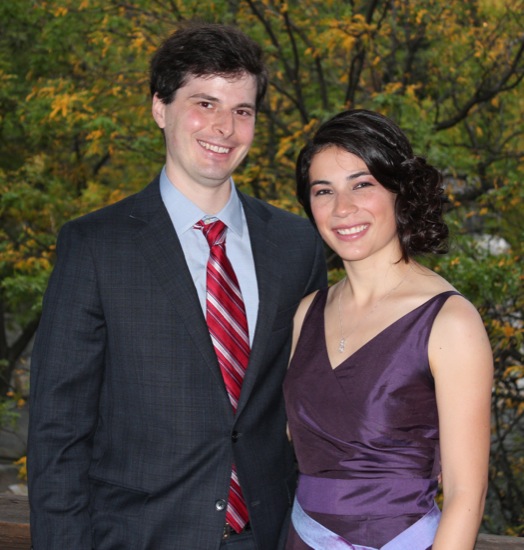 There were some unpictured cheese puffs eaten with an awesome white sauce. Good job investigating the food, Jessie!

Next was the reception, where I was so completely into chatting with Amy’s family that I took very few pictures.

From left to right: Adorable wedding favors from my old stomping grounds, our centerpiece, our autumn-themed table card (definitely going in the photo album), the menu. Note the menu, because you won’t actually see any of the items in person.

From left to right: Except for the sweet potato bisque — so good, beautiful wedding cake, the Mohonk topper, the cake with OMG incredible! chocolate layers. I ate Peter’s and mine. 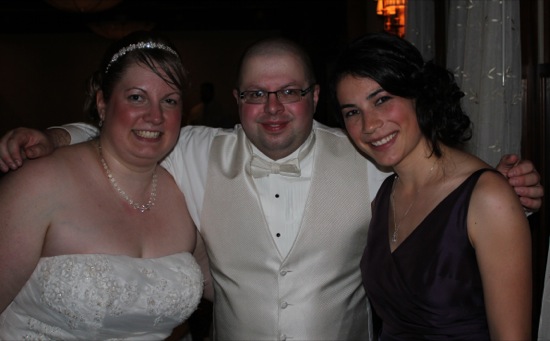 Congratulations, Amy and Frank!! Your wedding was gorgeous and perfect 🙂

When we got back to the Maplestone B&B after partying it up, I wanted to take a picture of the back of my hair because (a) I’ll never be able to do it again, and (b) it was just so much fun!

Breakfast at Maplestone the next morning!

We’ll definitely go back to Maplestone Inn if we’re ever in New Paltz again.

We left New Paltz right after breakfast so that we’d have time to meet up with our friends Henry and Rebecca in Flushing for some dim sum. Apparently, I was so excited to see them that I forgot to take any dim sum pictures. Just picture char siu bao and dan tat and you’ll have a good idea what it looked like.

Our eating schedule was a little wonky that day. After such a large breakfast and dim sum at about 10:30 am, we didn’t get hungry until we were back in Chicago at about 4 pm. We ordered sandwiches from Rick Bayless’ place and ate them on the plane. My spice tolerance is about -2 on a scale of 1 to 10, so I gave Peter some of mine.

When we got home, we crashed into bed and slept like logs! Too much travel wears a Happy Jessie and Peter out.

P.S. Did you figure out which camera went with what? The answers:

P.P.S. A huge congrats to Gina on her upcoming wedding this weekend!!